Baseball Takes Both Ends of Doubleheader Over James Madison 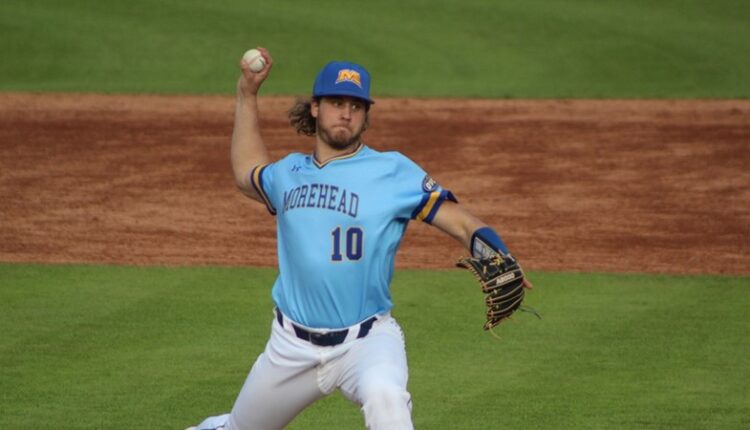 The Eagles (7-8) hammered seven home runs, while a combo of seven MSU pitchers held a powerful Duke (8-8) batting order to just nine total hits on the day. The teams were scheduled to play the third game in the Sunday series but due to impending winter weather, that game was canceled.

While JMU lit the run column first with a tally in the first inning, crooked numbers by the Eagles in the second and fifth frames proved to be enough as starter Luke Helton (1-1) combined with relievers Jarrett Miller (1.1 IP, 0 R , 1 K) and Joe Rotkis (1.0 IP, 0 R, 1 K) to shut down the Duke hitters.

MSU took a 3-1 lead in the second as right-fielder Chase Vinson singled to lead off, stole second base and later scored when Colton Becker’s grounder to third was misplayed. Preece then cleared the bases with his first long ball of the day – and fourth of the year – a smash to center field.

The Dukes crept to within 3-2 in the fifth, but Roy’s three-run circuit clout gave his team some distance in the bottom of the inning. Becker later scored on back-to-back wild pitches from JMU’s Hunter Entsminger.

Miller entered with the bases loaded in the fifth but coaxed a fly out to end the threat. He got three straight outs in the sixth to lower his season ERA to 0.75. Rotkis slammed the door with a fly out, strike out and ground out to seal the win.

Kuntz was 3-for-4, while Becker, first baseman Jackson Feltner and left-fielder Alex Jacobs all had two hits.

Five home runs and multi-run innings in five of the Eagles’ at-bats spelled success in the nightcap. Preece, Feltner, Roy, Jacobs and third baseman Nick Gooden all took JMU pitchers out of the park.

On the mound, Rotkis (1-1) – who was scheduled to start one of the games this weekend – actually picked up the win in relief. Starter Alex Kafka went 4.0 innings before running into trouble. Rotkis came in and tossed 1.1 innings with two punchouts. Closer John Bakke shut down the Dukes in the final two innings. While not a save situation, Bakke struck out three. Grant Herron also worked a scoreless frame.

Roy cranked his second three-run bomb in the second, Jacobs had a two-run homer in the fourth, Preece drove in a pair on a homer in the fifth and Feltner and Gooden hit mammoth solo home runs in the fourth and sixth, respectively .

Roy and Gooden also added RBI singles as the Eagles roughed up six JMU pitchers for 17 hits, the second highest total in 2022.

A scheduled game at Western Illinois Tuesday has ben canceled as well, but the Eagles picked up a 3 pm ET solo contest at Saint Louis Wednesday. The Spring Break game is on the way to a three-game series at Kansas State next weekend.

WATCH NOW: Kenosha County spends more than $32,000 to defend against redistricting lawsuit brought by own board supervisors | Government & Politics