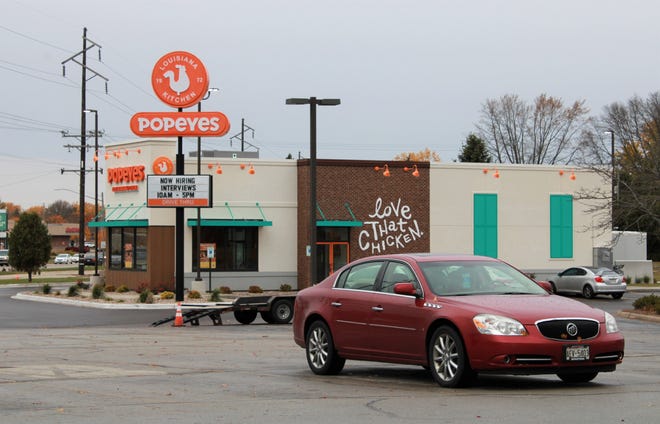 GREEN BAY – After a year of delay, the people of Green Bay will get to enjoy Popeye’s Louisiana Kitchen Cajun fries and its other items early next month.

Popeyes has been in the works at 1979 Main St. − where Wally’s Spot Supper Club had been until it closed in July − since April last year. Franchise owner Marc Rodriguez said the restaurant was supposed to open last year, but shipping delays and supply chain issues slowed down construction.

Usually, it takes about 100 days to finish construction, he said, but for this building they had to wait nine months for electrical components to arrive. He had cited similar waiting times for the Oshkosh Popeyes, which he also had to delay opening due to lack of equipment. That location opened in September.

Rodriguez has set Nov. 8 as the Mason Street Popeyes’ opening date, although he is still trying to track down a few pieces of equipment.

“If everything works in our favor, we’ll be open,” he said.

The company is currently in the hiring process and Rodriguez said he expects to have as many as 50 employees at this location.

“They’ll complete the hiring (process) in the next couple of weeks,” he said.

Once opened, its hours will be 10:30 am to 10 pm every day. The restaurant’s menu is available at popeyes.com.

The new franchise is the second Popeyes location in Green Bay, with the first on the west side at 1860 W. Mason St.

Ariel Perez is a business reporter for the Green Bay Press-Gazette. You can reach him at [email protected] or view his Twitter profile at @Ariel_Perez85.

Racine man accused of breaking into woman’s house, headbutting her, then stealing her phone and gun