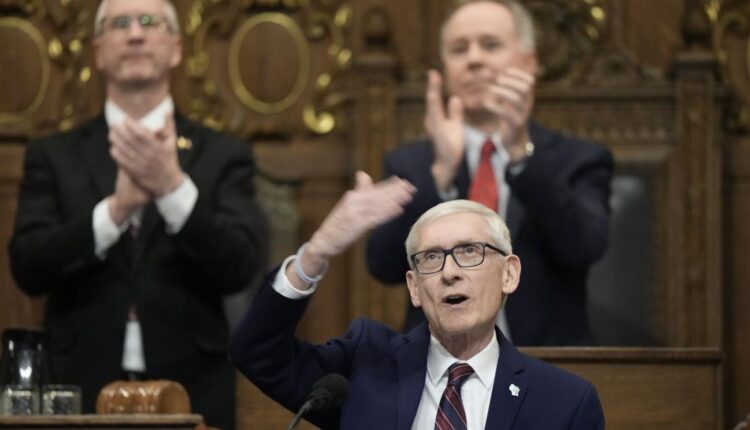 State legislators are splitting along party lines in their support or opposition toward Gov. Tony Evers and his plans for increased spending on mental health, education and the environment.

The governor’s fellow Democrats in southeastern Wisconsin applauded the ideas he outlined Tuesday night in his State of the State address, while area Republicans criticized and vowed to fight his proposals.

It was Evers’ first State of the State address since his re-election last November, when he defeated Republican challenger Tim Michels by nearly 100,000 votes despite a well-funded GOP effort to oust him.

The two-term governor Tuesday announced plans to use a projected $6.9 billion budget surplus to boost spending by about $1 billion for some of the programs and services he highlighted during the campaign. That includes $500 million for mental health services, $100 million to combat chemical pollution, and $20 million to recruit teachers as part of a broader commitment to public schools expected to total $2 billion long term.

State Sen. Bob Wirch, D-Somers, said Evers set the tone for bipartisan cooperation in using the state’s historic $6.9 billion budget surplus to “do some big things.” Wirch mentioned education, homelessness, mental health and the environment among the areas where he hopes to see progress.

“I’m cautiously optimistic that Republicans seem more open to working with the governor and us legislators on the other side of the aisle than they did last session,” the Kenosha County Democrat said. “If that’s the case, we could do some real good for the people of Wisconsin.”

“By working together, we can pass legislation that will have a positive impact on the lives of Wisconsin families,” Ohnstad said.

Other local officials and leaders also welcomed the governor’s state of the state address as a chance to get things done in state government.

Kenosha County Executive Samantha Kerkman, who formerly served as a Republican in the Legislature, said she was gratified to hear the governor emphasize mental health services, an issue Kerkman said the county is addressing, too. Kerkman said she hopes for “common ground” to emerge in Madison on essential government services.

“I urge the governor and the legislature to find a workable solution for everyone involved,” she said.

McGuire called it “a stark contrast to Republicans’ plan to provide massive tax cuts for millionaires and billionaires while leaving our small businesses, working families, and communities behind.”

Among those voicing support for the plans presented in the State of the State address was State Rep. Greta Neubauer, D-Racine, the current Assembly minority leader, who said the Democratic governor had offered “a visionary plan to make sure Wisconsin will continue to grow and drive.”

“The next four years will be crucial to the long-term success of Wisconsin,” she said. “And I’m so glad that Governor Evers is at the helm to lead us.”

Evers’ presentation, however, ran into immediate criticism from area Republicans.

State Sen. Van Wanggaard, R-Racine, who also represents parts of Kenosha County, accused the governor of hurting education and mental health in Wisconsin with “mandatory school closings,” a reference to temporary statewide closures that occurred during the COVID-19 pandemic as a way of controlling the spread of the deadly virus.

Wanggaard also criticized Evers for not discussing the current state of inflation in the economy, and for not doing more to address public safety.

“In the end, his speech took credit for ideas he had nothing to do with,” the Republican senator said, “and contained nothing more than spending $1.2 billion in liberal spending ideas, bigger government, and little in the way of details.”

Another area Republican legislative leader talked about bipartisan cooperation, but also said the GOP is ready for a fight.

State Rep. Tyler August, R-Lake Geneva, the Assembly majority leader, said Republicans in the legislature — not Evers — are responsible for the state’s budget surplus. August said he and his fellow Republicans will “fight for common-sense values ​​and priorities.”