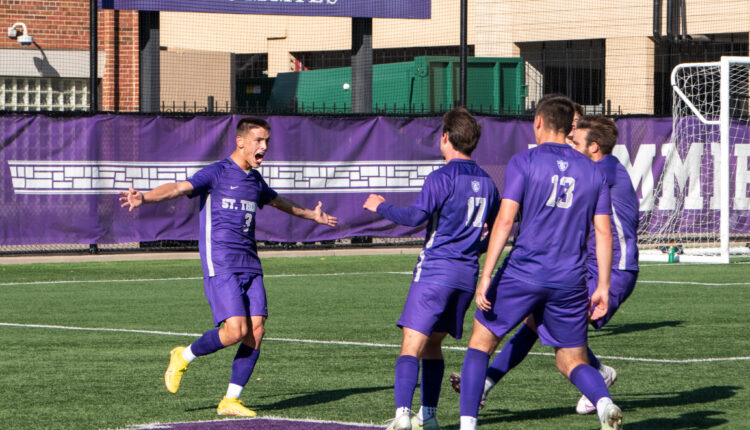 The Tommies (1-6-1, 0-0 Summit) faced off against the Phoenix (3-2-2, 0-1 Horizon) in their second home match of the season. This was the Tommies’ last game before conference play starts on Saturday.

“Over the last couple of weeks, we were just missing some important moments,” coach Jon Lowery said. “I thought today was a much more complete performance.”

Green Bay opened scoring in the sixth minute as senior forward Michael McDougall scored on the Phoenix’s second shot of the game.

The Tommies responded in the 15th minute with Nickowski’s goal to even the score at one goal each. Nickowski’s goal came after he broke free from defenders due to a smart play from sophomore defender Charlie Holton.

“That’s textbook St. Thomas soccer right there,” Lowery said. “That was a high-level goal that Charlie started for us.”

Both defenses held for the remaining 75 minutes as Green Bay outshot St. Thomas 6-5 in the contest. The Tommies couldn’t maintain consistent control of the ball in the second half, often going for aggressive passing.

“I think we saw some really rushed choices in the final third today offensively,” Lowery said.

The Tommies open conference play at South Field on Saturday at noon against Eastern Illinois.

“We want to finish high up the Summit League,” Lowery said. “If we can get three points on [Saturday] that starts us in the direction we want to go.”

Sam Larson can be reached at [email protected]
Anya Capistrant-Kinney contributed to this report.

Store that helps children in need, finds itself in need of help