The Good, Bad And Ugly From The Green Bay Packers’ Win Over The Chicago Bears 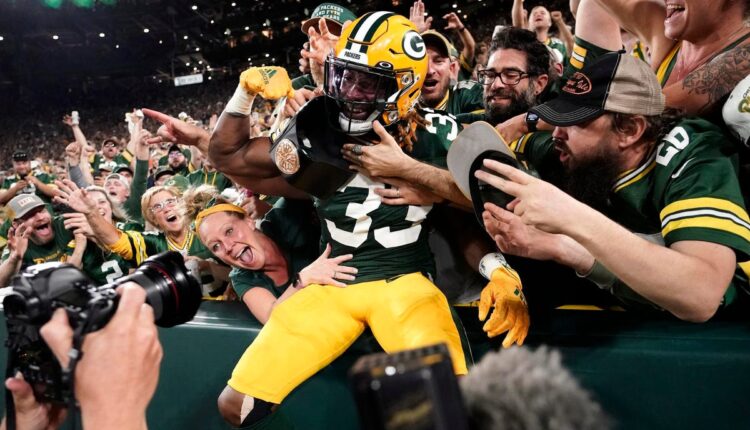 Green Bay Packers running back Aaron Jones (33) celebrates with fans after scoring on a 15-yard … [+] touchdown run during the first half Sunday.

Twelve months ago, the Green Bay Packers had a dreadful Week 1 performance and were routed by New Orleans, 38-3. The Packers responded with a 35-17 win over Detroit, rolled off seven straight wins and eventually earned the NFC’s No. 1 seed.

This year, Green Bay was almost as dreadful in Week 1 when it lost to Minnesota, 23-7. Following a similar script, though, the Packers rebounded with a 27-10 win over Chicago Sunday night.

Whether or not these Packers can catch fire like the 2021 squad did remains to be seen. For one night, though, Green Bay gave its faithful reason for hope.

Here’s the good, bad and ugly from Green Bay’s victory.

AARON JONES: Green Bay’s explosive running back had just five carries in Week 1, and everyone inside 1265 Lombardi Ave. insisted it wasn’t enough.

Jones showed why on Sunday, when he was the best player on the field.

Jones carried 15 times for 132 yards — a whopping average of 8.8 yards per rush — and had a 15-yard touchdown run. Jones also caught three passes for 38 yards and had an 8-yard touchdown reception.

“I’m not frustrated,” Jones said after Green Bay’s Week 1 loss to Minnesota. “I just do what I can when my number is called and make the most of every opportunity I get.”

On Sunday, Jones got plenty of opportunities — and made the most of them.

AARON RODGERS: The Bears’ principal “owner” was back it Sunday, tormenting his rivals from the south.

Rodgers completed 19-of-25 passes for 234 yards and two touchdowns. He completed a career-high 14 straight passes and finished with a quarterback rating of 131.1.

Rodgers was particularly good in the first half when he completed 13-of-19 passes for 164 yards, two touchdowns and no interceptions.

Along the way, here are some other marks Rodgers has hit:

• Rodgers has won seven straight starts against Chicago and 11 of 12.

• Rodgers has posted a 100-plus passer rating 15 times against the Bears and the Packers are 15-0 in those contests.

• Rodgers has thrown 63 touchdowns against Chicago, more than any quarterback in history against the Bears.

• Rodgers has gone seven straight games without an interception against Chicago (minimum 15 attempts), the longest streak ever vs. Chicago.

In October, 2021, Rodgers capped a game-clinching drive in Chicago with a 6-yard touchdown run. He then ran near the stands, found some hecklers and hollered: “I’ve owned you all my (bleeping) life! I own you! I still own you!”

ELGTON-JENKINS: Less than 10 months after the Packers’ All-Pro tackle suffered a torn ACL, he was back on the field.

Jenkins started at right tackle, which sent Royce Newman to right guard and Jake Hanson to the bench.

The return of Jenkins is a huge boost for a Green Bay offensive line that continues to operate without left tackle David Bakhtiari.

In 2020, Jenkins played 828 snaps at left guard, 97 at center, 32 at right tackle and 27 at left tackle. He handled every assignment with aplomb and was selected to his first Pro Bowl.

Jenkins became the first Green Bay offensive lineman to start a game at guard, center and tackle in the same season since the 1970 merger. And in 733 pass blocking snaps, Jenkins allowed just one sack.

This summer, Jenkins was taken off the Physically Unable to Perform list midway through training camp. And he was back on the field in Week 2.

“Certainly when you have a player of Elgton’s caliber that frees you up and gives you a lot of flexibility to truly put the best five out there,” Packers coach Matt LaFleur said.

COMING UP BIG: Chicago trailed, 24-10, when it drove to the Packers’ 1-yard line midway through the fourth quarter. On fourth-and-goal, the Bears lined up in shotgun and called a run for quarterback Justin Fields.

Fields fought within inches of the goal line, but Green Bay’s Preston Smith and Jarran Reed denied him. Chicago challenged the ruling, and replays showed that Fields might have snuck in. But there wasn’t conclusive evidence to overturn the call, and Green Bay’s defense held on one of the biggest plays of the night.

RESPECTABLE SPECIAL TEAMS: When Chicago came to Green Bay in Week 14 last season, the Packers’ special teams had one of the most embarrassing nights in franchise history. Among the blunders were:

• Chicago’s Jakeem Grant returned a punt 97 yards for a touchdown.

• The Bears’ Khalil Herbert averaged 41.0 yards per kickoff return on his two first half attempts.

• Chicago finished the first half with 213 yards on special teams, while the Packers had a measly 19.

On Sunday, the Packers held the Bears to 23.0 yards per kick return and didn’t allow any punt return yardage. Green Bay punter Pat O’Donnell also averaged 61.0 yards per punt against his former team.

At worst, Green Bay earned a draw on special teams. And considering where the Packers were a year ago, that’s equivalent to a win.

THIS AND THAT: Green Bay had 26 first downs, while the Bears had just 11. The Packers also held a 414-228 advantage in total yards and a 66-41 edge in total plays. … Sammy Watkins had a big game with three receptions for 93 yards. … Outside linebacker Preston Smith had two sacks, while outside linebacker Rashan Gary had a sack and two tackles for loss.

OPENING DRIVES IVES : One week after Minnesota marched 78 yards in 10 plays for a touchdown on its opening drive, the Bears went 71 yards in seven plays for a TD on their first possession.

Chicago running back David Montgomery had four carries for 38 yards on the march, and quarterback Justin Fields hit Equanimeous St. Brown for 30 yards on a flea-flicker. Fields then capped the march with a 3-yard touchdown run.

Underrated running back David Montgomery had a huge night with 15 carries for 122 yards. Fields also ran for 20 yards and a touchdown.

The Packers’ rushing defense has been a problem area for years now, and it still remains a problem.

FUMBLE ITIS: The Packers had two fumbles in the third quarter and lost one.

Aaron Rodgers fumbled on a handoff to AJ Dillon with nine minutes left in the quarter and the loose ball was recovered by Bears defensive lineman Mike Pennel, an ex-Packer.

Then late in the third quarter, a shotgun snap by Green Bay center Josh Myers hit wideout Christian Watson, who was in motion on the play. The ball caromed backwards and was recovered by Dillon, but Green Bay lost 13 yards on the play.

DAVID BAKHTIARI: The Packers’ All-Pro left tackle suffered a torn ACL during a practice on Dec. 31, 2020. That was 626 days ago.

Many expected Bakhtiari would be back for Sunday’s home opener. But that didn’t happen — and this strange story is only getting more bizarre.

Bakhtiari has had at least three procedures done on his knee since suffering his injury. He returned in Week 18, 2021, against Detroit, but was unable to play two weeks later when the Packers lost to San Francisco in the NFC divisional playoffs.

Bakhtiari practiced on Wednesday and Friday this week and was listed as questionable. But the Packers determined he wasn’t ready to play on his home field against a mediocre defense.

Next week, the Packers head to Tampa Bay, which has one of the NFL’s top defenses and a handful of elite pass rushers. Would Green Bay trot Bakhtiari out for the first time in 10 months against a defense of that level?

That remains to be seen. For now, anyhow, the Bakhtiari saga continues.

“Oh it’s a nightmare,” Bakhtiari said during training camp. “My nightmare that I have to live and I don’t know how many days it’s been, but I’m just excited to wake up one day.”