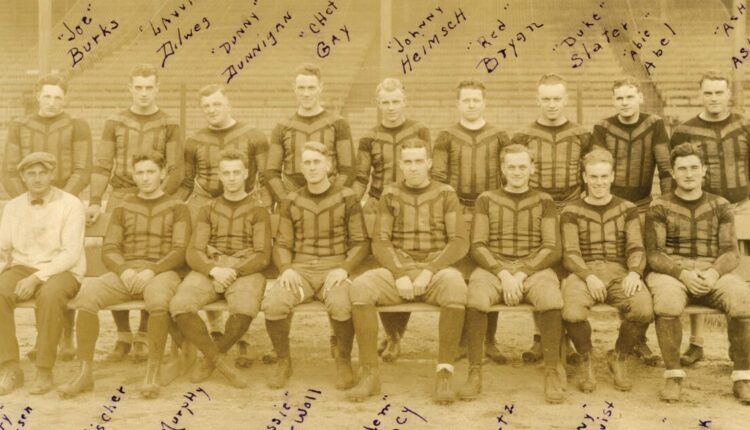 As the Packers took on the Bears and celebrated another victory against the rival team, there was another Wisconsin NFL team celebrating a special anniversary. The Milwaukee Badgers are celebrating the centennial anniversary of their founding. If that name sounds unfamiliar it’s because it was a short-lived franchise and one of the first in NFL history.

At the time the team was founded, Milwaukee was the third largest city in the league. Although football was popular, historian Matthew Prigge says most people were fans of the college teams and pro-football was still getting its footing.

“For the professional game, in a lot of places, it trailed behind not only college football but also just high school football, local company teams would often draw more than the pro-clubs would, and the NFL… was really pretty small regionally, it was mostly the midwest,” says Prigge, who wrote about the Milwaukee Badgers for this month’s Milwaukee Magazine.

Photo courtesy of the public domain

Unlike baseball or hockey in the 1920s, football wasn’t racially segregated, and some of the Milwaukee Badgers’ biggest stars were Black, including Fritz Pollard—who became the first African-American coach in the NFL in 1921—the season before he started coaching the Badgers. Pollard was inducted into the NFL Hall of Fame, along with Milwaukee Badgers players Duke Slater, Johnny “Blood” McNally, and Jimmy Conzleman.

Unfortunately, the Badgers had difficulty keeping any of their star players, due to their financial difficulties. The team folded in 1926, after just 4 years and the Green Bay Packers became the unlikely champions of the race to become Wisconsin’s football team.

Prigge explains, “[The Badgers] were never really able to compete with the Packers on the field or financially, you know their owners had so long hoped to build up a rivalry with Green Bay that could… sustain the rest of the season and generate interest, but they were just never able to keep up.”

Have a question you’d like Lake Effect to investigate? Submit below.