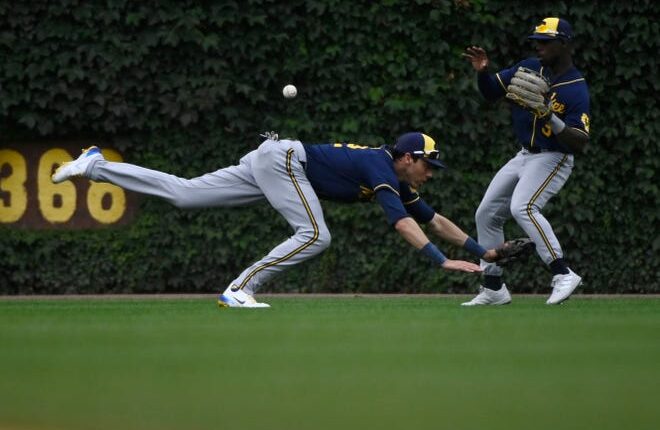 CHICAGO — The exchange of the ball from glove to hand resulted in a fumbled opportunity.

That’s precisely what much of the last three months have been for the Milwaukee Brewers, too.

Christian Yelich’s bobble on a shallow pop fly in the top of the 10th inning that helped send the Brewers to a 6-5 defeat in 11 innings was something of a microcosm of the team’s play over what is now an extended period of time.

After getting off to the strongest 50-game start in franchise history at 32-18, Milwaukee found itself in a golden situation. Since then, though, the Brewers have failed to make the most of it. Time and time again, the team finds itself in tight, competitive games. As their record since that start – seven games under .500 – would indicate, the execution has often been missing in those moments.

It certainly was Saturday afternoon.

The Brewers offense was almost entirely silent through 7 2/3 innings against Cubs starter Marcus Stroman. When they did get the big hit, including a two-run go-ahead homer by Willy Adames moments after Stroman departed in the eighth, it was given right back.

Without Yelich’s gaffe in left field, the Brewers would have won, but it was far from the only reason they lost a contest in which they blew a save in each of the final three innings.

“I don’t really know what happened,” Yelich said. “I went to pull it out of the glove and obviously didn’t.”

As pitcher Aaron Ashby said in the wake of Friday’s 8-7 loss at the hands of the Chicago Cubs, the Brewers believe they are the better team of the two. The standings would indicate the same sentiment.

The results don’t quite agree.

The Cubs have had their rival’s number of late, and they aren’t the only team buried in the NL Central standings that can say that. Against the bottom three teams in the division – Chicago, Cincinnati and Pittsburgh – Milwaukee has dropped 11 of its last 14.

More:The Brewers got a critical piece behind the plate back from the injured list with the return of Omar Narváez

And the latest one may have been the most deflating yet.

Catcher Willson Contreras’ walk-off single in the bottom of the 11th put permanent marker to 6-5 Chicago win, sixth by the Cubs in the last seven games against the Brewers. It came after Devin Williams couldn’t hold a one-run lead in the ninth, a confluence of poor defensive execution allowed the Cubs to tie it in the 10th and a pair of hits off Peter Strzelecki spelled doom in the 11th.

It was the 11th loss by the Brewers since the trade deadline. Those losses have been by a combined 20 runs. Milwaukee is still .500 since the all-star break, doing its best to tread water in the wild card standings, but it has been swift blow after swift blow.

A team that was four games up in the division as recently as July 30 could find itself five games back with a St. Louis Cardinals win Saturday night. Milwaukee, of course, still has time and entered the day only one game back of San Diego for the final wild card spot but it will need to reverse its course from the past three months.

“This is where we’re at,” Brewers manager Craig Counsell said. “We’ve kind of put our backs up against the wall a little bit and you have to respond. That’s the baseball season and that’s our job moving forward.”

Williams struggled uncharacteristically after entering the ninth with a 3-2 lead thanks to Adames’ go-ahead two-run homer in the eighth. A one-out walk to cap a 10-pitch plate appearance by Patrick Wisdom was the first sign of trouble. From there, it was a mixture of trouble locating the fastball and the Cubs spoiling off pitches.

“They made me throw a lot of pitches,” Williams said. “They battled me pretty tough. There’s really no easy outs today. They made me work for it.”

All with two outs, Williams walked pinch-hitter Rafael Ortega, gave up a game-tying bloop single to Nick Madrigal with two strikes just over the outstretched glove of second baseman Wong.

“He fouled off some good pitches, good for him,” Williams said of Madrigal’s at-bat. “And he put a decent swing on an up-and-in fastball and was able to get it over the infield.”

After Williams walked Willson Contreras, it spelled the end of his day at 37 pitches. Taylor Rogers relieved him and struck out Ian Happ looking to send the game to extras, where Mike Brosseau gave the Brewers a 4-3 lead in the top of the 10th.

The Cubs tied the game with a major assist to the Milwaukee defense in the bottom half. After Seiya Suzuki failed to advance the inherited runner, Ian Happ, to open the inning, Happ stole third when Rogers paid no attention to him at second.

That proved costly when Franmil Reyes hit a pop up to shallow left that was gloved by Yelich. Happ appeared to only be bluffing a tag from third but Yelich muffed the ball on the exchange, allowing Happ to scamper home with ease.

“I wasn’t looking at (Happ),” Yelich said. “I was just trying to get it out of my glove and just get it towards the plate. I didn’t know if he was going to run or not. I was catching it, grabbing it and was either going to throw it to the plate or ‘Wicho’ (Luis Urias) was the cut.

“It can’t happen. You can’t drop that ball right there. Nothing you can do about it now.”

Happ himself said he wasn’t even sure if he was going to attempt to score had Yelich made a clean throw. Counsell wasn’t so unsure.

Had Happ not stolen third or Yelich not dropped the ball, the run never would have scored; immediately following Reyes’ ball, Nico Hoerner flew out to center ended the inning.

It came back to haunt.

Milwaukee reclaimed a 5-4 lead on Wong’s RBI fielder’s choice in the top of the 11th but the offense failed to tack on from there, stranding two runners an inning after Andrew McCutchen grounded out with the bases loaded and two outs.

Wisdom doubled to lead off the bottom half against the rookie Strzelecki and moved to third on a sacrifice bunt. With two outs and two strikes, Contreras once again came through, lining a single to the right to plate Rafael Ortega, who had been intentionally walked.

It wasn’t the only time Contreras hurt the Brewers. Freddy Peralta made what was his best start since returning from the injured list earlier this month, going six innings while allowing four hits and three walks with five strikeout, but a two-out, two-run Contreras homer in the fifth put a blemish on his line.

“I think Freddy pitched really well. Just overall, really well,” Counsell said. “Did everything well, got us through six innings which is great. Definitely a good start.”

Peralta’s counterpart was a tick better. Stroman faced 25 straight batters without allowing a base hit after Adames shot a single through the right side of the infield in the first inning. The next hit he allowed was also his last, a two-out rocket of a single by Yelich in the eighth.

This year, the Brewers are batting just .100 (6 for 60) against Stroman across three starts.

“What he does well is where the ball is down and it’s kind of going in every direction,” Counsell said. “It’s going in, away, down so the ball’s on the ground a lot. Against him you gotta find some holes and we didn’t find holes. He stayed down and he was really stubborn with the ball down.”

Cubs manager David Ross removed Stroman from the game after that. The move backfired when Adames sent a 3-1 fastball out to left-center to make it 3-2, Milwaukee.

The Brewers were lined up for a critical victory following Matt Bush’s clean bottom of the eighth on the mound.

A win was there for the taking. They couldn’t find the handle on it.

“That was a tough one, one that we should have won,” Yelich said. “If I do my job, we probably win that game.”