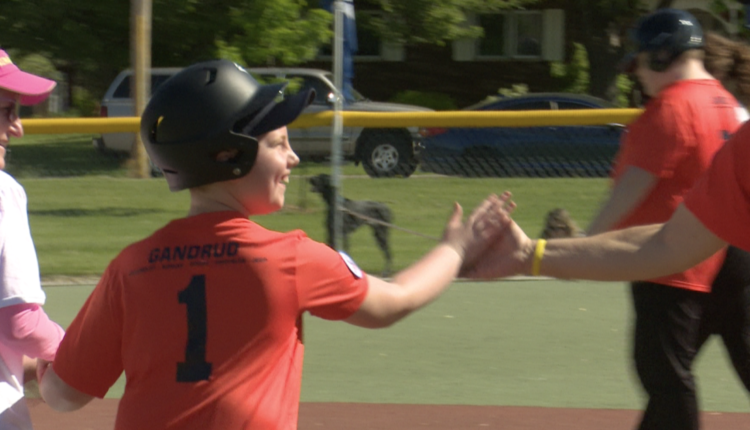 GREEN BAY — The Miracle League of Green Bay had their opening day on Saturday, kicking off their season early in the morning at the Resch Miracle Field in Allouez Optimist Park.

The league embarks on their sixteenth season giving kids with mental or physical challenges the ability to play on a real team and they get major league look alike uniforms.

“All the positivity and energy that everyone gives here, it’s really amazing just to be out here,” said volunteer Alexandra VanCalster who is a sophomore at Preble High School.

“There’s one moment during the game that you have to see to really appreciate,” said Gary Rogaczewski, the executive director of the Miracle League of Green Bay. “It’s when they hit the ball. That’s their one moment of pure joy and the smile on their face, you can’t wipe it off.”

For some kids, it’s their first season back after a few years off because of the pandemic and for others, they just couldn’t wait for the season to start.

“To be honest, every time I drove past here going to school, I said, ‘when is baseball starting? I really want to play again,’” said pitcher Zoe Shephard who started on the mound for Team Astros.

“My favorite part was hitting,” said Holland Verbeten who is an outfielder for Team Astros. “I really like baseball. I’ve been here since I was like four.”

There’s 195 kids participating on 16 teams this year and the program has 400 volunteers. Each player is teamed up with a buddy.

“It’s so much fun working with her, she’s a fun buddy” Verbeten said of her buddy Cara Francois.

“We’ve been partners for I think four or five years,” said Franciois who attends UW Milwaukee. “It makes me so happy. She is such a little bundle of energy. She’s a ray of sunshine.”

For one set of buddies, they’re cousins ​​who have been working together for a few years

“She’s amazing just to be with – all the cartwheels down here – it’s just amazing,” VanCalster said.

“To be honest, really exciting – I don’t think I’ve ever hit a ball that far,” Shepherd said about her home run.

“Do it because it’s one of the most amazing things that I have probably ever done so far and I really really enjoy it,” Vancalster said about people who might be thinking of volunteering.

“Just get on the field and play,” said Shephard about having more kids sign up to play.

Today was also the last day for founder Paul Liegeois with the organization. In an emotional moment he threw out the first pitch to his son who gave a touching speech before the games kicked off on Saturday morning.

If you want to check out the action, their games will be played Tuesday through Thursday at the Resch Miracle Field in Allouez Optimist Park. If you like to find out more you can click here.