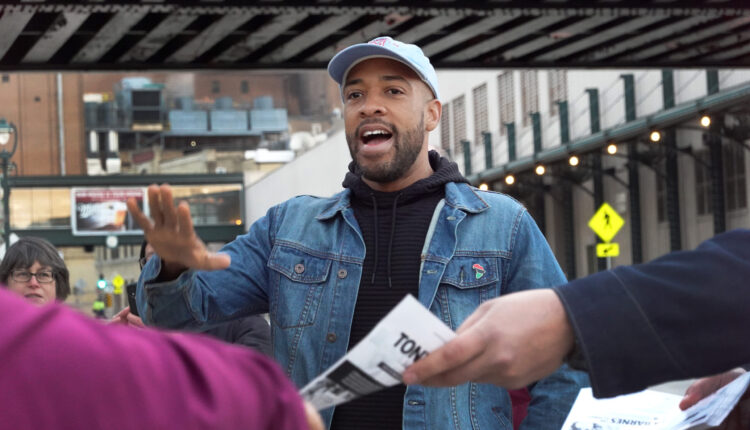 WASHINGTON —  Control of the U.S. Senate remained unclear early Wednesday as races in a handful of swing states in the midterm elections were still too close to call, and it appeared it might be days — or even weeks — before a final result was known.

But Democrats flipped the open Pennsylvania Senate seat, which Republicans have held for years, signaling the party may hold onto that chamber for another two years, though likely with a narrow majority. Lt. Gov. John Fetterman, a Democrat, defeated celebrity TV doctor Mehmet Oz, a Republican, with 50% of the vote compared to Oz’s 48%. The seat opened up after Republican U.S. Sen. Pat Toomey announced he’d retire at the end of this Congress, increasing its competitiveness and leading Democrats to hope they could pick it up.

Among the tightest contests:

While those five races may not be called yet, both parties cheered their victories in other U.S. Senate races following calls by The Associated Press that their candidates had won. The Senate is now evenly divided between Democrats and Republicans, with Vice President Kamala Harris casting deciding votes.

In Iowa, Republican U.S. Sen. Chuck Grassley, who was first elected to Congress in 1974 before becoming a senator in 1980, defeated Michael Franken, securing an eighth term in the Senate.

Since just one-third of U.S. Senate seats were up for reelection this year, 36 Democrats and 29 Republicans didn’t face voters Tuesday. And many of the senators up for reelection were in safe states, leaving voters in just a handful of races to determine control of the chamber.

Georgians could be the deciders

Depending on how the undetermined races shake out, control of the U.S. Senate may not be decided until December, if Georgia goes to a runoff election.

Two years ago, control of the U.S. Senate came down to Georgia, when its races went into runoffs before voters elected Sen. Jon Ossoff, the state’s first Jewish senator, and Sen. Raphael Warnock, its first Black senator.

Ossoff was elected to a full six-year term, but Warnock is facing voters again since 2018 was a special election triggered by former Georgia U.S. Sen. Johnny Isakson’s resignation.

Georgia and the other uncalled races were among the most competitive in the country.

The Cook Political Report with Amy Walter pegged the closest Senate races as Arizona, Georgia, Nevada and Pennsylvania, leaving all four of those contests in its “toss-up” category ahead of the elections.

In its final update Friday, Jessica Taylor, the Senate and governors editor, wrote that Republicans were entering “the final days of the midterms with the political winds at their backs and the slight momentum in the battle for Senate control.”

Taylor noted that Democrats’ best chance of holding onto their majority in that chamber was to keep the equally divided 50-50 Senate. The other option was that “Republicans could get to 52 seats, or 53 in a huge wave.”

“While Democrats saw momentum swing in their favor this summer on abortion following the Supreme Court’s Dobbs decision, the economy, inflation and crime are now driving a dour environment across the board,” Taylor wrote. “While Republicans are still beset by many weak nominees that have been bailed out on air by superPACs, it appears that the climate may end up winning out over candidate quality.”

The U.S. Justice Department announced Monday that it would monitor 64 jurisdictions across 24 states to make sure those polling locations complied with federal elections, as required by the Voting Rights Act.

But not all voting took place on Tuesday, with more than 45 million Americans voting early and 25 million of those voters opting to use mail-in ballots, according to the United States Election Project.

That means swing states have a significant number of mail ballots to count, a process that could take days before it’s complete. And in states where the results are especially close, it’s likely election workers will need to recount all the ballots to be sure of the winner.

Arizona has 1.5 million mail-in ballots to count, a significant number given how close the race between Kelly and Masters remained.

Georgia voters sent in 234,000 mail ballots that could end up playing a role in that extremely tight U.S. Senate contest.

In Nevada, election officials have 411,000 mail-in ballots to add to the totals.

Pennsylvania voters cast 1.2 million mail ballots with nearly 70% of those coming from Democrats, a factor that could help boost Fetterman against Oz.

President Joe Biden has been hopeful about Democrats’ chances of holding onto the U.S. Senate in the days leading up to the election, saying Monday night that he was “optimistic.”

“I think we’ll win the Senate, and I think the House is tougher,” Biden said on the South Lawn of the White House.

Biden spent much of his election night calling Democrats to congratulate them on winning their election. Senate Majority Leader Chuck Schumer, who easily won his reelection in blue New York state, Vermont Sen.-elect Peter Welch, Colorado’s Bennet and New Hampshire’s Hassan were among his calls.

If Republicans do regain control of the U.S. Senate, their relationship with the Biden administration is likely to change, though it’s not clear by how much.

Biden cautioned Friday that he’s prepared to reject any party-line bills a Republican-controlled Congress could send to his desk, should the GOP regain control.

“If we lose the House and Senate, it’s going to be a horrible two years,” Biden said at a Democratic finance reception at the Loews Chicago O’Hare Hotel. “The good news is I’ll have a veto pen.”

Senate Minority Leader Mitch McConnell, a Kentucky Republican, has shared very little about what a Republican U.S. Senate would do with the next two years.

McConnell opted not to release a campaign platform ahead of the elections, the way House Republicans did with their so-called Commitment to America, a one-page document that briefly outlined the types of bills the House GOP planned to bring to the floor if they regained control of that chamber.

McConnell largely rebuffed the campaign platform that National Republican Senatorial Committee Chair Rick Scott, a Florida Republican, released earlier this year, saying if “we’re fortunate enough to have the majority next year, I’ll be the majority leader. I’ll decide in consultation with my members what to put on the floor.”

McConnell and several other Senate Republicans also largely rejected the idea the party would bring up nationwide abortion legislation in September when South Carolina GOP Sen. Lindsey Graham released a 15-week national ban with exceptions after that gestational age for rape, incest, or the life of the pregnant patient.

“I think most of the members of my conference prefer that this be dealt with at the state level,” McConnell said on Sept. 13.

One of the first significant tests for Republicans, if they officially take over in January, will be to determine how they can work with the Biden administration to fund the government and raise the nation’s debt limit to avoid a default sometime next year.

The government funding deadline will likely hit on Sept. 30, 2023 when the federal fiscal year ends, though the debt limit might need congressional action before then if the Treasury Department reaches its $31.4 trillion borrowing limit.

Senate Republicans opted not to lend any votes to the first debt limit bill needed during the Biden administration, helping Democrats to get past the legislative filibuster, but not to actually pass the measure.

And key House Republicans, including Kevin McCarthy, a California Republican and likely the next speaker, have indicated they’ll use the debt limit as leverage to get spending cuts.

Aside from legislative debates, a Republican U.S. Senate would have a significant impact on the Biden administration’s executive and judicial nominations, which have largely sailed through that chamber under Democratic control.

Iowa’s Grassley, who is expected to resume his place as chairman of the Judiciary Committee, said in a statement that “under a Republican majority, nominees will receive more thorough scrutiny than they have for the last two years.”

“We’ll certainly stop being complacent rubber stamps for President Biden’s picks like Democrats have been, especially when the nominees are overtly political,” Grassley added.

McConnell became somewhat notorious in 2016 for holding up former President Barack Obama’s nomination of Merrick Garland — who is now attorney general — to the U.S. Supreme Court ahead of the presidential election.

The move led to then-President Donald Trump nominating three justices to the court, giving the one-term president’s nominees control of one-third of the bench.

With two years left in Biden’s first term, any future Supreme Court nominees would now be subject to approval, or blockade, if voters elect a Republican U.S. Senate.

Johnathan Abram claimed off waivers by the Green Bay Packers