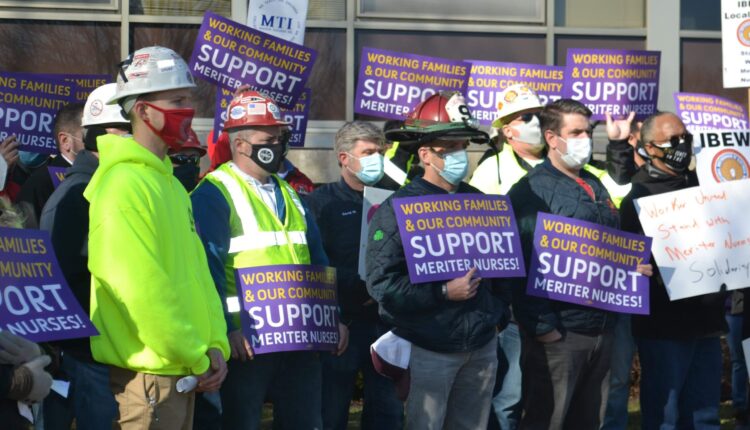 A half-dozen activists were wrapping up a 90-minute conversation Wednesday when Conner Erickson offered his tip to people trying to organize a union where they work.

“Frustration is an incredibly strong weapon that spreads rapidly,” said Erickson. “Reassuring folks that their frustrations are not theirs alone — that does a lot for a worker who’s insecure or unsure how they can make a difference.”

Erickson works at the Pabst Theater Group, which owns a group of entertainment venues in Milwaukee, and was active in the successful union organizing drive there earlier in 2022.

He was one of two involved in that drive, along with a collection of other workers campaigning for better conditions who took  part in a panel discussion Wednesday about the recent upsurge in union organizing in Wisconsin: What it’s like, why it’s happening now and what keeps them going.

The panel discussion, held over Zoom, was organized by COWS, the University of Wisconsin center that measures the economy from the perspective of workers. It followed the release last week of COWS’ latest State of Working Wisconsin report. The report’s key finding was that, for many reasons, Wisconsin workers have reached a turning point where they have discovered their potential power to improve the conditions of their jobs.

“It isn’t a time of retreat from work, it is a time of engagement and workers taking this moment to recognize the power they have,” said labor economist Laura Dresser, associate director of COWS and co-author of the report, as she set the stage for the discussion.

Wisconsin workers have expressed that power in many ways. “2022 saw a surge in official [union] organizing,” Dresser said. “But also, connected to the entire breadth of work, individually and collectively, formally and informally, workers are demanding more from work.”

The attention Wednesday was on collective action of union as well as non-union workers.

Victoria Gutierrez, a nurse at Meriter Hospital in Madison, said union representation was important to her ability to advocate for herself and for the people in her care. “I feel the only way I can really ensure my own safety or my patients’ safety and provide quality care is to have that union voice,” said Gutierrez, who is active in SEIU Healthcare Wisconsin, part of the Service Employees International Union.

That was especially evident, she said, in the first year of the COVID-19 pandemic, culminating in contract negotiations in March 2021, with issues that included time off and workers compensation coverage for employees who came down with COVID-19 as well adequate information about personal protective equipment available to them.

Mary Jorgensen, a nurse at UW Health involved in the three-year campaign to reinstate union representation at the health care system, agreed. “We’ve had deteriorating working conditions since we lost our contract in 2014,” Jorgensen said. “The pandemic just exacerbated all the problems that we did have.”

Housekeepers at a Madison chain hotel didn’t have a union and wanted to get the evaluations and raises they had been promised when they were hired. They turned to Worker Justice Wisconsin, a nonprofit supported by unions and faith groups that helps nonunion workers; the organization helped the group win better pay and other working condition improvements, said Delia, one of the housekeepers, who took part in the panel.

Ballard also interpreted for another woman, employed at a Madison sportswear and screen printing factory where workers complained of missed paychecks and overheated working conditions.

“I was already set on leaving,” the worker said. But after being connected with Worker Justice, she and her coworkers concluded that “these are our jobs and we don’t have to leave — we can defend them.”

After the workers petitioned the owner and were laid off, they filed an unfair labor practice charge with the National Labor Relations Board. Ballard said Wednesday that all the laid off workers were rehired following intervention by the agency.

Panelists said that younger generations of workers appear to be particularly enthusiastic in pressing for union representation and rights at work. Younger nurses have been among the most vocal in the UW Health union drive, said Jorgensen.

Troy Brewer, a cook at Fiserv Forum and union steward for Milwaukee Area Service and Hospitality Workers (MASH), reported similar experiences. When confronted with unacceptable situations at their work, “the young people, they are — ‘I’m not putting up with that, and there’s no way I’m doing it,’” he said.

Instead of leaving their jobs, “We have the opportunity now to work with those and create a culture in Milwaukee that cares about its entertainment workers.”

“This is a whole lot more than just our workplace or just the entertainment industry,” said James Stapleton, another Pabst Theater Group union activist.

It’s about “workers’ rights as a whole,” Stapleton said. “Every worker deserves a right to good wages, a good workplace and to have a voice in their workplace, because at the end of the day it’s the workers that make it all happen.”

New Weapons to Ukraine, as Europe and the US are preparing for a long-term conflict