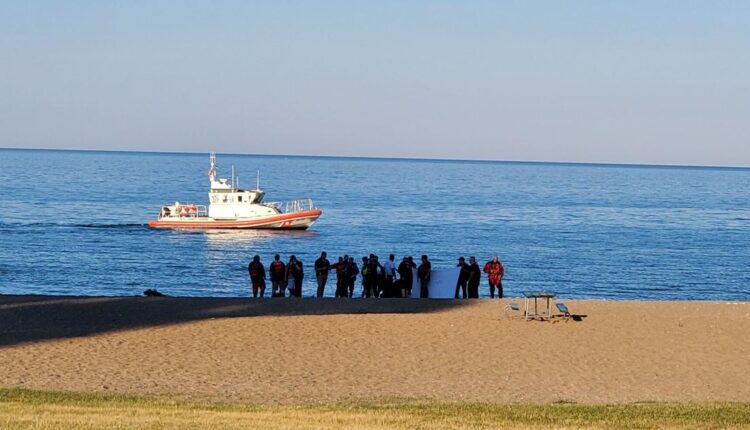 Emergency rescue and law enforcement pulled a child from Lake Michigan early Tuesday evening following a call that a boy was missing at Pennoyer Beach.

The incident occurred shortly after 6 pm A tweet from the Kenosha Police Department confirmed that authorities and the Kenosha County Dive Team were on scene for the rescue of the child saying only that the child was pulled from the water and transported to the hospital.

“This is an evolving investigation. KPD will have no further comments involving this incident (Tuesday) night,” according to the statement.

Emergency units, including a Fire Department ambulance and multiple police cruisers were at the scene along the Lake Michigan shore, directly behind the Pennoyer Park band shell where the Tuesday’s at the Shell outdoor concert continued into the early evening.

A US Coast Guard craft was near shore assisting with the search, as were emergency responders in an inflatable craft. About 45 minutes later, rescuers located a person in the water. Multiple personnel held sheets around the immediate scene at the shore shortly after beginning life-saving measures. Minutes later, the large group rushed the person to an waiting ambulance, which initially drove away without sounding its sirens.

Earlier, several people on the beach who had been at the band shell for the concert, said they had left the performance to help search for who they were told was a 5-year-old boy who had been reported missing. An announcement had been made during the concert alerting the audience to the missing boy.

Fire and rescue, they said, had also been called to the scene to assist in another water incident just moments earlier involving a young girl, possibly a few years older than the boy. It was known whether the two children were related to each other.

Elisa Rocha of Kenosha was among the concert-goers who went to the beach to help with the search.

“We were just listening to the music and one of the police officers made an announcement that there was a little 5-year-old boy named Solomon that was missing,” she said. Rocha said the officer included in the announcement that the boy was not wearing swim trunks and for the audience to be on the lookout for him.

“So, we just picked up our stuff and helped them look,” she said. Rocha said the authorities didn’t release any further information on the boy.

According to Rocha, other people on the beach noted that fire and rescue were already on the scene for a girl who was with the boy and reported to be in the water. According to emergency radio traffic the girl had been pulled from the water. Her condition was not known.

“The little boy ended up going missing in the meantime,” she said. “It’s just horrible.”

Garrett Devoe of Kenosha said he was also at the band shell to attend the concert but decided to go for a walk on the beach before it started.

“We’d seen everybody waving their arms before the police arrived,” he said. “There was a couple here, a man with his daughter holding her and saying there was a boy missing.”

The man told Devoe that they had found the boy’s shorts. He said the man and his daughter, who Devoe said was about 8 years of age, were crying. Rescue personnel then descended upon the beach and into the lake to search for him. He said following the police announcement at the concert “everybody started searching” for the boy.

This story continues to develop. Check back for additional details.

Of which L. Price

Madison LeCroy’s Shade Toward Olivia Flowers ‘Could Have Been Worse’

Milwaukee knocks around Twins for 6-3 victory at Target Field