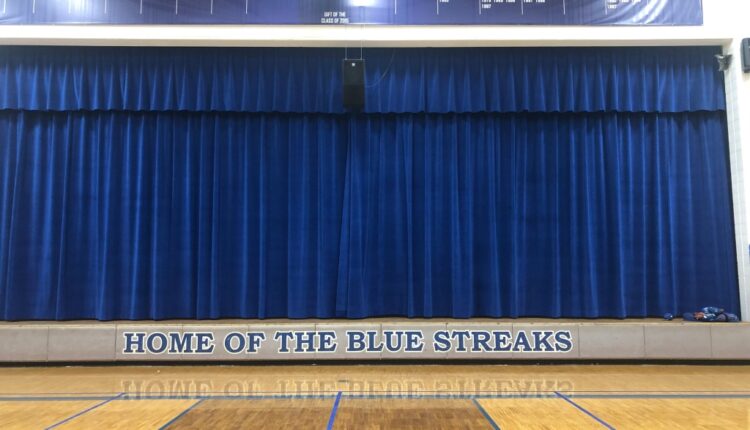 At a lot of schools, you could probably get some good ideas from administrators, teachers and students on how their particular buildings could be improved.

While coming up with these “wish lists” is easy, finding ways to pay for building enhancements is often much more difficult.

These days, it seems many school district budgets are squeezed tighter by the financial realities of rising costs and reductions in state funding. And if school districts can’t get voters to approve levies that will generate additional tax revenue, some building improvements that would be nice — but aren’t critically needed — might end up not getting done.

Sometimes though, budgetary constraints can’t diminish the energy and enthusiasm of residents who want to pursue different ways of funding building-enhancement projects. If you want an example, consider the steps that were taken by a volunteer committee to acquire much-needed new stage curtains at Madison High School.

The group raised about $33,230 to purchase new curtains for the stage at the Madison High School gymnasium.

Known as the Stage Curtain Fundraising Team, this panel was formally recognized for its efforts in a resolution approved by the Madison School Board.

Team members appeared at the Sept. 6 school board meeting, which was held in the gym of Madison High School in Madison Township to showcase the new blue stage curtains.

“That’s why we wanted to be here tonight,” said Madison Schools Superintendent Angela Smith. “Because those curtains look absolutely gorgeous. I just want to thank the curtain committee. You should all be very proud.”

The Madison Bingo Boosters also were honored in the proclamation for contributing about half of the original fundraising goal of $30,000. Booster representatives who were on hand for the Sept. 6 presentation were President Brad Pitzer; Joann Eckert; Marge Hanlon Kurilec; and Bonnie Rohrbaugh.

Jo Hudson, who launched the fundraising drive late last year, said in a Dec. 21 Facebook post that the old curtains on the Madison High School stage had become “ripped, faded and badly worn.”

“And that does not even include the fact that the mechanism that moves them back and forth is not working properly,” she wrote.

During a Sept. 7 interview with The News-Herald, Hudson noted that there had been a lot of talk over the years about replacing the curtains, but no action was ever taken.

She said she decided to personally spearhead a fundraising campaign for new curtains after seeing what happened during a concert on the Madison High School stage in early December.

“The choir director stumbled after getting caught in the shreds (of the curtains) and then later, a student got tangled up in them,” Hudson said.

After the concert, Hudson talked to some people she thought might want to help with a fundraising campaign.

“The next day I spoke with the superintendent and she told me to go for it,” Hudson said.

During the Sept. 6 school board meeting, Smith said, “Jo took the bull by the horns and got it done with her committee.”

Hudson said the money to buy new curtains and rigging was collected in various ways.

The committee sold tickets for a “booze wagon” containing $1,000 worth of bottled liquor, while the nonprofit group Asa’s Angels conducted a 50/50 raffle earmarking helped of the proceeds for the new stage curtains.

“An industry in Mentor who employs a lot of Madison folks also sent in a big check (separately),” Hudson said.

In addition, Hudson is self-employed as a seamstress, and the near the end of the 2021-22 school year, she donated all fees from high school prom gown alterations to the stage curtain project.

Members of the panel sat outside every event at Madison High School for four months and gathered donations.

The News-Herald commends all seven members of the fundraising team for their hard work and success on this project. They truly deserve a standing ovation from the Madison community.