Voters reject Madison Cawthorn in primary: `Too immature and uncultured’ 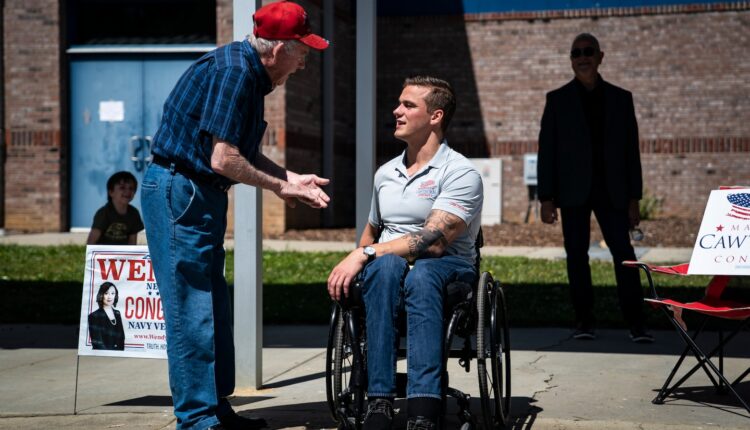 As Republican voters in the Blue Ridge Mountains explained why they didn’t choose Rep. Madison Cawthorn (RN.C.) in Tuesday’s primary, one nagging thing was on their minds.

“He’s proven himself to be too immature to handle the job,” said Mike Eberhardt, a 78-year-old retired wildlife biologist and registered Republican who voted for Cawthorn when he first ran in 2020. “He doesn’t show up for votes in Congress. He just speeds around the country.”

“I don’t know the kid, but he’s a kid, and that may be what the problem is,” said Joey Reece, 66, a retired Drug Enforcement Administration agent and registered Republican who voted for Donald Trump twice. “You’ve got to earn a second chance.”

Soon after the polls closed on Tuesday night in North Carolina’s 11th District, it became clear the 26-year-old would lose after serving one term.

Before the race was officially called by the Associated Press, Cawthorn contacted state Sen. Chuck Edwards to concede, surprising several House GOP aides who assumed the fiery freshman would take his cue from former president Donald Trump and declare the election was stolen from him. Especially because it was a close contest: Edwards edged Cawthorn by roughly two percentage points with nearly all the votes in.

Sen. Thom Tillis (RN.C.), who endorsed Edwards after growing tired of Cawthorn’s antics, said the freshman’s gracious acceptance of his loss was “a great first step” to regain trust in GOP circles.

The listless mood was reflected Tuesday night at Cawthorn’s campaign headquarters, where the crowd was small and subdued. Cawthorn emerged two hours after the polls closed, showing Edwards in the lead. The Republican was characteristically defiant, telling supporters he would be victorious amid a “very close” race.

Just minutes later, the campaign began to tell the media that Cawthorn had called Edwards to concede.

“Congratulations to @ChuckEdwards4NC on securing the nomination tonight,” Cawthorn wrote on Twitter shortly before midnight. “It’s time for the NC-11 GOP to rally behind the Republican ticket to defeat the Democrats’ nominee this November.”

It was a moment of triumph not just for Edwards but also for a cast of prominent North Carolina Republicans who have been working behind the scenes to Oust Cawthorn.

Who is Chuck Edwards, the man who defeated Rep. Madison Cawthorn?

And it was a moment of defeat for Trump after he re-upped his endorsement of Cawthorn over the weekend, asking voters to “give Madison a second chance” following his “foolish mistakes.” But instead voters made the freshman the second US House incumbent to lose in this tumultuous election cycle and put a black mark on Trump’s endorsement record.

“Technically this is the sixth or seventh chance,” Tillis said Tuesday in response. Cawthorn “hasn’t learned from a mistake he’s made over the last year … At a certain point, this becomes a pattern of behavior.”

Voters also were not persuaded by the former president’s pitch.

That may be because Cawthorn has invited controversy after controversy since being sworn in 16 months ago as one of the youngest members of the US House. The freshman has been accused of insider trading by colleagues, which he has denied, and has been accused of approaching a TSA airport checkpoint twice with a gun, which he recently acknowledged was a “flat out mistake.” He has also driven with a revoked license, a matter that his spokesman said would be resolved quickly.” Cawthorn also broke House rules late last year, an issue on which he declined to comment. The incidents, many of them repeated, left Republicans wondering when the incumbent would learn to take responsibility for his actions.

Tillis and other GOP elected officials in the state charged that the Make America Great Again champion wasn’t paying attention to constituent needs or legislation.

Voters, it seems, had the same concerns.

“He’s too immature and uncultured to really represent this district,” added Watson, a retired attorney and Army colonel. “This is not an easy district. We’ve got a lot of needs here, and we have a lot of people that want to talk to you as a congressman. I just thought that he didn’t give it the attention that we needed.”

Returns in the 11th District showed a familiar pattern for MAGA-style lawmakers: Cawthorn did better in precincts with a smaller concentration of voters with college degrees. In the average precinct in which women made up a minority of voters, Cawthorn received 58 percent of the vote. In contrast, in those precincts in which women made up at least 56 percent of the voters, he received an average of 39 percent, according to The Washington Post’s analysis of returns.

Yet a decision to first run in a different district drawn more favorably to Republicans in redistricting before refiling to run in the 11th may also have contributed to the congressman’s loss.

Numerous Republicans jumped into what appeared to be an open-seat race for the 11th District, including Cawthorn’s district chair and handpicked successor. After courts threw out that map, however, Cawthorn changed his mind and decided to run in the now-GOP-friendly 11th, prompting many voters to question him and creating a stir among local GOPers.

The incumbent also ended up in an eight-way race for the redrawn seat. Strong opposition from North Carolina Republicans was critical as they grew angry with Cawthorn’s repeated antics and pointed criticism, especially of Tillis, who he slammed as too moderate at a party gathering. That prompted Tillis’s wife to weigh in about Cawthorn’s move to switch districts.

Inside the Republican campaign to take down Madison Cawthorn

Cawthorn has blamed everyone but himself for his troubles, including “establishment RINOs,” referring to Republicans In Name Only, and left-wing activists for a “coordinated drip campaign” to leak his troubles to the media. Cawthorn called the claims “baseless” and accused those who drew the maps of using their office for political gain, which he’s “sick and tired of.”

“There’s been a coordinated strike carried out by really, kind of the old establishment wing of our party, and it’s something that I think is a loser’s mentality,” Cawthorn said at his campaign headquarters moments before he conceded. “If they want to be able to pay off people from my past to try and bring up old pictures or things that happened years and years ago, I feel free to let them do that. I think the American people will see through that.”

Cody Hansen, 18, was bothered by Cawthorn bringing firearms through TSA checkpoints but saw past other controversies, casting his first ballot ever for Cawthorn.

“I think when he said that he was the first politician to grow up with the cellphone, it’s very accurate,” he said. “I understand what it’s like to be young and dumb, and I think having the capability to see someone grow through the stupid phase of their life is really going to change politics in the future.”

The NC Board of Elections announced historic early turnout numbers, with roughly 580,000 voters casting their ballots before Tuesday. North Carolinians have an option not available in all states — to register as an unaffiliated voter and choose which primary to vote in. Sixty-two percent of them did so in the Republican primary.

Recently the ranks of the unaffiliated have grown to become the largest group of voters, ahead of Democrats and Republicans, threatening Cawthorn’s chances.

Melissa Dowling Johnson, a left-leaning independent, is one of them.

“We get a lot of transplants,” Johnson, 56, said. “People move to this area, and they come in as a Democrat, and after they’ve lived here a little bit they realize you don’t really have a voice in local elections if you are a Democrat.”

The Hendersonville hairstylist has been unaffiliated since 2020, long before a PAC dedicated to Cawthorn’s ouster, American Muckrakers Inc., implored Democrats to re-register as unaffiliated so they could choose a Republican ballot and vote against Cawthorn in the primary. She voted for Wendy Nevarez, who earned the endorsement from American Muckrakers.

“Actually, several of my clients switched their affiliation,” Johnson said. “We just didn’t feel like he could be a voice for anybody.”

Mike DeBonis and Lenny Bronner contributed to this report.

UW-EXTENSION: Some first aid for your mental health |