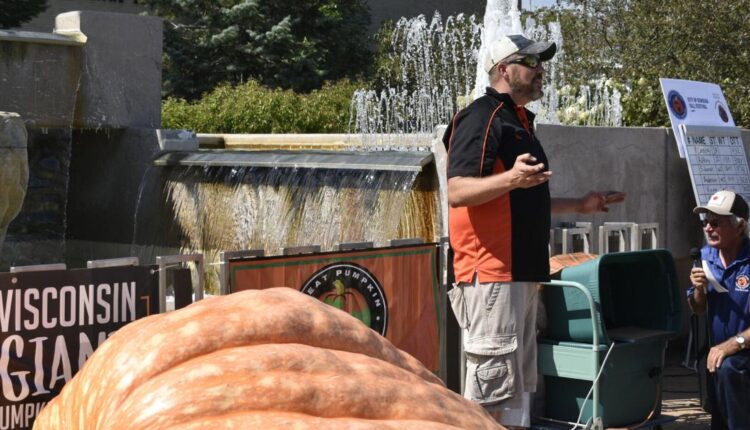 There was plenty to see and experience Saturday at Kenosha’s lakefront, from Lego streetcars to giant pumpkins and other fall fun.

“Everybody’s got a little different interest,” said Bradley Preston, chairman of the Kenosha Streetcar Society. “Some of the guys want to talk about the maintenance album (and) the history of how they got here.”

The streetcar event started when a group of people approached Preston about touring the facility.

“We basically had a couple of dozen people who wanted to come and I said, ‘Well, why don’t you all come on this particular Saturday,'” Preston said. “Then one of the business groups got involved and I thought we ought to make it something bigger.”

“Some people just want to get in there and see the Lego display, which is just fabulous,” Preston said. “They’ve been here almost every year we’ve done this open house here.”

Since then, numerous people have come to see the trolleys and Legos, which were added roughly seven years ago.

“We store it built in our basements and we bring it out to shows,” said John Wolfe, a member of the Kenosha Lego Users Group. “We set up in just an hour.”

Wolfe, along with other group members, said the enjoyment of Legos, especially by viewers of their work, is multi-generational.

The Kenosha Fall Fest, which has been held for 10 years, has featured a pumpkin weigh-off, run by the Wisconsin Giant Pumpkin Growers Association, for the last six years. Jim Ford, president of the association, thought of the idea after noticing the park while working on a job in a nearby building.

“I looked at this area and I’m like, ‘This is a good place,'” Ford said. “So I went up to the mayor’s office, I pitched my idea, and obviously they bought it. They had their fall festival going, so we piggyback off of that.”

Ford is a seasoned giant pumpkin grower, as he’s been growing them for 20 years. He said the camaraderie and the competitive nature of the contest draws growers to enter and compete.

“I believe it helps to have a personality disorder to grow these things,” Ford said.

Although many competitors have been growing large pumpkins for years, some attended the event as first-time growers.

Ian Anderson, of Sauk City, said he started growing his pumpkin in April because he was bored. He has grown other plants and vegetables, such as tomatoes and basil, but had never grown a giant pumpkin before.

“It’s like a full-time job,” Anderson said. “If you forget about it for like two days, it’s a five day catch up.”

Jaxson Morehouse, the youngest competitor at age 12, was competing for the second year in a row. Morehouse was given seeds by Ford, and started growing his pumpkin in May.

“I went over to his house and he showed me his patch,” Morehouse said. “And so he gave me a couple of seeds and I started growing.”

To weigh each pumpkin, a forklift hath to lift each from a palette they are resting on, and carry them to the scale in front of the fountain. In that process, the bottom of the pumpkin is examined for holes or signs of rotting, as either factor could disqualify it from competition.

There was also a squash entered to be weighed in the competition. For a squash to qualify, it must not be red or orange in color.

Winner of the top prize will take home $1,500 and a plaque. Ribbons and prize money also will be awarded to runners-up.

“It’s a lot of work more work than you think,” Ford said. “To get a giant pumpkin (to weight) 500 pounds with the right seeds (and) with the right genetics is relatively easy, but to get him over 1,500 pounds or 2,000 pounds, he needs to be baby every day.”

Final results of the competition were not available by press time Saturday.

A participant in the Timberworks Lumberjack Show saws a log in Petrifying Springs Park.

A participant in the Timberworks Lumberjack Show competes to see how quickly he can cut through a log with an ax.

A participant in the Timberworks Lumberjack Show competes in speed pole climbing.

Two participants in the Timberworks Lumberjack Show try to keep their balance while forcing their opponent to fall into the water at Petrifying Springs Park.

Two participants in the Timberworks Lumberjack Show try to keep their balance while forcing their opponent to fall into the water at Petrifying Springs Park.