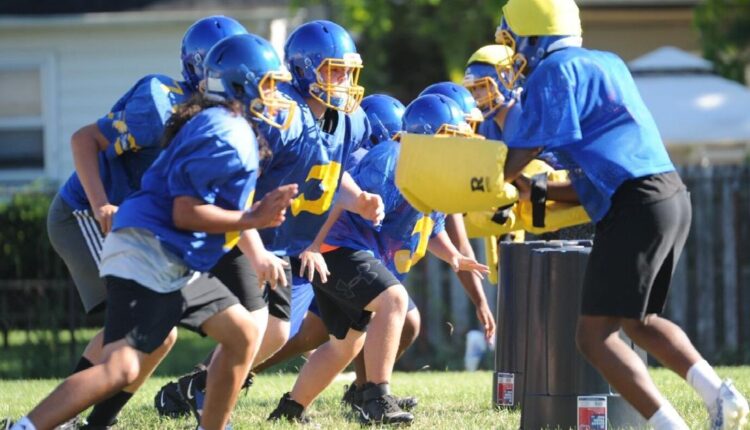 KENOSHA — Tight ends are much more valuable than most people consider in high school football.

The player lines up on the line of scrimmage alongside his offensive line, so he must be able to block 250-to-300-pound beasts.

Then, when it’s time to pass, the tight end is usually tall and uses his sheer height and athleticism to out-run smaller defenders, jockey for position and even overpower defensive backs on 50-50 jump balls.

On running plays, a good tight end combined with a pulling guard or tackle and a blocking fullback can spring next-level burner running backs to 70-yard touchdown runs.

This is all in a day’s work for St. Joseph senior tight end Luke Schuler.

From a pure observational standpoint, Schuler looks like he was carved from granite as he wolfs down some quick swigs of his Gatorade water bottle last Thursday at the St. Joseph’s practice field behind the high school.

He’s got the look, the size, the speed and the credentials to continue the Lancers’ journey to a state championship game—one that started last year with a 12-1 record but a somewhat disappointing, abrupt end in Level 3 of the playoffs.

“My expectations for this season are to be better than last season and play for a state title,” said Schuler, a two-way all-Southeast Conference pick (TE/OLB) and all-state tight end who has received Division 1 college football interest. “Since I was a freshman, our record got better and better every year, and I don’t plan on that changing.”

“I started putting more work in on my own. Put all my trust in my coaches to get me where I needed to be and get me ready for this season. Most of this team witnessed our team last year succeed on and off the field. All the underclassmen watched and learned from the great group we had last year. They put in the work and are motivated to be great every day. That’s the best feeling to have when you’re a senior going into your final year of high school.”

The undefeated Lancers flew along all year before meeting their match in a 29-6 playoff loss to St. Mary’s Springs.

The Lancers return six starters on offense and six on defense, so there’s no reason they can’t taste dominance once again.

“It’s a good group of kids to coach,” Rizzo said Saturday. “They love being coached and work hard.”

“We have high expectations for this group. We lost many key players, but we have a great group coming back. We have great team leaders, and this group is looking forward to competing for another conference championship. We have the makeup to compete and win the conference again. Replacing our QB, WR and DBs will be a priority. So, some younger guys that do not have extensive experience in those key areas will need to get the job done. But, we believe we have the guys to do it.”

Sure, there’s inexperience, but the Lancers are the Wissports.net favorite to repeat as Midwest Classic Conference champions, ahead of Racine Lutheran and Kenosha Christian Life.

“We competed against a good Thomas More team and we stayed healthy,” Rizzo said. “Two things we always want to see and take away from a scrimmage. We saw some young guys play some group reps where we are thin and experienced, so that was good as well.”

“We have some positions in the secondary that we will have to figure out, but we will get there.”

A school with an enrollment of 220 students would ideally have to struggle for numbers, but there are 44 Lancer football players this season along with 18 returning letter-winners.

Along with Schuler leading the way, junior quarterback/defensive back Eric Kenesie, senior lineman Marco Matteucci, senior outside linebacker Peter Stapleton, junior running back Jayden Gordon and senior lineman Tyson Jones (6-3, 280) are expected to run this thing back in 2022.

“I think I can speak for all the players and coaches when I say expectations for this season are really high,” he said. “After seeing what we had accomplished last year and with the return and come-up of many great athletes, I believe we can accomplish just as much and even more this year.”

Matteucci spent the offseason working out in the gym, and focusing on the camaraderie with the new guys, welcoming them into the Lancer family.

It takes all 11 players doing the right thing at the right time together come Friday nights, and that chemistry starts months before the Aug. 19 season opener at Shoreland Lutheran.

“The brotherhood of this team is what really makes it something special,” Matteucci added. “Coach Rizzo always preaches the concept of family, after being a part of this program four years I can say that the bonds that I have made are definitely bonds that will last a lifetime.”

With the team’s leading passer (Jacob Aushmus, 1,471 yards) and receiver (Andrew Alia, 521 yards) graduated, more emphasis will be placed on Gordon, who led the team with 903 yards rushing and 14 touchdowns last season.

Kenesie and Schuler should provide a formidable 1-2 punch in the passing.

The first-year signal caller says he expects the squad to go undefeated and go deep in the playoffs.

Kenesie added he’s worked with his receivers often on their own, aside from practice. He’s building a tight bond and hoping it will translate over to Friday nights and Saturday afternoons.

“We have a special team because everyone wants to work, from freshmen to seniors,” Kenesie said Saturday. “Every chance we get to get extra work in, everyone does their best to get the work in.”

“I think that’s what makes us so special.”