What to do in Madison this week: Shifting Gears, LaborFest and more Isthmus Picks – Isthmus 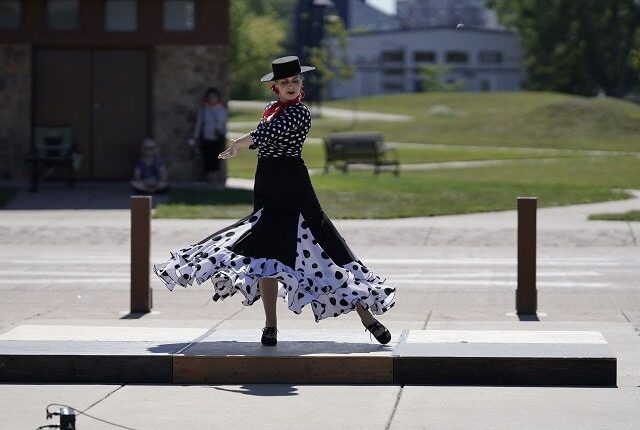 shifting gearsMonday, Sept. 5, along city bike paths, noon-6 pm: Coordinated by the Isthmus Dance Collective, Shifting Gears Bike Path Dance Festival features more than 15 arts groups and individuals demonstrating varied movement arts at four locations around Madison: Wirth Court Park, McPike Park, Olin Park (at “the vantage”) and Brittingham Park. Along with performances, dancers will give a bit of history behind the art and lead audiences in some movements, and there will be kids’ activities at each park as Well. Find more info on the performers at isthmusdancecollective.org.

LaborFest, Monday, Sept. 5, Madison Labor Temple, noon-5:30 pm: The South Central Federation of Labor hosts this annual Labor Day event (returning for the first time since 2019) to mark the federal holiday honoring the workers of America, and celebrate the recent achievements of trade unions and other organizations working to safeguard worker rights. It’s a great opportunity to relax and enjoy some food and entertainment, this year featuring blues and roots music by the Chris O’Leary Band and an instant dance party with VO5. Admission is free, but bring gift cards to donate for the SCFL’s Community Services Committee collection for homeless students.

Enigma: The Prints of David Lynch, Sept 6-Oct 28, Tandem Press: This is an exciting two-fer both for die-hard David Lynch fans and anyone who has not yet experienced The Lady in the Radiator. Along with mounting a gallery exhibition of his prints, Tandem Press will present an outdoor screening of the documentary David Lynch: The Art Life as part of the Sept. 23 exhibit reception (5-8:30 pm). Lynch began his career by making eerie and surreal black and white works like The Grandmother and the classic Eraserhead before going mainstream (relatively speaking) with movies like Blue Velvet and Mullholland Drive. His prints reflect some of the summer symbolism from his early films. In the documentary David Lynch: The Art Life he reflects on his film career and discusses his artistic practice.

National GeographicLive, Tuesday, Sept. 6, Overture Center-Capitol Theater, 7:30 pm: The great tradition of National Geographic as a doorway to the rest of the world takes a turn, heading deep into the past with this presentation from Dr. Beth Shapiro on “How to Clone a Mammoth.” If you have even the vaguest acquaintance with modern movies it should be clear that cloning anything that’s extinct is maybe not such a good idea. But Shapiro, who wrote the book How to Clone a Mammoth: The Science of De-Extinction, explores technical, ethical and ecological challenges to bringing extinct species back to life. So it’s not exactly a DIY night. Thank goodness. Shapiro will be answering questions after the presentation. Tickets are available at overture.org.

Questioning Things: A Quarter Century of Material Culture Studies at UW-Madison, Aug. 24-Nov. 20, UW Nancy Nicholas Hall-Ruth Davis Design Gallery: Questioning Things focuses on the study of material culture; that is, the study of the objects of the past, from teapots to chairs to shoes. The “conversational” exhibit is dotted with the kinds of questions that those who study material culture ask, with a nod to the UW’s quarter century of scholars in the field, and visitors are prompted to consider their own answers.

Token Creek Chamber Music Festival, Sept. 4-11, Festival Barn, DeForest: The 33rd edition of the Token Creek Chamber Music Festival is titled “Twilight Etchings,” an introspective title that composer and co-artistic director John Harbison says reflects his interest in light and shadow as well as a nod to the last strains of the festival. That’s particularly relevant as this will be the final fest in its current incarnation as a fall event series, with shows taking place at 4 pm on Sept. 4 and 10-11 and 7:30 pm on Sept. 7. Find ticket and program information at tokencreekfestival.org and read more in Sandy Tabachnick’s season preview at isthmus.com.

Countering Christian Nationalism, Thursday, Sept. 8, Bethel Lutheran Church, 7 pm: Bethel’s forward-looking speaker series welcomes national investigative reporter Katherine Stewart, whose latest book, The Power Worshippers: Inside the Dangerous Rise of Religious Nationalism, is a deep dive into the pseudo- religious Christian nationalist movement in the US and its graves for power. We have all witnessed its growth; Stewart links it to past movements against abolition, the New Deal, and civil rights. Free tickets on Eventbrite.

The Wanderers, Sept. 8-25, Overture Center: Forward Theater starts its season with the Wisconsin premiere of Anna Ziegler’s The Wanderers, an interesting meditation on love and the road(s) not taken. Ziegler contrasts the arranged marriage of a young Orthodox Jewish couple with the flirtation of Abe and Julia, celebrities married to other people. Performances are at 7:30 pm Wednesdays-Saturdays and 2 pm Sundays, plus 2 pm on Sept. 17 and 24; Find tickets at overture.org. Forward will also offer tickets to an on-demand streaming version of the show.

Kathy Mattea + Suzy Bogguss, Thursday, Sept. 8, Stoughton Opera House, 7:30 pm: A winner of Grammy and Country Music Association awards, Kathy Mattea is a modern country music pioneer who has not only attracted Nashville’s best pickers to her projects but also collaborated with superstars such as Dolly Parton and Jackson Browne. Her latest album, Pretty Bird, was produced by Tim O’Brien. The collection shows her range based on the covers alone, including songs by Joan Osborne and The Wood Brothers. This is a power bill with Suzy Bogguss, also a Grammy and CMA winner. Bogguss put out a new album of Merle Haggard songs because, as she said, “I’ve been watching boys cover his music for so long. Why couldn’t a girl do this?” Mattea and Bogguss performing together will be over the top. Sold out.

PUP, Thursday, Sept. 8, The Sylvee, 8 pm: PUP plays straightforward noisy pop punk, with a sense of humor — his latest album is called The Unraveling of PUPTHEBAND. Songs can meander without obvious hooks, but the music is never less than passionate. With Palehound, The OBGMS. Read Stephen Coss’ concert preview here.

We hope it’s handy for you to find Picks grouped together in a single post. The individual Picks can still be found in the usual places online: collected here, and sprinkled throughout all the events.

Note: Many venues and businesses may continue to maintain individual requirements for masking, as well as proof of COVID-19 vaccination and/or a negative test for entry. Before heading out for any in-person event, confirm it is still taking place and check for any attendance guidelines on the relevant business websites or social media accounts.