What will Wisconsin Republicans do after Spindell spilled the beans on suppressing Black votes? 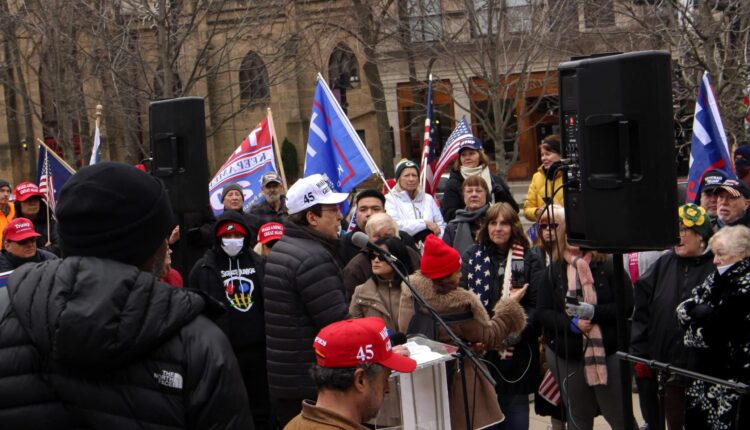 Thanks to the excellent reporting of Bruce Murphy in Urban Milwaukee, we now know that fake Trump elector and Wisconsin Elections Commissioner Robert Spindell crowed about Republicans’ successful efforts to suppress the Black vote in Milwaukee in the November 2022 elections.

The quotes Murphy pulls out of Spindell’s congratulatory message to Republicans, as party chair of the 4th Congressional District, are stunning.

To his fellow Republicans, Spindell writes, “we can be especially proud of the City of Milwaukee (80.2% Dem Vote) casting 37,000 less votes than cast in the 2018 election with the major reduction happening in the overwhelming Black and Hispanic areas.”

That was no accident, Spindell explains. Rather, it was “due to a multi-faceted plan” that included negative ads on Black radio stations and “A substantial & very effective Republican Coordinated Election Integrity program resulting with lots of Republican paid Election Judges & trained Observers & extremely significant continued Court Litigation.”

In other words, Republican efforts to protect “election integrity” are really just a cover for the real goal — winning elections by making it harder for Black and brown people to vote.

Not since a GOP staffer spilled the beans about Wisconsin Senate Republicans getting “giddy” over the state’s strict voter ID law, because it would help them win elections by making it harder for young people and people of color to vote, has anyone ripped the hood off the Republican Party of Wisconsin so dramatically.

Just as in the Jim Crow era, when racist politicians employed poll taxes and literacy tests to keep newly freed enslaved people from exercising the most fundamental right of citizenship, Spindell and his allies are seeking to disenfranchise people based on their race.

Black Leaders Organizing for Communities (BLOC), a Milwaukee-based advocacy group whose mission is to empower Black leaders “to organize and guarantee that their issues, concerns, and values are represented at all levels of government,” released a statement responding to Spindell’s remarks saying group was “disappointed but not surprised.” Spindell merely “said the quiet part out loud,” BLOC stated.

“Election after election, we are left as a Black organization to have to explain why Black turnout decreases in some areas,” BLOC’s statement continued. “Many of us have been sounding the alarm about how sinister voter suppression tactics have become, and Spindell’s comments reinforce what we already knew.”

Stll, it’s particularly egregious coming from an elections commissioner, BLOC points out — adding, in case there were any doubt, “It is incredibly racist to brag about lowering Black and Brown turnout.”

Nor is this Spindell’s first blatant effort to subvert democracy. In 2020 he was one of a group of 10 fake electors in Wisconsin who, knowing President Joe Biden had won, cast fraudulent electoral ballots for Donald Trump.

BLOC and other citizens’ groups are calling for Senate Majority Leader Devin LeMahieu to rescind Spindell’s appointment to the elections commission. That should be a no-brainer. As Matt Rothschild of the Wisconsin Democracy Campaign puts it, “I don’t know what’s worse: Engaging in voter suppression or boasting about it,” adding, “why this man still gets to sit on the Wisconsin Elections Commission is beyond me.”

Republicans need to do more than get rid of Spindell. They need to turn away from their whole, decades-long strategy of trying to win elections by preventing people of color from participating. They must reject the whole “Republican Coordinated Election Integrity program” Spindell laid out, making its true intentions clear.

That program includes stirring up paranoid conspiracy theories about nonexistent voter fraud, which Examiner reporter Henry Redman writes about today in his story on Racine as the center of the election denial universe. But it’s not just the Stop the Steal maniacs who are part of the program. As Redman reports, the powerful Wisconsin Institute for Law & Liberty filed a complaint against Racine in circuit court for its use of a “mobile voting van” which allowed people to cast early votes at the van rather than going into the clerk’s office or other pre-determined site. Launching meritless challenges at beleaguered clerks and filing lawsuits targeting innocuous absentee voting practices, even trying to block disabled voters from getting help when they can’t physically return their own ballots, are all part of the playbook.

In a Facebook post that made national news back in 2016, Todd Allbaugh recalled how, in 2011, when he was an aide to moderate Republican state Sen. Dale Schultz, he sat in the closed Senate Republican Caucus session on voter ID. “A handful of the GOP senators were giddy about the ramifications and literally singled out the prospects of suppressing minority and college voters,” Allbaugh wrote. “Think about that for a minute. Elected officials planning and happy to help deny a fellow American’s constitutional right to vote in order to increase their own chances to hang onto power.”

Allbaugh was so disgusted he quit politics and opened a coffee shop.

Packers’ 2023 opponents have as many questions as Green Bay does

Bleeding and in Pain, a Pregnant Woman in Louisiana Couldn’t Get Answers