Why hasn’t Keston Hiura been in the Milwaukee Brewers lineup more? 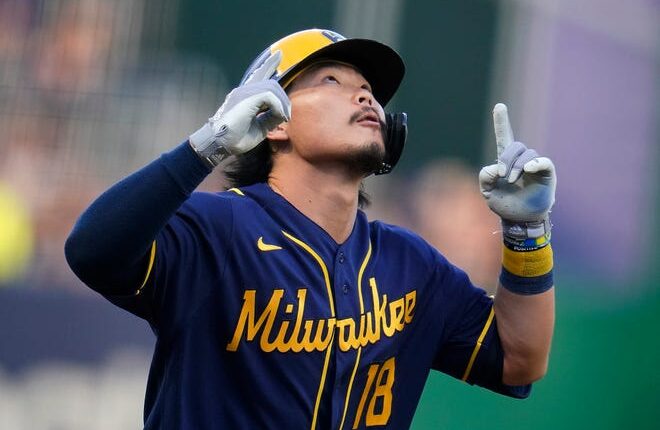 It’s a question you have probably wondered aloud in recent weeks, and rightly so. He leads the Milwaukee Brewers in OPS, has performed excellently against right-handed pitching in his career and seems to produce every time his name is penciled into the lineup.

That pencil just doesn’t scribble his name all that often. He was starting and batting fifth Wednesday night but prior to that had just 12 trips to the plate since being recalled from the minor leagues on August 3. Hiura’s 154 plate appearances in 2022 were tied for 12th most on the Brewers.

A combination of the way Milwaukee’s roster is constructed, Hiura’s defensive limitations and his reverse splits – he struggles against lefties while mashing rights – have made getting him in the lineup a tough task at times.

“We’re gonna try to put the team to try to win the game every night, that’s the best way to say it,” Brewers manager Craig Counsell said of Hiura’s sporadic playing time. “I don’t feel like we’re in a spot right now where we’re trying to get somebody at-bats. We’re trying to put a team out there and help us win games.”

Wouldn’t Hiura’s numbers, particularly his .296/.405/.662 slash line against rights this year and .258/.338/.524 for his career, suggest that Hiura’s presence in the lineup would give the Brewers a solid chance to win games?

“I think there’s a case for that,” Counsell said.

One theory for Hiura’s lack of playing time is that there is too much swing and miss in his game and a strikeout rate of 43.6% makes this level of production unsustainable. Counsell, however, shot that down Wednesday afternoon.

“Not necessarily,” Counsell said. “I think the overall offensive picture plays into it.”

Because of Hiura’s reverse splits and the team’s hesitancy to play him at second base, the most direct decision Counsell has to make in regards to playing time boils down to Hiura or Andrew McCutchen at designated hitter. Considering McCutchen is second on the team in plate appearances and most of those come batting either third or fourth in the lineup, you can read between the lines on which player the Brewers prefer on a regular basis.

Hiura, to his credit, has embraced his part-time role since the outset of the season. It was a fate he accepted after hitting just .168 with a .557 OPS during a tumultuous 2021 campaign.

“Going into spring training, given last year’s performance, my goal was to break with the team,” Hiura said. “I know our roster and what it is built up of. Understanding that from the get-go helped me be prepared for anything and everything, whether it was coming off the bench or starting or whatever. It was just being able to be ready for those opportunities at any time.”

This season has been all about adjustments for Hiura. He entered spring training having eliminated his pre-swing toe tap that he had used since high school. Next, during the season, he significantly reduced his leg kick. Most recently, in early July, he closed off his stance more.

“The whole point of toning all that down is to simplify things and I think that’s where I’m at,” Hiura said. “I’ve simplified a lot of things and made things easier to accomplish without doing too much. With the toe tap, leg kick, there’s a lot going on. Pitchers throwing harder with more movement, messing with timing, that led to simplifying all that.”

The difference in Hiura’s pre-swing mechanics are glaring.

Hiura’s most recent adjustment – ​​closing off his front shoulder more toward the pitcher – was something he considered last year but decided against in the end, thinking that between a toe tap, leg kick and closed stance too much would be going on. Now that it’s been implemented, Hiura feels like he is able to keep his front shoulder from flying open on the swing much better.

“Closing up my stance kind of helps me cheat to staying close, forcing myself to use my strength of the field which is that right field, right-center area,” Hiura said.

It would be understandable for frustration to mount as production isn’t met with more opportunity, but to Hiura’s credit, he remains upbeat in his current role.

“Keeping your feet where you are. Being present in the moment regardless of the situation,” Hiura said. “A big thing I’ve been focusing on at the plate is being present for every single pitch. Obviously it doesn’t only apply to hitting. It applies to being here in general.

“We have a good group of guys and you enjoy spending the day with them every single day. Being present, being able to be the best teammate you can be, controlling your attitude and effort is all you can control. Just going out there and focusing on doing those things day in, day out.”

Man to walk from Green Bay to Cudahy to raise awareness for addiction, recovery