Wisconsin GOP chair wants to have it both ways on Trump 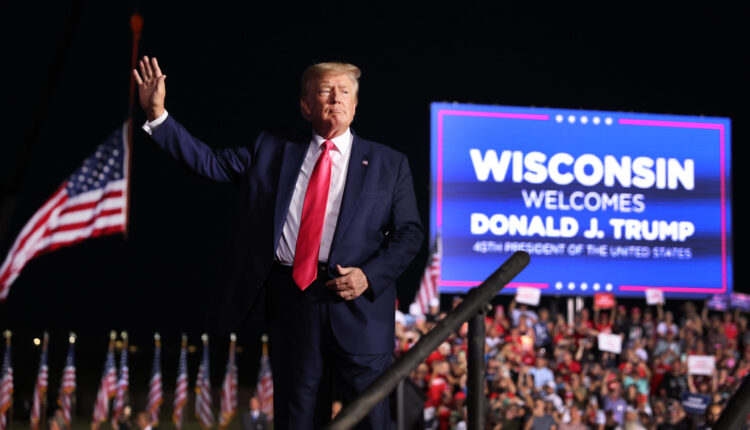 By now most political analysts have agreed that the midterms were, overall, a kick in the butt for Republicans.

As outgoing U.S. Rep. Peter Meijer (R-Mich.) memorably put it  in The Washington Post , after the 2022 midterms, “we have no choice but to heed voters when they say that ‘the grass is green, the sky is blue, and by the way, you just got your ass handed to you.’ ”

To Meijer, it was obvious by midnight on Jan. 6 “that if we continued to sleepwalk down the path of crazy we’d face a rude awakening.” Instead of facing facts, he added, “the GOP spent the last two years heading in the same direction and actively avoiding any internal reckoning.”

But it’s far from clear that reckoning is coming any time soon. Ever since Trump ran in 2016, Republicans in Wisconsin have been losing voters in the suburbs of Milwaukee that were former GOP strongholds.

Craig Gilbert, former Washington bureau chief of the Milwaukee Journal Sentinel, now a fellow at Marquette University, writes in an analysis of the last election that Democratic gains in suburban areas of the state in 2022 are “all the more striking when you consider that Republicans had reason to believe they might steady their suburban ship this year, with Donald Trump not on the ballot, with a Democrat in the White House who has poor job ratings, with crime and inflation playing prominent roles in the campaign.”

Instead, U.S. Sen. Ron Johnson, who lost in the Milwaukee suburb of Wauwatosa by 7 points in 2016 lost there by 37 points in 2022. That’s just one of many data points Gilbert lays out to illustrate the Republican collapse in the suburbs.

But RoJo won big in rural areas, making up for his losses in the white flight suburbs around Milwaukee.

The angry, out-there Trumpist message is resonating with a group of increasingly isolated voters in tiny towns and rural areas of Wisconsin.

The question Gilbert poses is whether doubling down on that base of support can continue to make up for Republican losses elsewhere. The answer is not clear, but demographics are not working in the GOP’s favor. The areas where they’re losing steam are the parts of the state that are growing the fastest. The areas where they show the most strength are dwindling as young people leave rural areas.

To help them chart a course for the next election, the Wisconsin Republican Party just hired a paid party leader for the first time — a step Johnson strongly supported. Veteran GOP consultant Brian Schimming took the job, which will involve raising lots of money and charting a new course for the party.

In an interview Sunday with WISN TV’s UPFRONT, Schimming announced his plans to lead his party wherever the wind may blow.

Trump is “certainly a vote-driver here in Wisconsin,” Schimming observed, and offered this advice to Trump supporters: “If you’re going to support Donald Trump, go do it, but have a second choice.”

To the Trump-averse Republican, he said, “Don’t say you won’t vote for Donald Trump, because he could end up the nominee.”

“There’s a way to be in both places there,” Schimming added, “and we will be.”

Schimming unveiled this bit of opportunistic wisdom just one day before the House committee investigating the Jan. 6 attack on the U.S. Capitol announced its criminal referrals for Trump.

The committee report showed that Trump was fully aware he’d lost the 2020 election when he incited the mob that attacked the U.S. Capitol. The bipartisan members recommended the Department of Justice pursue criminal charges against Trump for obstructing, conspiracy, and inciting, assisting or aiding an insurrection. Wisconsin Republican party officials were up to their eyeballs in the conspiracy to undermine the results of the 2020 election. Former party chair Andrew Hitt was one of the fake electors who knowingly undermined the will of the voters by casting fraudulent electoral ballots for Trump. A staffer for Ron Johnson attempted to pass those ballots along to Vice President Mike Pence.

And let’s not forget that Trump, shortly after announcing he’s running again in 2024, called for suspending the U.S. Constitution so he can be reinstalled as president ahead of the next election.

It takes a lot of cognitive dissonance to pretend that Trump is just another politician and that supporting him amounts to the same thing as supporting any other political candidate.

Trump is an authoritarian who abetted the attempted overthrow of the U.S. government. That’s too much for a lot of voters, including the wealthy and well educated country club types who’ve been abandoning the Republican party.

In our closely divided state, the GOP is in a tough place if its plan going forward is to go all in with only those voters who will happily countenance insurrection and violent racism.

Schimming’s approach — go ahead and hang out your Trump banner but be ready to raise the flag for another candidate if things go south — is absurd. Most voters are either passionately pro-Trump or totally turned off.

Trying to stake out a middle of the road, kinda-insurrectionist, kinda noncommittal position is simply a declaration of moral bankruptcy. And Johnson, after his narrow reelection, the de facto leader of the state party, is not healthy for anyone.

True to form, right after he won, he held a public forum on the dangers of getting vaccinated just as the triple pandemic winter set in.

After GOP candidate for governor Tim Michels lost, aides groused that the millionaire Michels just wasn’t willing to work very hard. The guy was a “freaking dandy” who worked “banker’s hours” at best, anonymous Republicans groused to investigative columnist Dan Bice of the Milwaukee Journal Sentinel. So much for country club Republicanism.

As the new GOP chair advises voters to keep their seditionist options open and Milwaukee gets ready to host the Republican convention in 2024, things could get scary.

There’s another danger, besides the GOP’s continued game of footsie with an authoritarian megalomaniac and his armed, white supremacist followers. As the Democrats move into the space abandoned by the GOP in the affluent suburbs, there is a temptation to ignore rural voters and further isolate an alienated segment of the electorate.

The collapse of manufacturing, the loss of the family farm, these economic and social crises that have contributed to our bitterly divided state need addressing. Instead of exploiting people’s anger and sense of abandonment (Republicans) or turning away and ignoring rural issues (Democrats) our state badly needs leaders of both parties who will pay attention to the issues that affect all of us.

Gov. Tony Evers, who won in part by peeling off votes in deep-red, rural areas, has modeled that approach, focusing on expanding broadband, supporting small town Main Street businesses, and tackling the crisis of water poisoned by PFAS chemicals and manure runoff.

Evers is the antithesis of his predecessor, Republican Gov. Scott Walker, who laid the groundwork for our current hyper-partisan divide with his us-against-them governing style, sticking it to unionized public employees on behalf of nonunion workers who were barely getting by, and leaving both groups worse off. If there is any hope of a saner, more secure future, we are going to need to figure out how to get back together again. And by that I do not mean supporting more mainstream candidates, while keeping a fascist flag in your back pocket.