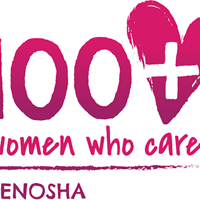 A local volunteer organization, 100+ Women Who Care Kenosha, which is focused on collective impact through local philanthropy, has announced it broke its attendance record during its recent successful gathering which resulted in a large donation to the Kenosha County Food Bank.

The group held its second quarterly meeting of the year on Aug. 11 on the rooftop of The Apis Hotel & Restaurant, and 102 women raised $10,240 at the event. Funds were awarded to the local nonprofit receiving the largest number of votes by attendees: the Kenosha County Food Bank.

Since 2018, nearly $140,000 has been donated to nonprofit organizations serving Kenosha County. Through the support of matching funds from the Robert Schulze Foundation, over $30,000 has been added to the community’s donations.

Each attendee who brings a donation — $100 for women over 40, $50 for women age 20-39, or $20 for women aged 13-19 — may nominate a local nonprofit of her choice. From those nominations, three charities are chosen at random. A representative from each charity speaks briefly to the guests, describing their mission and service to the community. Attendees then vote and the winning nonprofit receives all donations collected that evening.

The Kenosha group was formed in 2018 and is open to the public, with 90-minute meetings held quarterly.

The next meeting is Nov. 1. To learn more, visit the 100+ Women Who Care-Kenosha Facebook page @100WWCKenosha or 100WWCKenosha.org.

Even kids have to deal with toxic friendships. Veuer’s Keri Lumm shares advice from experts.

Coined by Ruby Warrington for her 2018 book Sober Curious, the term refers to questioning everything about your relationship with alcohol and …

The goal of being happy can sometimes feel like such a burden! But if you break it down into concise steps, maybe it may seem more achievable?…

When putting your body through any kind of physical strain, it’s important to know when you’ve gone too far. Yair Ben-Dor has more.

The water is no longer rising, but does that mean the danger has come and gone? Not exactly. Here are the four after-flood dangers to watch out for.

An aging immune system has been found to be a direct consequence of different types of stress. Veuer’s Maria Mercedes Galuppo has the story.

There’s only thing worse than getting a call from your ex, that’s spam text messages. Veuer’s Maria Mercedes Galuppo has the story.

Having a healthy breakfast is essential for setting kids up for a long day of learning.

There are undoubtedly greater dangers than being hit by lightning: The chance of being struck is less than one in a million. However, it’s bed…

What are your salary expectations? It’s an interview question that’s the stuff of nightmares since it can leave you getting paid less than you…

Check out this video for four ways to cut a watermelon.

Sally Duffin, registered nutritional therapist for Vitaminology, has shared her top foods for helping manage the demands of modern life.

Travel attendants have spoken and passengers need to step up their game. Yair Ben-Dor has more.

According to a survey conducted by Natixis Investment Managers, the average age Americans stop working is 62. But the right age for you may be…