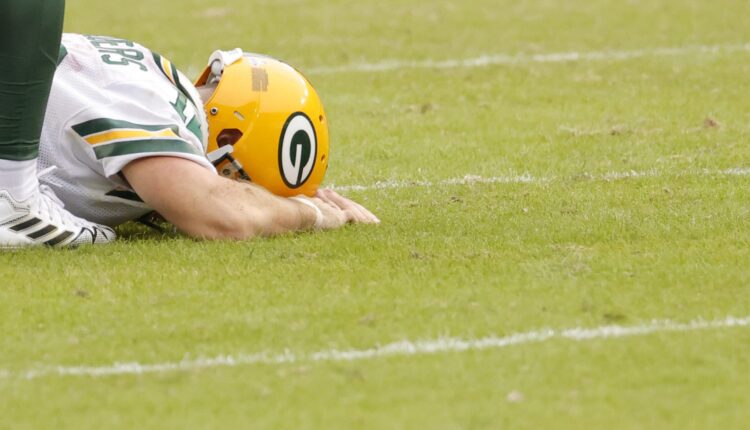 Oof. Another ugly performance from the Green Bay Packers resulted in their third straight loss as they fell to 3-4 on the season.

For some reason, I went back and rewatched their performance, and as always, I have my three big takeaways from what we saw. If you’re up for it, let’s dive in.

The Packers’ offense has to crawl before they can walk

We can spend all week discussing what adjustments Matt LaFleur and Aaron Rodgers need to make the offensive game plan in order to get the most out of this team. However, none of that really matters if Green Bay can’t execute the little things.

The Packers entered Sunday’s contest as one of the least penalized teams in football but were called for nine against Washington, with six of them coming on offense. Two of these penalties occurred pre-snap, with players not even able to align or motion correctly.

Drops were once again another major issue for the Packers—not to mention that after the game, Rodgers discussed how running the wrong route, the wrong stem, or the wrong release has happened too often this season.

However, it’s not as if Rodgers is without blame either, as he has been wildly inaccurate, even on relatively simple pass attempts. Perhaps his injured thumb is playing a factor in some of those throws, but if you’re on the field you need to execute.

On top of all of that, there have been missed blocks, and not only by the offensive linemen but on the fourth and one pass to Romeo Doubs, Sammy Watkins was supposed to block the cornerback, allowing Doubs the opportunity to make a clean catch. But instead, Watkins ran a go-route, and Doubs was hit at the line of scrimmage.

Turnovers remain a big issue overall for this team, with Green Bay sitting at minus-four in turnover differential, and now seven games into the season, they still have yet to win the turnover battle in a single game.

With all of that said, this doesn’t mean that they shouldn’t be making adjustments week to week. I mean something has to change because this offense just isn’t good. But in order for there to be any sort of success, it begins with doing the little things correctly. This Green Bay team doesn’t have the ability to overcome those mistakes.

“Execution of the details, small details, a lot of mental errors today,” Rodgers said via Packers.com. “We just made some silly execution mistakes.

It wasn’t really until the Packers’ final scoring drive that we saw them moving the ball with any regularity—although that came with the assistance of a few penalties and a Washington defense that was playing softer coverages.

Green Bay totaled 232 yards of offense, averaged a measly 4.9 yards per play, and was a combined 0-for-7 on third and fourth downs.

When it comes to how the Washington defense was able to stifle the Packers, they didn’t do anything crazy. They played mostly cover-2, which takes away the deep throws and ones to the sidelines, and only rushed four defenders.

“They didn’t need to,” Rodgers said via The Athletic in reference to Washington only rushing four. “They thought their rush could get home, and they could cover it up on the back end.”

And that’s exactly what happened.

There are mainly two ways to crack a cover-2 shell, and that’s by either finding success — or at least being consistent — in the run game or passing the ball over the middle of the field. The Packers ended up doing neither.

Behind another make-shift offensive line, the Packers relied heavily on the quick passing game to get the ball out of Rodgers’ hands against a stout Washington pass rush. This included a lot of passes at or behind the line of scrimmage, and unfortunately, with an extra defender roaming the secondary, the Commanders were able to limit the Packers’ yards after the catch opportunities on those throws. There also just didn’t seem to be anyone getting open consistently with seven defenders in coverage.

Green Bay also seemed reluctant to push the ball downfield, which in part was due to how Washington was defending the pass, but they also may not have wanted Rodgers holding on to the ball all that long, either.

Based on what Rodgers said after the game, the Packers decided on this offensive line configuration because Jon Runyan and Yosh Nijman had experience playing next to each other on the left side, while Elgton Jenkins and Zach Tom lined up next to each other in training camp , although on the right side.

We knew that running the ball was never going to be easy against this defensive front, but in a close game, Green Bay needed more than 12 attempts. Even at the 3.2 yards per rush that they averaged, doing that consistently would have kept them about even with the sticks and could have set up more manageable third downs.

Sticking with the run throughout the game can also lead to chunk runs in the fourth quarter as the defensive front potentially wears down. With Washington only rushing four, the Packers did have a numbers advantage at the line of scrimmage with five offensive linemen. Ultimately, for an offense that’s having so many issues in the passing game, throwing the ball 35 times seems excessive, and Aaron Jones, who is one of the most explosive backs in football, having only eight carries is a mistake.

Something I’ve brought up previously and again saw on Sunday is that this offense is way too passive and lets the defense dictate what takes place. I understand that Washington’s front against the Packers’ offensive line was an unfavorable mismatch, but it felt like Green Bay’s fear of what might happen if they test that unit led to them rarely challenging them at all. Washington’s defense got comfortable playing 2-high, and the Packers did nothing that forced them to adjust.

When things are going wrong, we all want to be able to point to one particular thing that is causing the issues. However, that isn’t the case for the Packers—it’s everything. From the play calls to the execution to the little details that one would hope were cleaned up in training camp, there’s always something that goes wrong.

The 2022 Packers season is on life support

Yes, the Giants are 6-1, and the Jets are 5-2, but these going up against Daniel Jones, Zach Wilson, and Taylor Heinicke these last three games were supposed to be when the Packers made some hay. But instead, they went 0-3, and now their schedule gets even more challenging.

Next Sunday, the Packers will travel to Buffalo in what feels like a sure loss, which would put them at 3-5. They are then on the road against Detroit, who is 1-5; however, we all know that strange things happen at Ford Field, and this is a Lions team that will play hard for four quarters–which, in all honesty, may be enough to beat Green Bay.

The Packers are then back home to play the 5-2 Cowboys, followed by the 4-2 Titans, before taking on the 6-0 Eagles.

The faint glimmer of hope that Packers fans can cling to right now is that several others in the NFC are underperforming as well, with Tampa Bay, Los Angeles, and San Francisco all .500 or worse.

Perhaps Green Bay turns things around just enough to sneak into the playoffs, time is still on their side, but right now, the Packers are nowhere near being a playoff team.

The 1975 have announced a concert livestream from Madison Square Garden