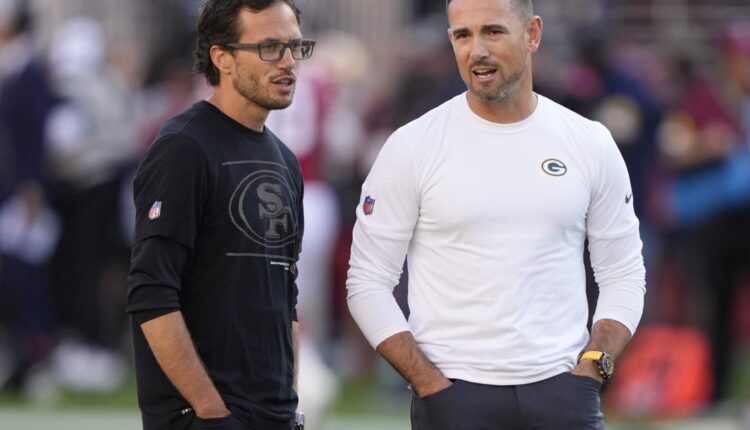 JASON WILDE For the State Journal

Mike McDaniel barely could keep a straight face. The Miami Dolphins first-year coach had just been asked on Friday afternoon what his close friend and this week’s coaching adversary — Packers coach Matt LaFleur — was best at.

“Styling his hair. It’s really good. Brushing his teeth, too. He’s got very, very white teeth,” McDaniel said as the room filled with laughter. Then, answering the question earnestly, “I think (what) he’s best at (is), he has humility that really allows him to never really get complacent. His honest intent and really ignoring the noise and staying true to himself is really, really underrated in terms of the perception of him. I think he’s handled everything about his job with class, whether that’s winning a lot or having any sort of turmoil. He’s one of the reasons they’ve been so successful.

“It’s a different ballgame when you’re the head coach of the Green Bay Packers. You’re in a place where you are front and center, the main ticket, the big ticket, in that town and everything is combined and there’s high expectations. I think he gracefully manages a lot of things in a way that I really appreciate — and has definitely rubbed off on me in my short journey as a head coach.”

Then, in closing, McDaniel couldn’t help himself. “So he’s a great person, a great football mind, a hard worker,” he concluded, “and I think he’d probably be in the top three most-attractive head coaches in the history of the National Football League.”

All kidding aside, the pair have been close since working together with the Houston Texans in 2008. After McDaniel lost his job with the Texans, it was LaFleur who helped him get back into the league with Washington, where he, Kyle Shanahan and Sean McVay were all assistants with head-coaching futures.

While LaFleur took time out during the week to express his feelings for McDaniel — “He’s a really good person that cares a lot about people, cares a lot about the game and the job, and he does a great job,” he said, adding they are “super tight” — theirs is a mutual admiration society from an offensive scheme perspective, too.

While some might suggest the proliferation of the McVay/Shanahan offense leaguewide has created challenges with defenses gearing up to stop that style of play, LaFleur said it has actually given him more ideas to incorporate into his offense — with the similarities set to be on display in this game.

“I think a lot of times it can be an advantage when you see similar plays and how they play out and how teams defend them,” LaFleur said. “I think it leads to some creativity, quite honestly, because you might see the same concept that you have that gets ran and it’s like, ‘OK, what wrinkle can I throw off of this?’”

Asked about the Packers’ 29th-ranked run defense, McDaniel insisted late in the week “sometimes the numbers can be misleading.” He then went on to praise the Packers’ pass defense, which he called “extremely, extremely good.”

While the Los Angeles Rams didn’t get much going with either approach on Monday night, the Chicago Bears got not one but two deep strikes against Packers Pro Bowl cornerback Jaire Alexander, and Dolphins wideouts Tyreek Hill and Jaylen Waddle are one of the league’s most explosive duos with a combined 28 catches of 25 yards or more.

Packers fans surely haven’t forgotten running back Raheem Mostert, who ran for a mind-boggling 220 yards and four touchdowns — with McDaniel as the 49ers’ offensive run-game coordinator at the time — in the 2019 NFC Championship Game against the Packers, with the Niners’ 37-20 win sending them to the Super Bowl.

For Aaron Rodgers, 2023 return will hinge on own feelings — but return of vets wouldn’t hurt

Now they’re reunited in Miami, in part at McDaniel’s behavior — and he’s made McDaniel look brilliant with 746 rushing yards on only 153 carries this season, including a 136-yard effort against Buffalo last week.

Against the Packers’ horrendous run defense, he could have another day such as he did for the 49ers with that Super Bowl berth on the line.

“I try to stay in my lane. But we had great conversations about, ‘Hey, this is how I feel about this player. This is how I know him to be,’” McDaniel said of his talks with Dolphins personnel department. “He is different. He’s unique. … Just rare human being, rare athletic skillset. I was all in and aware that my conviction and my belief in the human being might lead us astray at some point. So they did their due diligence and fortunately, it matched up with my hope and expectations.

“(Against Buffalo), he had the look in his eye that was very familiar, and it was awesome to see him exhibit for the 1,900th time, ‘Hey, I can do this, even though some people think I can’t. ‘ He’s cut of a different cloth.”

TOP STORIES OF 2022 NO. 6 :Kenosha has most fatal fires in a single year in recent memory