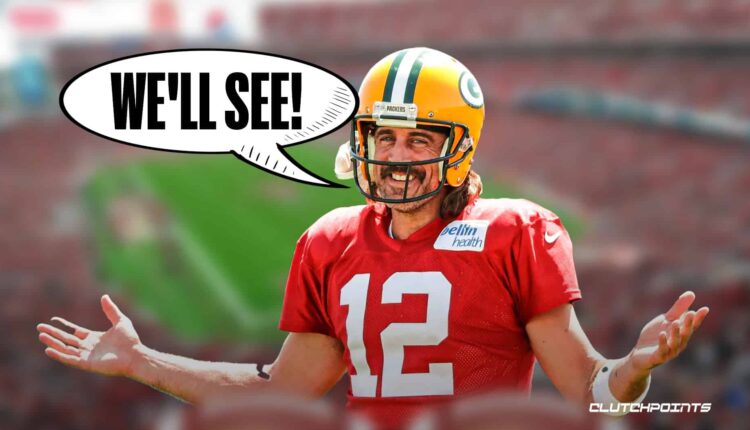 Aaron Rodgers’ future is one of the biggest mysteries in store for the 2023 NFL offseason, and the Green Bay Packers QB addressed the latest buzz during his Tuesday sitdown on the Pat McAfee Show. Amid rumors of a potential trade to the New York Jets, links to other teams, and even retirement, Rodgers cleared the air by confirming that no such decision has been made, describing all the noise as “conjecture.”

Speaking with McAfee, Rodgers made clear that his future is still undecided, saying, “That’s all conjecture until I decide what I want to do moving forward.”

For now, Rodgers is just loafing around, admitting he needed some time to “decompress” and “relax” after a difficult regular season with the Packers. He’ll be busting out the golf clubs, too, with plans to participate in the Pro-AM at Pebble Beach during the offseason.

While Packers fans, and most football fans, are eagerly awaiting Rodgers’ decision on his future plans, it shouldn’t come as a major surprise that he didn’t have a decisive update on Tuesday. He has plenty of time to mull over his future, and whether he even wants to play football in 2023, let alone in Green Bay.

Perhaps he’ll be able to do some of that critical thinking while on the golf course.

If Aaron Rodgers ends up leaving the Packers, the Las Vegas Raiders and New York Jets are deemed to be among his most likely landing spots. Of course, he could also decide he’s had enough and opt for retirement.

His latest update didn’t provide much insight into the impactful decision that looms ahead, so Packers fans will have to keep on waiting until he’s ready to make a call one way or the other.