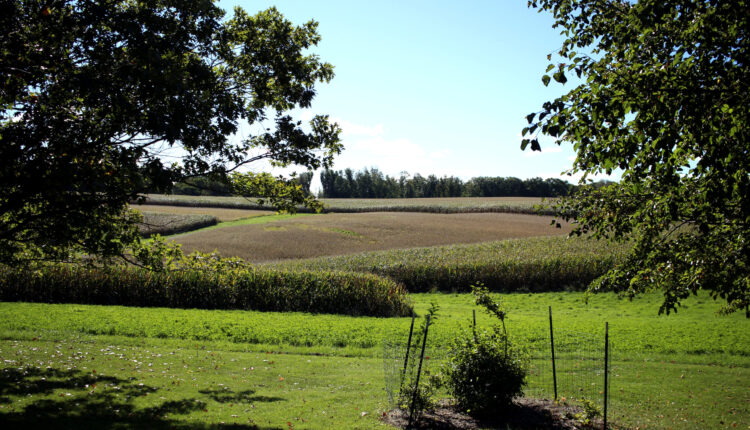 In the decade since Obama won Wisconsin, the state’s political geography has been summed up into an oft-repeated, if over-simplified narrative — the rural parts of the state are red and the urban ones blue.

In the 2022 midterm elections under the state’s new and more gerrymandered political maps, Republicans are more likely to win a veto-proof supermajority in both houses of the Legislature than Democrats are to get a simple majority, but the statewide races for governor, U.S. senator and attorney general promise to be decided by razor thin margins.

Democrats and candidates backed by Democrats have won 10 of the last 11 statewide elections in the 50-50 state but in a national political environment that favors Republicans, polls show that gubernatorial candidate Tim Michels and incumbent Sen. Ron Johnson are neck and neck with their Democratic opponents, Gov. Tony Evers and Lt. Gov. Mandela Barnes.

Michels has posted online about his regular campaign stops in the Democratic stronghold of Milwaukee, but Democrats running and voting in rural parts of the state are questioning if the party will show up to fight for votes in the small communities across rural Wisconsin.

They see a party that failed to put a Democrat on the ballot in two congressional districts and a national party that they feel has written them off.

“The Democratic Party has abandoned us,” says Jayne Swiggum, a Democrat running to unseat Rep. Loren Oldenburg (R-Viroqua) in the state’s 96th Assembly District. “That makes those of us around here feel like, ‘Oh, apparently we aren’t important enough.’ You know, that flyover state feeling, that makes me mad. But yeah, I do think that the Democratic Party has forgotten us. It used to be the party of working people. It still wants to be but it’s not. It can be again. But truly it has forgotten us.”

Jayne Swiggum looks out over one of the Driftless Region’s fields. (Henry Redman | Wisconsin Examiner)

Jeff Spitzer-Resnick, an attorney who recently moved from Madison to Adams County, got so frustrated with the lack of outreach from Democrats to him and his new neighbors, he started paying to put ads supporting Democratic candidates in the local weekly ad mailer.

“It appears, for frankly no good reason, that the Democratic Party has written off rural Wisconsin, which is a horrible mistake,” he says. “A lot of Wisconsin counties are Obama-Trump counties. That means there are swing voters who can vote for candidates as opposite as Obama and Trump. In a purple state with razor thin margins, why wouldn’t you put as much into every part of the state?”

State Sen. Brad Pfaff (D-Onalaska) is running for the open seat in the state’s 3rd Congressional District. Made up of largely rural parts of Western Wisconsin, the district is one of the most closely contested in the country. Pfaff, the former secretary-designee of the Wisconsin Department of Agriculture, Trade and Consumer Protection, can’t afford to ignore the rural parts of the district in his race against Republican Derrick Van Orden, but he says he recognizes the way voters in these parts of the state have felt left out by the modern Democratic party.

“I will say this, I will never abandon rural America. I’m a Democrat, I was raised a Democrat, raised with rural, Democratic values,” Pfaff says. “We didn’t talk about partisan politics in the house. We just talked about things like hard work, dedication, resilience, and we were part of a community.

Despite that sentiment, the state’s Democratic Party says it’s dedicated to building up the infrastructure to compete for votes all over the state.

“Here at WisDems, we’re committed to earning every last vote. In the past several years, we’ve dedicated significant resources and people power to building the necessary party infrastructure to reduce GOP margins and connect with blue voters in rural Wisconsin,” says Courtney Beyer, spokesperson for the Democratic Party of Wisconsin. “Regardless of November’s results, we will continue to build on the years of work we’ve done to reach voters in every part of the state — including Republican strongholds.”

But Spitzer-Resnick, who lives on a county highway that is well-trafficked by rural Wisconsin standards, he says he’s tried, and failed, several times just to have the party send him big billboard signs to plant in his yard.

“I have a long stretch of land along a county highway, I could put up large signs, I’ve asked for signs,” he says. “The Barnes and Pfaff campaigns said they’d get them to me but they haven’t.” 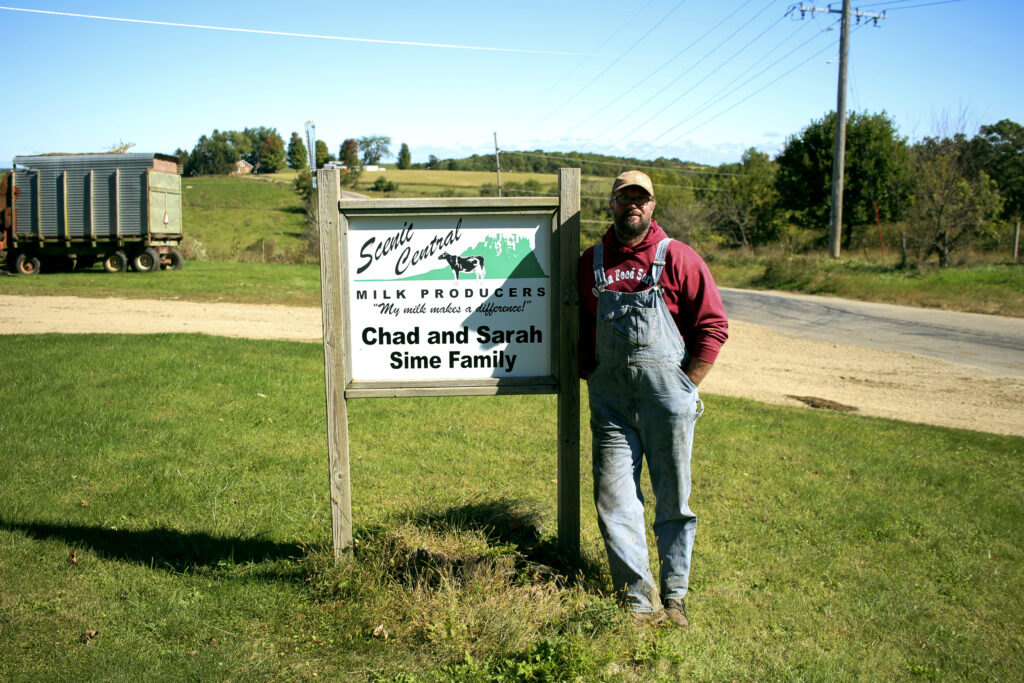 Swiggum, a nurse and former English teacher, grew up in Gays Mills in Crawford County. Driving through the district that crosses Crawford, Monroe and Vernon counties, she says she can speed a bit because she knows the roads — that wind through the Driftless Area’s bluffs and woods — like the back of her hand. She says that the area’s residents will still consider you an outsider if your family moved in just 50 years ago.

Oldenburg, her opponent, whose family is also from the district, was first elected to the seat in 2018, winning 51.7% of the vote against Democrat Paul Buhr. Two years later, he was reelected with 56% of the vote. This year, he’s outraising Swiggum by a 3-1 margin.

But Swiggum says she has been knocking on as many doors as she can — adding that she can often get her foot in even the most conservative doors by starting with, “Tell me about your health care.”

And if the Democratic Party has neglected rural America, she doesn’t see Republicans representing the region’s interests either. Oldenburg, Swiggum points out, votes with the Legislature’s Republican leadership nearly all the time. It’s a record she sees as a sign that the interests of the district — which is much more sparsely populated and poorer than, for example, Assembly Speaker Robin Vos’s 63rd District in Racine County — aren’t Oldenburg’s first priority.

If the district’s representative truly had its best interests at heart, she says, he’d be first in line to push for policies such as the acceptance of federal money to expand Medicaid.

For voters in the district, a personal connection with the candidate still helps decide their vote. Chad Sime, a Crawford County dairy farmer who has known Swiggum for years and self-describes as a conservative-leaning independent, is still undecided in a number of races on the ballot this fall, but says he starts to consider his choice at the county fair in the end of August when you “get a chance to meet someone, you know, shake a hand and stuff like that.”

To me, it’s more a person thing than it is necessarily a political thing.

Sime, a father to five kids between the ages of 2 and 14, was on the local school board for more than eight years before he resigned in the middle of local fights about mask mandates and COVID-19 protocols. He says when making those choices, he wants to hear the plan the candidate, Democrat or Republican, has for the issues affecting his farm, his family and his community.

“I’ve never never checked a single party ticket,” he says. “Especially at the state level, you know, you get a chance — knowing Jayne for quite a while back, Brad Pfaff’s been around, I actually met and had a chance to talk to Derrick Van Orden at a Farm Bureau meeting — your more local candidates, which I feel affects you more, are very easy to meet. To me, it’s more a person thing than it is necessarily a political thing.”

“I’m more interested in hearing what that candidate has to do than them telling me what the other candidate didn’t do,” he adds. “I guess for me, that’s very key. I mean, if someone’s [saying], ‘This has been screwed up, that’s been screwed up,’ it’s like, well, you don’t seem to want to fix anything; you’re just pointing this out. I guess for me, that’s probably the single biggest thing. I want to hear what they think, what they want to do, not what somebody else did or didn’t do.”

For Sime, a candidate showing up and making a personal pitch matters. That strategy, according to Kate Felton, an organizing director at Citizen Action of Wisconsin, is important to step-by-step changing the state’s political landscape. Even if a campaign knocks on a rural voter’s door and doesn’t change someone’s mind, at least that voter has now had a positive experience with a Democrat.

“I think it’s also approaching this changing tide of rural Wisconsin politically by remembering that it’s not a lost cause and actually going into those communities and not abandoning them,” Felton says. “Other than that I will say, anecdotally we are hearing a lot from voters that the way they’re seeing the Republican party is no longer representing them. That they are not feeling good about voting for Republicans who support the insurrection, Republicans who support tax breaks for the rich, things like that and frankly Republicans that support everything that’s happening in the news involving Trump. I’ve been doing this a really long time and I’m seeing a stark change in tides among rural people.”

But by not actively campaigning in rural areas, Democrats might be missing an opportunity to capture those votes.

“It’s worth the money because there is no changing the tides in Wisconsin without organizing rural, working-class people,” Felton says. “In this election we’ve been one of the few organizations that are going out and talking to rural voters and in some cases driving in between houses to talk to them. In a rural place you have to drive in between doors. We’re out there doing that. What we’re finding is that a lot of rural people have never had their door knocked on. They’re people who are sort of surprised that you’re there, but overall, they’re pleasantly surprised someone cares about how they’re voting.”