Book Review: Fightin’ for the Union 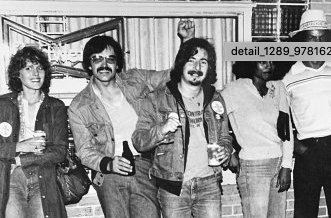 Amid the slow-motion horrors of these times—an inexorable and seemingly intractable pandemic and equally persistent coup efforts that began long before the US Capitol attack—there are occasions for guarded optimism. One is the resurgence of American unionism, reflected in the rolling victories of Starbucks workers and an emboldened workforce willing to strike in industries ranging from health care to food processing.

All of that makes Jon Melrod’s Fighting Times: Organizing on the Front Lines of the Class War a timely bit of history from a half-century ago. Melrod, a veteran of one of the United Auto Workers union’s most militant locals who went on to become a human rights lawyer, offers up an activist memoir that reflects all the particularity of the time and place it chronicles: the 1970s and 1980s in Kenosha, Wisconsin, a small industrial city. But the book is also a window into an inflection point in the modern US labor movement that has the potential to offer lessons for a new generation of workers and union activists.

The child of a middle-class, white, Jewish family who grew up in a deeply segregated Washington, DC, in the 1950s and 1960s, Melrod took an unexpected path to the factory floor and union activism that wound through boarding school and attendance at the University of Wisconsin-Madison. But he was just one of hundreds of New Left student organizers in those days who entered the blue-collar world, producing a crop of local union leaders who helped bring generational change to the labor movement.

Melrod was part of a cadre of young UAW Local 72 firebrands at the American Motors plant in Kenosha who stood up to imperious supervisors and management while also putting pressure on union leaders they found too accommodating. The book takes its name from an underground union newspaper that Melrod and co-workers published, which earned a footnote in labor and journalism history when it overcame a potentially ruinous $4 million libel suit (the judge directed a guilty verdict, but the jury awarded no damages), and the National Labor Relations Board subsequently ordered American Motors to pay out $238,000 after a finding that the company’s role in funding and directing the lawsuit amounted to an unfair, anti-union labor practice.

He is unapologetic in his advocacy for worker militancy and challenging management at every turn: Leaders in the militant caucus “pulled no punches in going toe-to-toe with upper management,” Melrod writes. “A factory is governed as an autocracy, with a rigid chain of command that depends on unchallenged power to maintain discipline.”

Melrod and the union caucus behind the paper didn’t just advocate for tougher representation of workers; they engaged in community campaigns against police brutality in Milwaukee, as well as in anti-racism solidarity with Black communities in the South, taking aim at racism and sexism on the shop floor and disparate disciplinary measures and treatment that saw Black workers fired and white ones simply “talked to” after conflicts on the line.

“Once Fighting Times became known as a voice against racism, we no longer needed to root out articles or incidents of discrimination. Stories found us,” Melrod writes. The work was morally grounded, but it was also good politics for union stewards who were willing to defend the rights of their marginalized co-workers: “At election time we knew we could rely on many workers of color and women who viewed us as their stalwart advocates and defenders.”

In its stories of triumph, as the union built support through its intersection with other social justice movements of the time, and its hard lessons about the larger forces—global capital flight, deregulation, and increasingly ruthless management that exploited community divisions—that weakened unions and eroded worker power, Fighting Times is both entertaining and potentially instructive.

Erik Gunn is a Wisconsin-based journalist who writes about work, faith, the country, and the city, and is a contributor to The Progressive. He is also deputy editor for the Wisconsin Examiner.