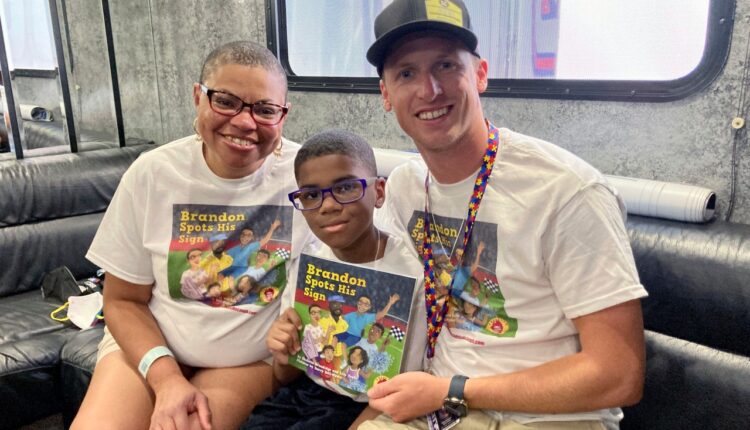 ELKHART LAKE, Wis. (AP) — Brandon Brown wanted a way to change the narrative behind the “Let’s go, Brandon” message after his first career NASCAR victory inadvertently fostered a chant that has been used to insult President Joe Biden.

Brown found that new message thanks to the family of an 8-year-old boy with autism.

Brandon Brundidge of Cottage Grove, Minnesota, was on a spring-break trip to Houston in March and saw signs with the “Let’s go, Brandon” phrase. He believed the signs were meant to encourage him. He consequently started trying activities he’d never attempted before, such as learning to swim and removing the training wheels from his bicycle.

His mother, Sheletta Brundidge, used that story to write a children’s book titled, “Brandon Spots His Sign.” Brown had the cover of Brundidge’s book on the hood of his Camaro for his Xfinity Series race Saturday at Road America.

“To have this come through was like that breakthrough moment for us,” Brown said. “This can be positive. This can be good. It doesn’t have to be hateful or divisive.”

From that point, “Let’s go, Brandon,” became a rallying cry for Biden critics, with signs bearing that message popping up all over. Brown unintentionally found himself in the middle of the firestorm that surrounded these chants.

“I’ve just been hopeful that I could make it a positive, I could have my name back and not have it be so divisive and scary, where it wouldn’t be a political statement for my friends and family to cheer me on during a race,” Brown said.

That’s where the Brundidge family stepped in.

Sheletta Brundidge is the mother of four children, and three of them have autism. She has written children’s books focusing on each of them. She said Brandon often dealt with social anxiety.

That changed after she saw all the “Let’s go, Brandon” signs and assumed people were cheering him on. He suddenly had a whole new attitude and wasn’t nearly as shy about trying new things.

Brown learned about this book from his mother and invited the Brundidge family to Road America. They met in person for the first time this weekend, and the two Brandons became almost friends.

“It feels like I have a twin brother but who’s older than me,” Brandon Brundidge said.

The Brundidges were giving out copies of “Brandon Spots His Sign” at Road America. The book’s cover design decorated Brown’s car, though he was knocked out of Saturday’s race after getting caught up in a multicar wreck that caused him to get examined and released from the infield care center.

Finally, someone found a way for the “Let’s go, Brandon” chant to unite rather than divide.

“I’m sorry for what you went through all this past year,” Sheletta Brundidge told Brown on Saturday. “I know it’s been horrible. But I’m so glad it happened because this child would not have this breakthrough (otherwise). He still would be afraid to ride his bike without training wheels. He’s literally walking up to kids and passing out this book. He would have never done that (before).”

1st monkeypox case confirmed in Wisconsin; what you need to know