Centenarian from Kenosha reflects on her life as she marks 100 years today, honored by Coast Guard | Local News 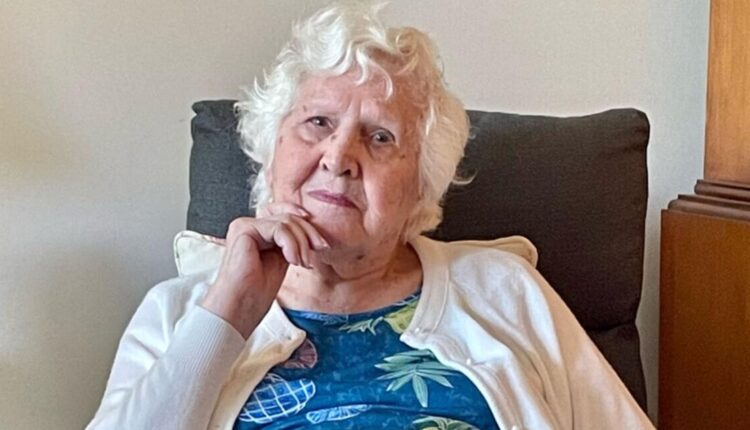 For Kenosha resident Marie Goff the date of July 25, 2022, holds special meaning, as she marks her 100th birthday today.

We caught up with Marie Goff at her apartment in Kenosha with her daughter Kristie, and granddaughter Simone. Marie shared with us memories from her time in military service during WWII, what it was like raising six children, and the key to living a long and happy life.

What are your hobbies?“I never had time for many hobbies, because I had six children,” said Marie, “When I was young and living in Chicago though, I did enjoy the stock market. I worked in an office right across the street from the stock exchange, so I would go there during my lunch hour and sit and listen to what the men bought.”

What was dating like growing up?“Well, my husband lived next door growing up. We were always friendly neighbors, we used to go hiking a lot together. We would hike where Carthage College now is,” said Marie, “It was like a jungle then, not developed at all. We were just friends at the time though, he wasn’t a favorite yet.”

When was your first plane ride?“I always wanted to ride in a plane. The first time I did was when I bought some liberty bonds. When you bought 10 liberty bonds, then you got to ride in an airplane,” she said. “It was only for about 10 or 15 minutes. I was probably about 18 years old.”

What was the most important invention in your lifetime?“We had a trolley that I would take to my job at the Jockey factory for 3 cents. That was a pretty big deal at the time.”

What inspired you to join military service?“Well for one, I always wanted to,” said Marie, “My brother was a year ahead of me in school. He was just barely out of school that summer and they took him into the service. He didn’t have time for anything, they just took him the day after he graduated from high school. When he was killed in the service, that’s when I became determined that I would join too. I was working in Chicago and I joined the SPARs (the acronym for “Semper Paratus— Always Ready,” which was the women’s branch of the United States Coast Guard Reserve). Marie joined at 22 and worked at the “Ship’s Store” during her service. “We went for an initiation in Palm Beach, Fla., before I was stationed in Seattle. I made friends with a lot of the girls, especially the ones I lived with. We had nicknames for each other. mine was dusty.”

“I don’t exactly remember the first,” she said, “but I know I voted for Kennedy.”

How have the lives of women changed?

“We minded our parents quite a bit more. I come from a big family,” she said, “and we got along very frugally. I never believed in women working and not being home with their family. Now the mothers have to work and caregivers are paid to watch the children.”

What movie did you see first?

“I was very lucky that my brother worked for Orpheum Theater. We could get in free to movies,” she said. “I don’t remember the first I saw, but we loved Shirley Temple!”

“I watch TV, but only my favorite ones,” said Marie, “Mostly western movies.”

What was your favorite, and least favorite year?

“1968! I never liked that year. There was a lot going on in the world at that time. The only good thing that came of it was my granddaughter Simone,” she said. “One of my favorite years was when my husband and I went to college together at Carroll College in Waukesha. My husband and I were just about the only married couple in the whole school.”

“I kind of think it’s because I came from a large family. That was a role model for me, I had a large family myself. We were always together, and we did a lot of things together. My husband and I used to walk together at Petrifying Springs with the kids. My husband would walk in the front of the line, and I would walk at the end. Having a big family definitely kept me young, (as did) the home cooked meals!”

What advice do you have for younger people?

“My advice is to travel, go and see what is out there. When I was in the service we would sometimes go on fishing trips, and horse riding. I loved getting to have those experiences.”

US Coast Guard Sector Lake Michigan celebrated her birthday on Saturday, presenting a letter of commendation and a plaque at Marie’s granddaughter’s home in Oak Creek. “It was truly a pleasure to have the opportunity to celebrate with Marie,” said US Coast Guard Cmdr. Doreen McCarthy, Deputy Commander, Sector Lake Michigan. “She served our nation as a SPAR at a pivotal time in history and established a legacy for all of us to follow.”

Secrets to longevity from some of the world’s oldest people

When Emma Moran died in 2017 at age 117, she was the oldest person in the world. The year before her death, she offered this diet advice: “I eat two eggs a day, and that’s it. And cookies.”

American Gertrude Weaver was 116 when she died in 2015. Before her death, she told Time magazine her secret to a long life: “Kindness. Treat people right and be nice to other people the way you want them to be nice to you. The Lord blessed me, I think, because I’m good to my family and good to my children and grandchildren. And I feed them.”

Actor and comedian George Burns was 100 when he died in 1996. He had this to say about growing old: “By the time you’re 80 years old you’ve learned everything. You only have to remember it.”

Misao Okawa was 117 when she died in 2015 in Japan. Before her death, she told an interviewer: “Eating delicious things is a key to my longevity.”

Violet Brown was 117 when she died in Jamaica in 2017. “Honor your mother and father so your days may be long,” she once said when asked about her secret to a long life.

Susannah Mushatt Jones was 116 when she died in 2016 in Brooklyn. Her niece told the New York Post her “health food” routine: “She’ll eat bacon all day long.”

Fred Hale Sr. was still shoveling snow off his roof at 103 and driving at 108. He died in November 2004 at age 113. A Boston Red Sox fan, he was one of the few Sox fans able see the team win titles 86 years apart, in 1918 and 2004. He was a veteran beekeeper, and insisted on consuming a daily regimen of a teaspoonful of honey and bee pollen. Although he never smoked and rarely drank alcohol, he did sometimes wash the honey down with a breakfast nip of whiskey.

Reg Dean lived to 110 and was Britain’s oldest man at the time of his death in 2013. He once told an interviewer that his long life could be due to a mysterious potion that a doctor in Bombay gave him when he was young. “He said ‘if you drink this you will live forever’ – and this is the result,” he said.