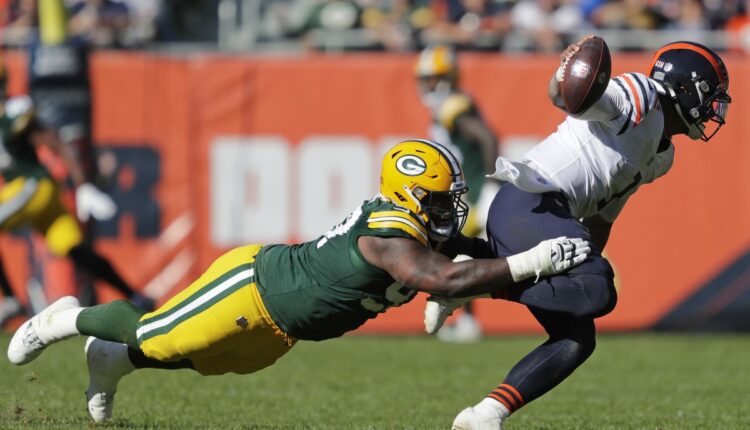 Perhaps the most welcome sight for the Bears in Sunday’s game came on defense.

Their pass rush managed to put heat on Trey Lance with a basic four-man rush. It’s not easy for defensive linemen to pass rush on a field soaked with water or on a muddy or frozen field.

It gives rise to hope they can manage a pass rush without overcommitting with the blitz against the Packers.

“That to me, it’s really good because you now have seven guys in coverage and you’re able to fill windows and that’s really good against a good quarterback,” coach Matt Eberflus said. “If you’re playing a guy whose got a little bit more inexperience, you can get away with sending five or more after him and open up those windows and that will affect him because he’ll look down at the rush a lot of time but when you have a guy with experience, you really want to be able to do that most of the time, have seven guys in coverage, rush with four.”

The Bears have seen in the past what Aaron Rodgers can do against a blitz so sending four can be a big help.

They’re playing against an elite defense so holding Rodgers in check could be critical, because points will be at a premium.

Here are the matchups they’re up against where they could have the most problems Sunday night at Lambeau Field.

Mooney was practically invisible in the game on Sunday, and was held last year in Lambeau Field to catch one by the Packers secondary. His route running and speed normally have done enough to get him open. For instance, he had 12 catches for 126 yards against the Vikings in last year’s season finale and finished the season with 29 catches in the last four games. Alexander is one of the league’s elite cornerbacks and is healthy now. He had a 72.1 coverage grade from Pro Football Focus last week in a game when the Vikings offense had a surprisingly easy time with Green Bay’s defense. He gave up three receptions in five targets last week but only for 6.7 yards a catch. At 5-foot-10, 196 pounds, Alexander is 20 pounds heavier and a stronger cornerback who can get his hands on Mooney and be physical. Also, he has exactly the same 40 speed as Mooney, 4.38 seconds, so speed is no edge for the Bears receiver.

Mustipher isn’t the first choice for Bears coaches at starting center but until Lucas Patrick’s thumb injury is full strength they will look to him in this role. According to PFF, Mustipher had a solid first game, coming in at 60.1 overall for a grade, which is a good bit higher than his grade on last year. He was especially solid in pass blocking but the Bears need all their linemen to be better blocking the run. They struggled last week. Clark has been a nightmare for the Bears to handle no matter if it’s a guard or the center or both trying to block him. He has great lower body strength and has recorded 4 1/2 sacks and seven tackles for loss against them. Clark generally manages to cave in the Bears interior line blocking each time they face the Bears regardless of the opposition. It will be interesting when he is on the interior between both Mustipher and guard Teven Jenkins because Jenkins is a more physical type of guard, something the Bears really haven’t been able to throw against him since Kyle Long played the position.

Watkins gained a bit of Rodgers’ confidence last week with three catches, something few of the young receivers did. Watkins and Vildor have a bit of a history. Last year it was Watkins who got free at game’s end against Vildor for a 29-yard catch that set up the winning points in Baltimore’s late comeback win over the Bears.

Rodgers found Watkins last week for three receptions but only 18 yards as he has tried to build up a connection with someone, anyone.

Vildor allowed four catches when targeted five times last week for 59 yards according to Sportradar, for a passer rating against of 115.8.

Sure Cobb is 32 now but definitely not done and put a Bears uniform in front of him and he’ll find a way to get catches. He has always had success against them, averaging almost four catches and 54.6 yards per reception vs. their secondary over the years. With Rodgers searching for dependable targets, Cobb would make sense as a veteran who has a long connection with him. The two hooked up last week only for two catches and 14 yards, so look for them to bounce back. The fact they’re facing a rookie nickel cornerback will be especially inviting. Gordon allowed five catches in seven targets last week for 70 yards. He made one big mistake and let a receiver get behind him, but his tackle was generally solid with six total tackles.

On Democracy Day, newsrooms draw attention to a crisis in the U.S. system of government