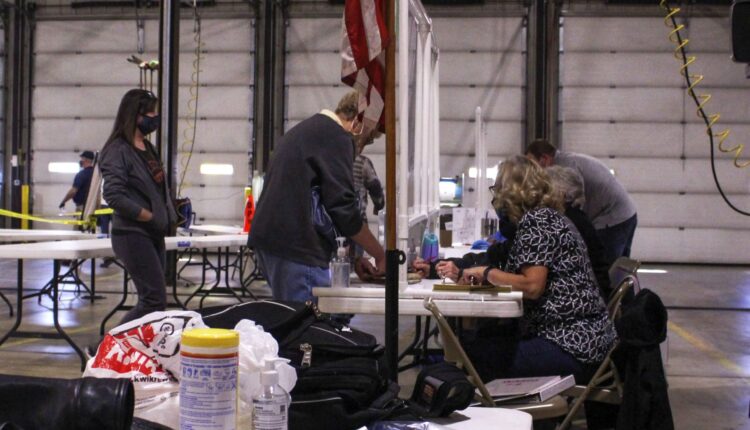 Two Wisconsin clerks say they have a “contingency plan” if partisan election observers attempt to interfere with voting in next month’s election.

City of Portage Clerk Marie Moe and Rock County Clerk Lisa Tollefson said at a press briefing Monday morning that they don’t expect any problems, but — in the wake of Republican efforts to recruit poll watchers looking for signs of fraud or a stolen election — they’re ready if a problem arises.

“We’ve had poll watchers at many, many elections and we’ve always had good success with our poll watchers,” said Moe, who is also president of the Wisconsin Municipal Clerks Association. “They have been knowledgeable, they aren’t there to create a problem or an issue. Certainly, obviously there’s always the first time for everything.”

Moe added that state law requires election observers and poll watchers to sign in at the polling place with their contact information and the organization they’re representing and that she’s spoken with her poll workers about what to do in the event of an incident.

“We do have a plan in place if someone does get disruptive,” she said. “You always need to be prepared.”

Republican-aligned groups and activists who have spent the past two years spreading conspiracy theories about the 2020 election have worked to recruit more poll watchers on the lookout for apparent evidence of wrongdoing. Efforts to recruit poll watchers have been made at events hosted both by the Republican party and prominent election conspiracists.

Cleta Mitchell, a former attorney for the Milwaukee-based law firm Foley & Lardner who sits on the board of the Bradley Foundation, the Milwaukee organization dedicated to funding right-wing causes, has held poll worker recruiting and training events all over the country, including in Wisconsin.

On an episode of Steve Bannon’s podcast, Mitchell, who was heavily involved in former President Donald Trump’s efforts to overturn the results of the 2020 election, said her organization has trained people to watch for violations of the law.

“We have people trained in the law so they can then observe and document and report when things are not being conducted according to the law,” she said.

At the briefing on Monday, hosted by Secure Democracy USA, a nonprofit dedicated to improving voting access, the clerks outlined how Wisconsin’s election processes work and the ways in which the process is secure.

Countering the conspiracies that have sprung up about election administration since 2020 — particularly around the specific rules of absentee voting — Moe said that everything, from the ballot request to any attempts to contact a voter to correct mistakes on the certification and what happens to the ballot once it’s received, is documented.

“Of course everything is documented,” she said. “Documentation is the name of our game. We document what we do when absentee ballots come back to the clerk’s office, the clerks secure those; they aren’t just laying around. In my case, they’re secured in a vault until Election Day where they would go down to the polls in a locked container.”

Tollefson detailed how each step of the election has a system of checks and balances and that each step of the way there are processes to protect against attacks and efforts to tamper with the results.

“Your elections are run by your local clerks, your city village and town clerks. Those 1,850 people make these elections work,” Tollefson said. “They know their communities, they’re the ones that are in tune with what’s happening in your polling locations. They work in concert with the county clerks to make sure your elections are secure.”

Tollefson, whose county includes Janesville, the state’s 10th largest city, outlined each step of the security process from the pre-election machine tests to the post-election audits. She noted that poll workers always work in pairs on Election Day, that county clerks don’t have access to the chain of custody logs and other materials only used by the municipal clerks, that the election computers aren’t connected to the internet and the programming prevents people from changing votes after the fact.

“We certify the elections off the documentation, not transmitted results that you see on the website. We go right to the source,” Tollefson said. “Once we’ve certified the elections it’s sent to the election commission, and they’re doing another check on top of our check, and on top of the checks that were done at those polling locations on election night. There’s a huge group of people that are making our elections secure. And I applaud everyone who helps at the polls, making sure our elections are working well.”