Click It or Ticket campaign launched in Madison County 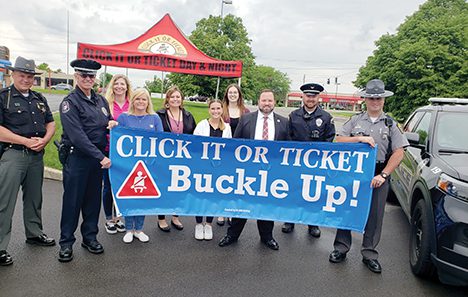 On May 18, the Madison County Safe Communities Coalition brought awareness to area residents during its annual Click It or Ticket Kick-Off event.

The kick-off is the start of the nationwide Click It or Ticket high-visibility seat belt enforcement campaign, held May 23-June 5. The Safe Communities Coalition conducted a seat belt check as drivers entered the Kroger parking lot in London. Terry Family Ice Cream Shoppe provided coupons toward free ice cream cones for residents “caught” wearing their seat belts. Data collected at the event showed that 85 percent of residents were wearing their seat belts.

“This year’s Click It or Ticket Kick-Off was a real success,” said Jen Smith, community health educator at Madison County Public Health. “Through our efforts, we believe we helped keep community members safe and reminded over 130 drivers of the importance of buckling up. Issuing tickets was not our goal, but it was a way to remind people of the importance of such a simple action.”

According to the National Highway Traffic Safety Administration, in 2020, there were 10,893 unbuckled passenger vehicle occupants killed in crashes in the United States. In that same year, 58 percent of passenger vehicle occupants killed at night (6 pm-5:59 am) were not wearing seat belts. That’s why one focus of the Click It or Ticket campaign is nighttime enforcement. Participating law enforcement agencies are taking a no-excuses approach to seat belt law enforcement, writing citations day and night.