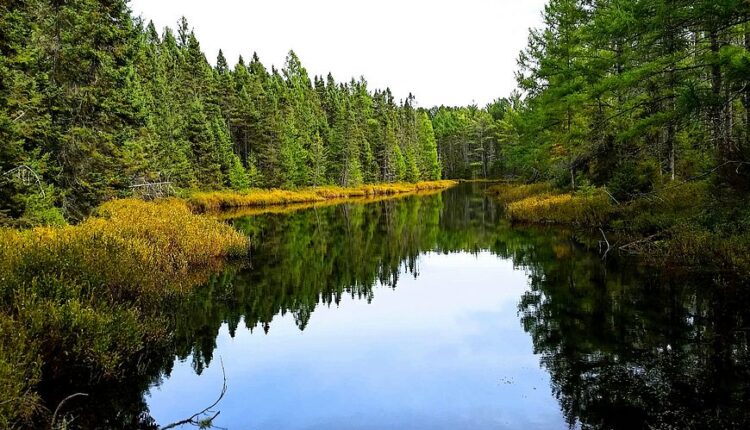 As summer reaches its peak, thousands of vacationers are flocking to the forests and lakes of Northern Wisconsin. But those lakes and forests are undergoing big changes, due to the impacts of climate change, invasive species, an oversized deer population and other human-caused disturbances.

The Wisconsin Examiner takes a look at some of the threats and efforts to address them in a two-part series that begins today. Here, we look at the status of the northern forests with Wisconsin native Lee Frelich, director of the University of Minnesota Center for Forest Ecology and an internationally recognized forest ecologist.

Frelick was born in Janesville, and his interest in forests was nurtured while spending time at his family’s summer home at the tip of the Door County Peninsula. “When I was 12, I checked out the book ‘Vegetation of Wisconsin: An Ordination of Plant Communities,’ by John Curtis,” he says. “I read that book about 10 times and decided I would get a Ph.D. in forest ecology, which I did, at the University of Wisconsin.”

Lee Frelich had just returned from his research plots in Porcupine Mountains of Northern Michigan (Climate Change and the Temperate-Boreal Forest Biome Boundary) when we chatted by phone. He has overseen these plots of old-growth boreal forest for 40 years, and he’s impressed with their resilience and the potential of old growth to mitigate climate change. Frelich has conducted extensive research on the northlands, including impacts of large-scale fire and wind disturbances, the devastation earthworms are causing to the forests and the impacts of climate change. He’s quick to point out that when it comes to forest ecology, multiple factors are often at work. Following are some of his observations, in a question-and-answer format.

You and other researchers have said that worst-case scenarios for northern forests predict immense change if we don’t reduce CO2 levels in the atmosphere. Is it too late to halt that?

Lee Frelich of the Center for Forest Ecology, University of Minnesota, standing by a burr oak on the UM-St. Paul campus. (Photo courtesy of Lee Frelich)

If we look at the extreme high warming scenarios, all the forests in the Midwest are going to die. If you look at CO2 in the atmosphere, it’s still increasing, in fact more each year than 20 years ago, and it does seem there’s pretty good evidence that the atmosphere is pretty sensitive, especially ice sheets and feedback loops of the Earth itself. It’s pretty much the Medea hypothesis. That’s where all the forests would die, and you end up with grasslands climates over huge swaths of land. It’s a good possibility, unless there’s an 80% to 90% reduction in CO2.

Northern Minnesota is warming faster than Wisconsin and Michigan, which are more in the temperate forest biome and also have the stabilizing effects of the Great Lakes.

Is there any room for hope that we’ll address climate change in a meaningful way?

Well, the proportion of people in the U.S. who take it seriously has steadily been increasing. One or 2% more might be enough to get politicians who want to get elected to change. At some point, that has to happen. So, there’s reason for hope, unless that happens too late. There’s a slight chance the extreme scenario is already baked in and we don’t know it, but I wouldn’t be able to say so with certainty.

Climate change is only one of several threats to northern forests. What are some of the others?

The earthworm invasion is huge. It’s causing quite a big change in the chemistry of the water and making waters warmer. Earthworms came to the U.S. with European settlers. In a garden setting, it’s probably good. In forests, it’s a bad thing. [The worms consume vitally important organic matter on the forest floor.] What’s causing the invasion in our forests is fishing bait, live bait. If people don’t use it all, some gets left behind. There are so many introduction points. Earthworms have colonized most of our landscapes in the last five or six decades.

When I was younger, most of the north didn’t have earthworms; now there’s a huge amount of the landscape in the middle stages of invasion. We have thinner forest floors than we used to, leading to some compaction and erosion, warmer soils, erosion of nutrients leaching into the water. Most landscapes are in this middle stage of earthworm invasion, and when nightcrawlers make their way across the land, they will have a much bigger impact.

So, earthworms not good. How about deer populations and their impacts on plant communities?

We need to do a better job of managing deer and invasive species. If you’re going to try to limit the spread of invasive plant species, it’s best to have a balance between deer and habitat. (High deer populations devastate native plant communities in forests, which are replaced by invasives, ecologists say.) I would even extend that to welcoming the wolf population back, because that helps. We need to manage deer populations at a lower level in certain areas. That’s a stress on the forest we can actually manage. If we fail as a society globally to do something about climate change, then we have to manage the other stresses if we can. There are hunters who care about ecological health and realize high deer populations aren’t good. It would be best if we could reduce CO2 and temperatures in 50 years start to drop. Still, we will have to manage invasive species and deer populations.

What have you learned from your research plots in the Porcupines?

I installed eight plots in 1981, each 1¼ acres. There are 335,000 acres that we never logged in the Porcupines.  We established the plots to show how natural disturbance in forests was happening. I was just there last week, and was happy to see big areas free of earthworms. Six of the eight plots pretty much looked exactly how they looked in 1981. In some cases, 400-year-old trees died, and those 350 years old have taken their place. Two of the plots did have significant change; one had extremely heavy browsing by deer, and hemlock seedlings were replaced by red maple. I predicted that in 1985. The other plot was leveled by a windstorm in 1953, and the trees have gotten thinner and taller. In 1981, it was a high density, even-aged stand with a few older trees. Now it’s a mature forest. That was also a predicted change.

Also, in the Sylvania Wilderness [in Upper Michigan], we have plots that contain almost 60 acres where we’ve mapped every tree. They’ve never been logged, so we can show how an old-growth forest responds to changed climate and increasing deer populations. It’s really important to compare the response of those areas to the rest of the land. True old growth is amazingly more advanced in its development. It takes hundreds of years to get to that stage.

Old-growth forests sequester huge amounts of carbon. President Biden issued an executive order on Earth Day to catalog old-growth forests and establish a federal strategy to protect them. But we’ve now learned that logging projects threaten hundreds of thousands of acres of those forests. Should we be setting aside large tracts to help manage climate change?

Yes, from a carbon sequestration point of view it makes sense to move forests to old-growth conditions via management, or to let them get there by natural processes, over as much of the landscape as possible. In many cases they are also more resilient to climate change.

Another important thing to study is the upwelling of cooler temperatures in some landscapes, like Oneida and Vilas counties, where we have gently undulating landscapes and bogs. There is a 2- to 4-centimeter change in temperature because of cooling from these bogs. The next step in research would be to try to model differences in temperatures. That would be a really good step to predict the impacts. If we had 1,000 places across the landscape with cooler features, it might be a positive.

Regarding bogs, and I would say for all forested wetlands, the less human disturbance the better. They should all be preserved for purposes of carbon sequestration, boreal refugia [as in the case of the Oneida and Vilas County bogs] and maintenance of biodiversity in general.

Recent news stories and research reports have focused on change in northern states fisheries due to warming. Walleye and trout declines are already seen and predicted to get worse. Do you see a connection between what’s happening in northern forest ecosystems and the lakes and waterways of the north?

Yes, there’s a strong connection, especially the chemistry of the soil which is determined by the chemistry of trees and other plants that grow there. Especially with a warming climate, you could have conifers replaced by deciduous trees, with more nutrients making their way into the waters. Worms, deer, climate change and the major impact of the cutover on the vast majority of the landscape by European settlers are the biggest factors making the landscape what it is today. Everything is interesting, even though it’s not necessarily good.