Conservatives in U.S. House tank McCarthy bid to be speaker on first ballot 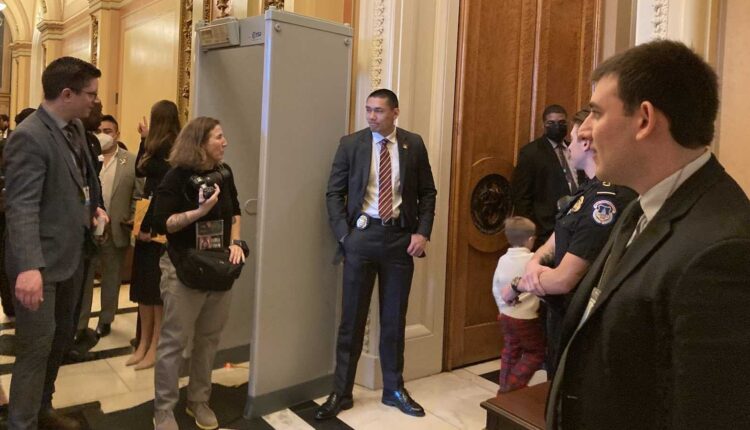 WASHINGTON — Republican control of the U.S. House got off to a rocky start Tuesday when the party was unable to quickly decide who should become speaker amid a sharp disagreement within the party’s more conservative faction.

California Rep. Kevin McCarthy didn’t clinch the backing of the 218 lawmakers he needed to become the head of the chamber during the first ballot, marking the first time in a century the speaker’s election went to multiple ballots. A second ballot was expected Tuesday afternoon.

McCarthy said after the first ballot that GOP leaders want to pass legislation addressing the border and the economy, but can’t do that until the party elects a speaker.

“We’ve certain members right now that think they can use a small majority to try to get themselves the gavel,” he said. “That’s not how it works.”

Reps. Andy Biggs of Arizona, Dan Bishop of North Carolina, Andrew Clyde of Georgia, Eli Crane of Arizona, Matt Gaetz of Florida, Bob Good of Virginia, Paul Gosar of Arizona, Ralph Norman of South Carolina, Scott Perry of Pennsylvania and Matt Rosendale of Montana were among the Republican members to vote against McCarthy on the first ballot. All of those GOP lawmakers voted for Biggs, after Gosar nominated him.

Good called for McCarthy to step aside following the first ballot, saying he expects Jordan to pick up ballots, despite Jordan not wanting the role and trying to get McCarthy the votes he needs to become speaker.

House Republicans have an especially slim majority with just a four-vote margin to pass bills across the floor, or elect a speaker.

The impact of the razor-thin majority and divisions within the Republican Party about policy goals and its future were on full display Tuesday, with conservative members split over whether McCarthy should lead the party during the next two years, or if another lawmaker was better suited to take the helm.

Gaetz said ahead of the first speaker vote the group of conservative GOP lawmakers wants a commitment from McCarthy for balanced budgets, a Texas border plan, term limits and individual votes on earmarks.

Gaetz also said that incoming House Armed Services Committee Chair Mike Rogers, an Alabama Republican, told Gaetz he would be kicked off the committee if he didn’t back McCarthy for speaker.

Boebert told reporters the group presented a plan to McCarthy on Monday evening that could have gotten him the vote needed to become speaker on the first ballot, but he rejected the offer.

“I have been working every day to unify the Republican Party for the American people,” Boebert said before the vote. “And yesterday we had a deal that was not a selfish deal in any way for Kevin McCarthy, to get him the gavel on the first ballot, and he eagerly dismissed us.”

Boebert said one of the policy changes that is especially important to her is a single member motion to vacate, which would allow any member of the House, not just a member of leadership, to call for a vote on the speaker.

“We were just told when we left this door, ‘We will give you single-member motion to vacate’,” Boebert said following the closed-door GOP meeting ahead of the floor vote.

Perry said the Tuesday morning meeting was “about a beat-down and a simulated unity in the room, which really doesn’t exist”

Perry also said the anti-McCarthy Republicans are being “threatened with being kicked off your committees if you don’t vote as you’re ordered to.”

“We took an offer to him last night of things that are completely and wholly within his purview,” Perry said. “If he wants to accept the offer, we’re happy to join the discussion.”

Bishop of North Carolina wrote in a statement ahead of the vote that McCarthy is not the right candidate to be speaker.

“He has perpetuated the Washington status quo that makes this body one of the most unsuccessful and unpopular institutions in the country,” Bishop said. “This is not about personality differences or who has ‘earned’ the position. It’s about the American people.”

The last speaker’s election to go for more than one ballot was in 1923, when Frederick Huntington Gillett, a Massachusetts Republican, didn’t secure the gavel until the ninth ballot, according to the U.S. House Office of the Historian.

Of the 14 speaker elections that have gone to multiple ballots, the 34th Congress, which began in 1855, held the most votes, reaching 133 before electing Nathaniel Prentice Banks to the role.

The U.S. House can’t begin any of its work for the 118th session of Congress until it elects a speaker, putting GOP plans for legislation on hold for the moment.

House Majority Leader Steve Scalise, a Louisiana Republican, said the House GOP will bring “meaningful, ready-to-go” legislation in the House during the first few weeks of the 118th Congress as committees “organize and start moving legislation through regular order.”

One of the first bills would rescind the billions of dollars Democrats included in their signature health care, climate change and tax package last year to increase staff and improve technology at the Internal Revenue Service.

The House will also vote on a resolution that would create a Select Committee on the Strategic Competition Between the United States and the Chinese Communist Party.

The 16-member panel won’t have any legislative authority, meaning its lawmakers won’t focus on writing bills or moving legislation through Congress. Its sole purpose will be “to investigate and submit policy recommendations on the status of the Chinese Communist Party’s economic, technological, and security progress and its competition with the United States.”

Another bill would prohibit the federal government from spending federal dollars on abortion with limited exceptions for rape, incest, or the life of the pregnant person — a provision that already exists in the annual government spending bills.

The measure is somewhat unspecific about when doctors would be able to perform a life-saving abortion, defining it as a “case where a woman suffers from a physical disorder, physical injury, or physical illness that would, as certified by a physician, place the woman in danger of death unless an abortion is performed, including a life-endangering physical condition caused by or arising from the pregnancy itself.”