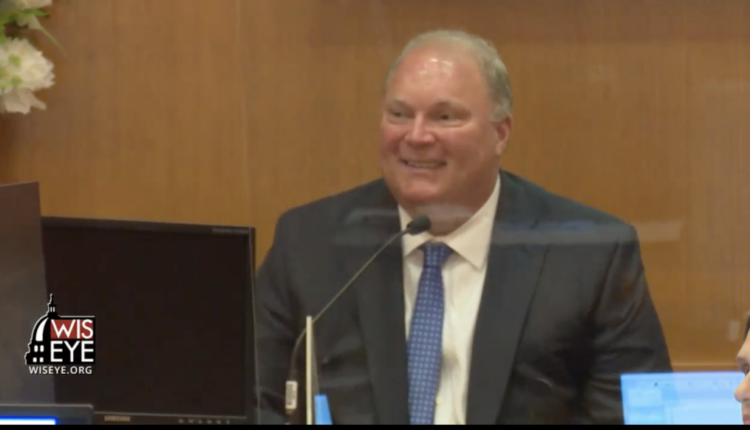 The order, issued by Judge Jacob Frost, requires Gableman to preserve all records related to his review, even if they haven’t been requested under the state’s public records law.

Frost is overseeing the fourth lawsuit against Gableman for his disregarding of state public records laws, which require government entities to retain certain records and provide them to members of the public once requested.

Earlier this year, a lawyer for Gableman admitted that the former justice regularly destroyed records he deemed “irrelevant” to his review and two other Dane County judges have already ordered him to stop deleting his records.

Government watchdog group American Oversight has filed four lawsuits against Gableman because of his refusal to comply with open records requests. He has repeatedly ignored, denied or only partially complied with the law governing public records, according to the lawsuits.

Last month, Dane County Judge Frank Remington found Gableman in contempt of court and ordered him to pay $2,000 a day for his refusal to comply with American Oversight’s requests.

Gableman has made a number of claims as to why he doesn’t need to comply with the requests. He has said that his investigation is still ongoing and, like a police investigation, does not require disclosure until it is closed — even though he’s not acting as a law enforcement officer. Recently, he argued that because his “office of special counsel” is overseen by the Legislature, he’s allowed to delete emails because individual legislators are able to do so. The Legislature’s own attorneys have disagreed with that statement.

Despite his current arguments that he should not have to comply with the state’s public records laws, Gableman played a role in shaping the laws’ interpretation when he served on the state Supreme Court from 2008-18. In many of the decisions, he came down on the side of less transparency.

In 2010, Gableman wrote a concurring opinion in Karen Schill v. Wisconsin Rapids School District. The case involved a man who requested all the emails a number of teachers sent and received from their official government email account for a certain period of time. The teachers resisted, arguing that some of the emails included in the search were “personal.”

In concurring with the majority opinion, Gableman decided that personal emails sent from a government employee’s email account shouldn’t be included in a public records request.

“As I see it, the legislature has made clear that the public has no interest in the disclosure of records that are not reasonably related to the conduct of government affairs,” he wrote. “Or put positively, the public interest extends only to records that reasonably bear upon public affairs. Accordingly, the public would normally have no interest in records relating to purely personal matters. This is not to say the public never has an interest in records relating only to personal matters. Such records are relevant to the conduct of government affairs when personal conduct violates state or federal law, for example, or when the records evince a violation of the public employer’s internal policy. This accords with the purpose of sunshine laws such as the open records law — to ensure that government is behaving itself and spending our tax dollars legally and wisely.”

In a 2012 case, the Milwaukee Journal-Sentinel sued the City of Milwaukee Police Department over its decision to charge the newspaper for the staff time it took to redact personal information from records requested by reporters.

The court’s majority found that a government entity can’t charge for the costs of redacting personal information and Gableman joined a concurrence written by Justice Patience Roggensack.

In Roggensack’s concurrence, she wrote that she agreed with the majority that the law is silent on the question of who should pay for redactions, but that the decision will lead to that burden being placed on the taxpayers, rather than the requester.

“It would be helpful if the Legislature were to revisit the cost issues that have become prominent in public record requests and determine whether the taxpayers should bear the full financial burden for public record requests or whether requesters should be active participants in the cost involved in required record separations,” Roggensack wrote.

A decade after joining that concurrence, Gableman’s review has cost Wisconsin taxpayers more than $1 million. A significant portion of that has gone to attorneys fees in lawsuits, many related to his refusal to comply with the public records laws.

During the suit, the board provided the requested records, but the Journal-Times continued the case to recoup attorney fees.

A 2016 decision involved The Lakeland Times, a newspaper in Minocqua, which filed a records request with the Wisconsin Department of Justice for records of complaints and investigations of wrongdoing by then-Vilas County District Attorney Albert Moustakis. The court ruled that a district attorney cannot stop the release of records related to their wrongdoing, but Gableman joined a partial dissent by Roggensack that argued Moustakis should be given the opportunity to review the records prior to their release.

Another 2016 decision involved a lawsuit filed by the Democratic Party of Wisconsin against the state Department of Justice, which at that time was run by Republican Attorney General Brad Schimel. Democrats were seeking video recordings of two training sessions on prosecuting child sex crimes that Schimel had given to prosecutors and other law enforcement.

The DOJ records custodian denied the request, saying it would disclose important strategies for investigating and prosecuting crimes and should get the same treatment as a prosecutor’s case file.

The Democratic Party sued to force the videos’ disclosure and both a circuit court and the court of appeals agreed, deciding that the DOJ should release them.

Gableman joined the court’s majority in reversing that decision, arguing that releasing the training videos would give away law enforcement secrets to criminals.

“This information would in essence serve as a textbook enlightening Wisconsin criminals on how to avoid detection, elude capture, and escape conviction,” Justice Rebecca Bradley wrote. “The harm arising from release would substantially impair the ongoing battle police and prosecutors face in protecting children and would impede efforts made to catch and prosecute sexual predators who lurk in the shadows and anonymity of internet websites. Although disclosing this information directly to the Democratic Party alone would not necessarily be harmful, releasing the 2009 video to one effectively renders it public to all, including anyone plotting to use it to circumvent the law.”

While he regularly voted with the side of a case that was arguing for less transparency, Gableman’s colleagues sometimes expressed concerns about his interpretation of the state’s public records laws.

“I am concerned that Justice Gableman’s concurrence adds confusion rather than clarity to the law,” Justice Ann Walsh Bradley wrote in a concurrence in 2010.

Could be a “Long Training Camp” for Green Bay Packers Offense