Green Bay Packers could have an elite offensive line in 2022 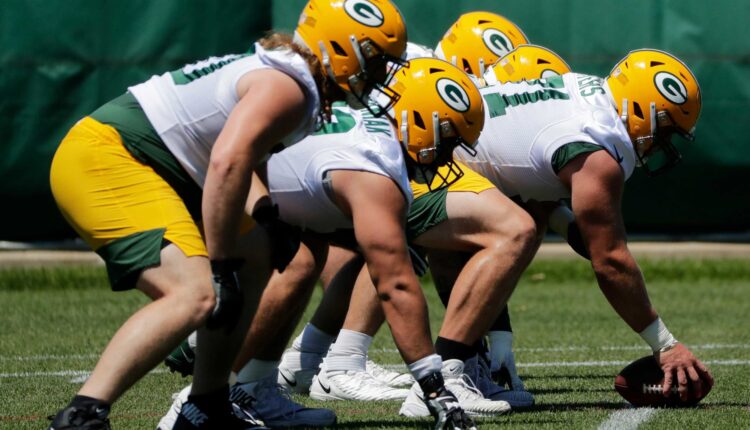 Every season, the Green Bay Packers make it a point to go all out to address the offensive line.

That doesn’t mean it is a problem. For years, going all the way back to Vince Lombardi, the offensive line has almost always been a strength in Green Bay.

But with All-Pro LT David Bakhtiari missing 16 games last season due to his ACL recovery, Pro Bowl G Elgton Jenkins currently recovering from his torn ACL that he suffered last June, and due to the losses of C/G Lucas Patrick and RT Billy Turner in free agency, the Packers went out and added three more offensive linemen in April’s draft.

Keep in mind, those players each play multiple positions on the offensive line, which has always been a huge asset in Green Bay.

Also, there is another interesting prospect that was brought in. T Caleb Jones, an undrafted rookie, out of Indiana.

Jones is a mountain of a man. He is 6-9 and weighs 370 lbs. That is the type of athlete that is worth keeping around for sure.

A really interesting nugget from draft season was that the two highest vertical jumps among all offensive linemen at the NFL Scouting Combine came from Tom and Rhyan. GM Brian Gutekunst has a good eye for spotting athletic big men.

If I am a Packers fan that doesn’t know how to feel about the young offensive linemen or the position in general, know that they went to arguably the best possible place for professional offensive linemen.

The reason being, they have a lot of players sitting in front of them who can help them learn and grow.

Bakhtiari is a five-time All-Pro and the best at his position in the league. Jenkins, who made the Pro Bowl in just his second season, is one of the best-rated blockers in the game and should be back around the mid-season mark.

Third-year G Jon Runyan Jr., who started zero games as a rookie in 2020, started 16 of 17 games and performed admirably in 2021. He is another versatile player but predominantly plays guard.

Second-year C Josh Myers is looking to have a bounce-back season after starting and playing in a total of just six games due to injury. The coaching staff really likes him as a young player.

At RG, second-year player Royce Newman, who started in 16 of 17 games as a rookie last year, will look to build off of a strong campaign. Finally, after the loss of Billy Turner in free agency, T Yosh Nijman, who slid in for Bakhtiari, Jenkins, and Turner last season has the inside track at starting at RT. He started eight games last year.

“I don’t worry about that group, they’ve been coached so well over the years,” QB Aaron Rodgers said about the offensive line after Day 1 of mandatory minicamp.

The Packers have an elite offensive line. They have young talent, great depth and experienced veterans, who have become exactly that in a short time.

Remember, Myers, Newman, Runyan, and Nijman have all gotten plenty of starting experience in their few, short years in the league. Bakhtiari and Jenkins are the stars on the line that will both finally be fully healthy again.

Then, they have the youth they just added in the draft. Last year was one of the more outstanding performances I have seen from a collective offensive line. This line faced the likes of TJ Watt, Myles Garrett, Aaron Donald, Robert Quinn, Chandler Jones, Nick Bosa, Chase Young, and others.

With all the injuries and lineup changes, this line allowed the seventh-fewest amount of sacks.

Now, they add more talent, quickness, and they get their stars back. Like Rodgers said, there is no need to worry about the line. They have performed at an elite level over the years. They will again this year.