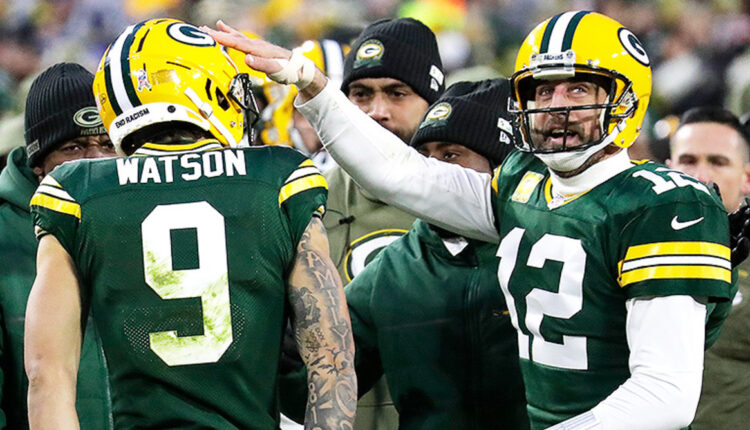 To realize them, they’ll have to beat the best team in the NFC when they travel to Philadelphia to face the Eagles on “Sunday Night Football.”

The Packers appeared to have turned the corner two weeks ago when they topped the Cowboys in overtime, but any goodwill disappeared with a 10-point loss to the Titans on “Thursday Night Football.” They were out-gained 408-271 and trailed for all but the first four-plus scoreless minutes of the game.

The Eagles, meanwhile, had to score 14 fourth-quarter points to come back and beat the Colts. That was still a welcomed result after their first loss of the season, two weeks ago to Washington. But two of their three lowest yardage outputs of the season have come in the last two weeks, and a combined six giveaways haven’t helped either.

Perhaps Green Bay is meeting Philadelphia at the right time, but the Packers still have an uphill battle even if they can score a road win. Green Bay enters the week two games out of the playoffs, and there are three other teams between them and the No. 7 seed commanders.

1. Eagles’ pass rush vs. Packers’ offensive line
Philadelphia’s key to success this season has been a fearsome pass rush, which was supplemented at the trade deadline with the addition of Robert Quinn. The former Bear is still looking for his first sack with the Eagles, but he’s valuable depth alongside Haason Reddick (7.5 sacks), Javon Hargrave (7.0), Brandon Graham (4.0), and Josh Sweat (3.5).

With so many threats, the Eagles rank second in the NFL with a 53 percent pass rush win rate. However, they’ll perhaps have their toughest matchup to date yet against a Packers line that ranks fifth with a 66 percent pass block win rate.

Green Bay has had to deal with injuries all season but remains one of the better units. Left tackle David Bakhtiari has been in and out of the lineup — he’s practicing but dealing with a knee injury — but ranks as the top pass-blocking tackle (95 percent PBWR) when healthy. Josh Myers also ranks fifth among centers (96 percent), and Yosh Nijman is sixth among tackles (94 percent).

2. Can the Packers slow Philadelphia’s rushing attack?
The Eagles don’t have the most efficient running attack (4.3 ypc), but with their volume (32.9 attempts per game, third in the NFL), it works just fine. And they should have a chance to feast this Thanksgiving weekend against a Packers front as porous as a cheesehead hat.

Rashan Gary is a premier run-stopper off the edge but is on injured reserve with a torn ACL. And with linebackers De’Vondre Campbell (knee) and Quay Walker (shoulder) banged up, things won’t get any easier.

If there’s any silver lining for the Packers, it’s that they’ve done a good job of stifling running quarterbacks this season. Over 11 games, they’ve allowed 40 rushes for just 112 yards and one score, so Philadelphia may have to lean more on backup running backs after giving all but three carries to Miles Sanders and Jalen Hurts last week.

3. Does Aaron Rodgers finally have a new favorite receiver?
The loss of Davante Adams over the offseason doesn’t fully explain Aaron Rodgers’ drop-off this season — Occam’s razor says it’s probably his age — but it certainly hasn’t helped. Allen Lazard has been consistent but is really more of a No. 3 receivers or no. 2 on a good day than a true No. 1.

But in recent weeks, a new weapon has emerged for Rodgers: second-round rookie Christian Watson. The former North Dakota State Bison standout struggled with drops (10.7 percent) and health early in the campaign but is starting to justify Green Bay’s early selection.

Through Week 9, Watson had 10 receptions for 88 yards and no scores. In the two games since, he has eight receptions for 155 yards and five touchdowns. He has the size (6-4) and speed (4.36 sec. 40-yard dash) to become a dominant receiver if he can put it all together.

The question becomes how he will adjust when defenses give him more attention. The Eagles have two excellent cornerbacks in Darius Slay and James Bradberry and won’t be underestimating Watson this time.

The Packers seem equipped to stop the Eagles’ passing attack — Jaire Alexander shut down AJ Brown when he was on the Titans in 2020 — but it’s hard to see them slowing the ground game. With that major disadvantage, it will take a vintage game from Rodgers to overcome a dominant Philly defense. And those games are getting increasingly rare.

*Price as of publication.