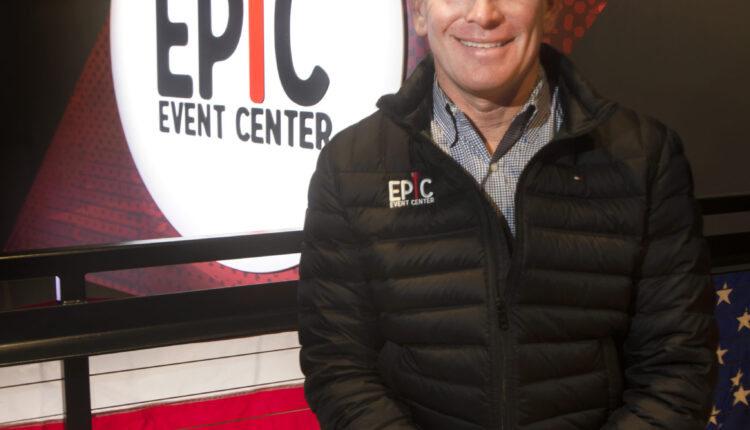 BY Daniel KRAMER
MANAGING EDITOR
Mark Skogen walked into the Epic Event Center on a cold Friday afternoon with his phone in his hand.
His gray hair is cropped close on the sides, longer on top and combed back.

If it weren’t for the Epic Event Center logo on his black down jacket, Skogen could easily be mistaken for a band member in one of the many acts he books.

At 53, he is trim and his Hollywood good looks don’t quite pair with the image of a third-generation grocer who runs 40 Festival Foods stores across the state with 7,500 employees.

Mark Skogen says music is “Magic to the ears that affects your mood” and lists AC/DC and Metallica as two of his favorites. Daniel Kramer Photo

Born in Onalaska, Wis. In 1969, Skogen was a standout basketball player at Onalaska High School where he helped the Hilltoppers win a state championship as a senior in 1988.

From there he went to Viterbo University in La Crosse where he played basketball and baseball.

In basketball, he was the most prolific scorer in Viterbo history — up to that point — and as a senior was named conference player of the year.

Skogen was inducted into the V-Hawks Wall of Fame six years after graduating and is one of two players to have his jersey number retired. “We opened right in the pandemic so the first shows were seated in pods,” he said. “So, you know, a very different experience, but nothing else was going on.”

Skogen went on to say that he’s always liked music and spent a lot of time with friends going to shows all around the country.

“And we felt like Green Bay could use a facility similar to what we were seeing: 2,000 capacity kind of room, and after traveling the country quite a bit for five or six years, we could see what was good in a venue and what wasn’t ‘t good,” he said. “So, when we had the chance to build our own, we just went down that list of things that we liked and made sure to avoid the things we didn’t like and I think we pretty much hit on everything we were looking for. ”

EPIC has two green rooms for performers to hang out in before and after the shows; There is a half-court basketball gym for them to play around, and there are laundry facilities so they can be washing and drying their clothes while working on their jump shot. Moving forward, Skogen is putting in a skate park next door.

“There are a lot of bands that have guys that love to skate,” he said. “So, you know, we’ve got the gym, we’ve got the weight room, we’ve got a great greenroom setup, and now they’re going to be able to go over and skate as well. And you know, those guys living on the road — guys and ladies, — it can get darn boring. So when they have something to play around and do, it just makes it a better experience for them.”

Skogen jokes that his love of music might come from the fact that he can’t play an instrument, sing or dance.

“But, you know, music just kind of takes you away from stress,” he said. “It also makes you happier when things are going well and it’s just kind of a little magic. Magic to the ears that affects your mood.” A few of Mark Skogen’s signed guitars grace a wall in his suite overlooking the stage at the EPIC Event Center. Daniel Kramer Photo

Growing up in Onalaska, he said two of his favorite bands were AC/DC and Metallica.

Speaking of Metallica, the heavy metal rockers were the last band to play at the Carlton West Theater before it burned down in 1986.

In the year and a half that EPIC has been open, the 2,100-capacity venue has just recently hosted Paul Daniel “Ace” Frehley, best known as the original lead guitarist and co-founding member of Kiss. Interestingly, the first Festival Foods in Green Bay was built upon the site of the Carlton West.

“The soil was so bad because the ash from the Carlton was still underground and so we had to excavate that,” Skogen said.

The Rockers have gone through a series of name changes recently, with the current handle clearly reflecting Skogen’s love of music.

“It’s pretty cool that they ended up being next to each other,” he said. “That wasn’t on purpose, but it’s neat that it feels like they’re in the same complex. That facility is really cool. And it can be used for a lot of things, not just baseball.”

Skogen doesn’t own the stadium, but he does operate the facility.

So the baseball team plays for three or four months and then they rent it out.

He said they can do larger concerts there, as well.

“I’ve always loved baseball,” he said. “I’m a big St. Louis Cardinals fan. (My family) spent summers in St. Louis, and we had this opportunity here in town because the previous owners… were looking to sell… I didn’t go really looking for that. But when it fell to us, I felt like wow, this will be fun. You know, this is something I have a passion for. So it’s kind of like two hobby businesses really and they’re separate from the Festival company. It’s my own personal thing. So it’s, you know, some people collect cars and I get to enjoy a couple of things that I love.”