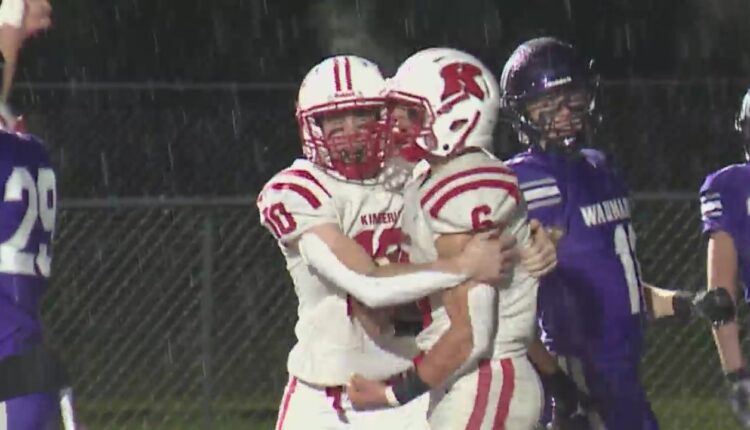 (WFRV) – In the final home games of the high school football postseason, Northeast Wisconsin teams braved a state-wide rainstorm to provide plenty of action on the gridiron, including a few instances of payback and a thrilling night of playoff games.

Click the video for highlights and read about each game below.

17 Bay Port, 10 Appleton North: Cole Bensen hit Collin Gehl for a touchdown pass on the opening drive and Bay Port never surrendered the lead, despite a spirited comeback from Appleton North after trailing 17-0 through three quarters.

Kimberly 31, Waunakee 16: The Papermakers ousted the defending state champions of Division 2, handing Waunakee his first loss in blowout fashion. Kimberly led 31-3 in the fourth quarter and will now face Bay Port in Level 4.

38 West De Pere, 6 River Falls: Najeh Mitchell scored two first half touchdowns as the Phantoms took a 24-0 lead into the locker room and never looked back.

Kaukauna 41, Homestead 13: The Ghosts led 13-7 at halftime and exploded in the third quarter, boatracing Homestead off its home field to set up a rematch with West De Pere in Level 4.

21 West Salem, 14 Notre Dame: The Tritons’ run as a 7-seed came to an end with a valiant effort against top-seeded West Salem. The teams were tied at 14 in the fourth quarter.

Freedom 13, Little Chute 7: Carter Kriewaldt scored two second half touchdowns to lead the Irish to a come-from-behind win – and revenge for the County Road N sign. Freedom will face Columbus in level 4.

Two Rivers 35, Racine St. Catherine’s 6: Justin Klinkner tossed two first quarter touchdowns as the Raiders raced out to a 21-0 halftime lead and blitzed another opponent on the road. Two Rivers will face Catholic Memorial in Level 4.

21 St. Mary’s Springs, 20 Coleman: The battle between the top two teams in Division 6 lived up to the hype, with JT Koenigs scoring the game-winning touchdown with under a minute left.