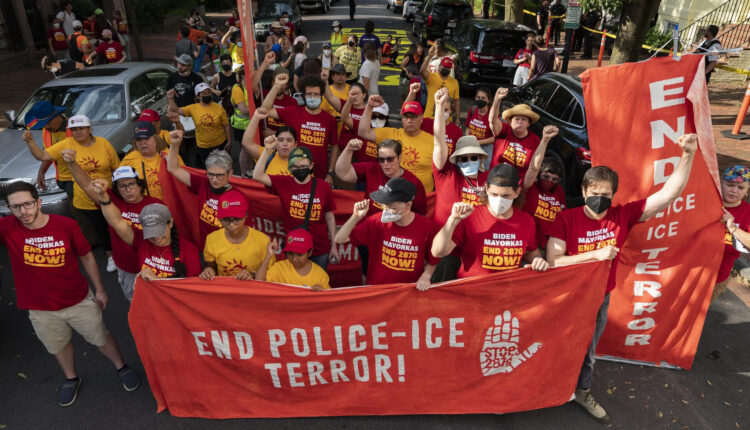 Over a hundred immigrant rights activists staged an action outside the home of  Department of Homeland Security (DHS) Secretary Alejandro Mayorkas early Monday morning to send a message to Mayorkas and President Joe Biden to stop deputizing local police for immigration enforcement.

“We are using our constitutional rights for free speech and assembly and taking non-violent civil disobedience action,” said Christine Neumann-Ortiz, executive director of Voces de la Frontera. Activists from Voces and Never Again Action marched the streets towards Mayorkas’ house, where 25 demonstrators blocked the stairway outside of his home with banners reading “End Police-ICE terror: No 287(g).” Other activists painted the words “end 287(g)” on the street while protesters took to the sidewalk singing and giving testimonials. One protester was arrested during the actions, and then later released.

“Protest and civil disobedience have been two important tools for social change” Neumann-Ortiz told Wisconsin Examiner. “What it does is it interrupts business as usual. And we have to interrupt business as usual, because otherwise we are often invisible.”

“We are forced to do this because Biden and Mayorkas have not fulfilled their promise to end this racist and xenophobic program,” said Neumann-Ortiz. “As an administration that is supposedly standing up against white supremacy and racism, they must prove it by ending the 287(g) program that legalizes racial profiling.”

The program became particularly notorious under former President Donald Trump, who campaigned on a crackdown of undocumented immigrants and migration across the southern border.

Under the 287(g) local law enforcement, such as sheriff and police departments, deputize individual officers to enforce federal immigration law. This has fueled fears by immigrant workers that they could be arrested even during a routine traffic stop while going to work, the store, or dropping children off at school. That last example occurred in 2019, where Milwaukee officers assisted Immigration agents in the arrest of a man in front of his family. He was released in December 2019 after spending months inside an immigration detention center.

In 2017, the 287(g) program was adopted in the counties of Waukesha, Mantiwoc, Sheboygan, Marquette, Brown, Fond du Lac, Lafayette, and Waushara. Local police departments also either expressed an interest in enforcing immigration law, or were documented conducting arrests like in Milwaukee. 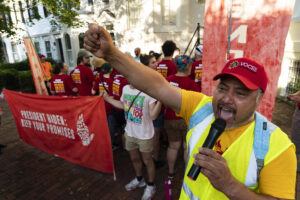 During the recent rash of Supreme Court decisions, the Biden administration’s enforcement priorities for undocumented immigrants were removed. Now, rather than focusing on individuals who commit serious crimes, the door has opened to all undocumented immigrants. During their demonstration, Voces de la Frontera and Never Again Action decried the continuation of deportation policies under Biden as hypocritical.

Advocates for the 11 million undocumented immigrants in the U.S. said mmigrant communities rallied behind Biden and other Democrats during the 2020 election. DHS Secretary Mayorkas is a Latino immigrant and the son of Holocaust survivors.

“President Biden and Secretary Mayorkas are here because of us,” said Eduardo Perea, a Voces member and immigrant worker from Milwaukee,”because it was us and our children who mobilized the votes that elected them into their positions. President Biden has the power, and the obligation to end 287(g) now, once and for all. Of all the 146 current 287(g) contracts he’s only removed one.”

Karina Sanchez, another Voces member and a Green Bay resident, was part of a delegation in 2020 of essential workers who met with Kamala Harris when she was the vice presidential nominee.

“Harris gave her word to us in these meetings that she and Biden would end the 287(g) program if elected,” Sanchez said during the Monday action, “knowing that Wisconsin votes would be the difference between winning or losing the general election. Based on this promise and others made on the campaign trail, I helped organize voters with Voces de la Frontera Action. We mobilized, and Biden won. That was two years ago, and it’s past time for Biden to fulfill his promise. It’s time for President Biden to use his executive action power and end the 287(g) program once and for all.”

The sentiment was echoed by Jessie Thornton, an activist with Never Again Action. “You tell us you will work for us and our rights to get our families who can vote to vote for you,” said Thornton. “And then when they say immigration is too controversial, you do nothing. Three months from now, [Democratic candidates] will make more promises. But we will not believe you until you deliver on the promises you made two years ago.” 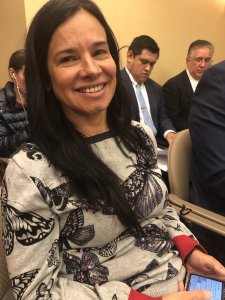 Patrick Juley, a Hatian immigrant who  experienced being arrested under the 287(g) program, also testified. “Not only is the administration neglecting the basic dignity and humanity of immigrants across the country, the entire milk industry in Wisconsin depends on immigrant labor,” said Juley.

Neumann-Ortiz said she understands the anger and resentment shadowing the failure of immigration reforms to pass. Nevertheless, she also said that  bridges haven’t been completely burned.

“What people need to see is that we have an administration that is really championing the rights of immigrants and refugees,” she told Wisconsin Examiner, “and is really pushing back against the kind of scare tactics and hatred that the far right, Republicans, that they run on, both in rhetoric, and action.”

Neumann-Ortiz stressed that elections matter, and now isn’t the time to wilt. “However, I think it is a mistake not to hold the Democrats accountable for being strong champions for immigrant rights and refugee rights,” she said. The Monday action, Neumann-Ortiz said, was meant to send the message that 287(g) could end immediately if Biden ordered it. “It’s a necessity for us to push back against far right extremism, but at the same time hold Democrats accountable for being strong champions for the solutions that we need. And to act boldly.”