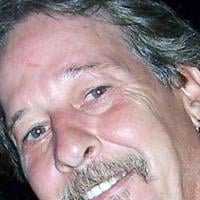 Born on December 30, 1947, in Kenosha he was the son of the late John and Shirley (Kulik) Kressel.

He was educated in the schools of Kenosha and was a graduate of Tremper High School. Shortly after high school, Jon was drafted into the US Army and served in Vietnam until being honorably discharged in October 1969.

Jon worked for many years with his father in their construction/concrete business. He was later employed by the City of Kenosha in the Inspection Department, retiring in 2008.

He had an artistic mind and loved to air brush, and more recently, play music with like-minded friends on Sundays at Union Park Tavern. For many years he and Marsha would take their motorcycles out for a leisurely ride or participate in weekend poker runs. Jon was a regular customer at The Coffee Pot even before it was The Coffee Pot. He never met a stranger he didn’t like and loved to talk to anybody that would listen to him.

He was preceded in death by his parents; one son, Joshua and a brother, Jerry Kressel.

A Celebration of Life will be announced at a later date.

We will love you and miss you forever Johnny K. Please give Josh a big hug from us.

‘An Arm and a Leg’: The Year in Review, From Prenatal Testing to Insulin Pricing