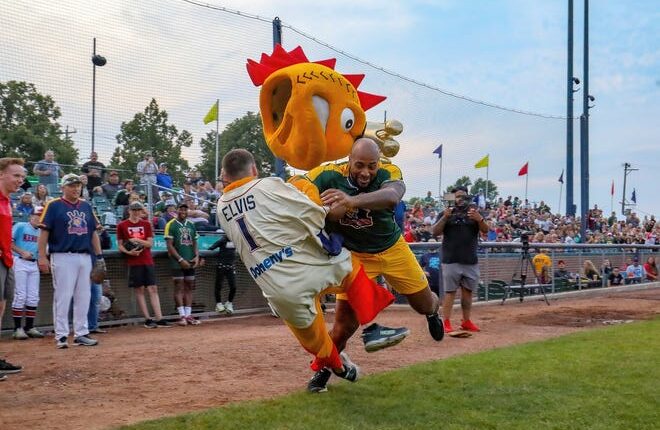 Trey Meier, a 20-year-old cross country runner at the University of Wisconsin Milwaukee, can now feel the pain of NFL defensive backs. But at least they can see AJ Dillon coming.

Meier was dressed as “Elvis” the Kenosha Kingfish mascot when he got run over by Dillon, the popular Packers running back, during a celebrity softball game Saturday.

“It’s hard to see out of that costume, it’s hard to move,” Meier said.

“It happened all so almost, but what I’m thinking in that moment, I’m just like, ‘I hope he kind of gently pushes me over or something like that.’

“I still have this snapshot in my mind. I can’t see straight, so out of the corner of my eye, I just see AJ Dillon barreling at me.”

The “Oklahoma Drill” simply calls for the two players to try to take the other down. Meier did not win.

His mascot head went flying off in the process, leaving him scurrying to get it back and retain the anonymity that’s sacrosanct for mascots.

“It was kind of a rough hit; I got the wind knocked out of me, but I got right back up after,” Meier said. “He’s nicknamed ‘Quadzilla’ for a reason.”

Meier is a Kenosha Indian Trail High School graduate now in his second year working for the Kingfish — a Northwoods League squad that plays a summer schedule with wooden bats and rosters of college players.

He insists he’s totally fine in the aftermath, though Dillon did apologize for the severity of the hit and snapped a photo with Meier afterwards.

Meier didn’t know he was going to perform the one-on-one drill until he was informed of the task at the stadium, but says he wasn’t thinking too much about the showdown during the night, which also featured Packers quarterback Jordan love Elvis keeps a pretty busy schedule, from a zip-lining excursion to interacting with fans.

More:Packers running back AJ Dillon finds inspiration close to home on campaign to feed kids this summer and give back to his ‘home’

More:AJ Dillon gets key to Door County for being peninsula’s biggest fan

“I didn’t really think much of it at first; we do promos and events like that all the time,” he said. “I’ve gotten tackled on the field before as a type of entertainment thing. … But I didn’t get tackled that hard, I’ll just say that.”

Meier figures the moment wouldn’t have gone viral if his head had stayed attached. (The strap holding his head in place was perhaps too loose, he said.)

When Bleacher Report picked up the video of the hit and recirculated it, he and his Kingfish colleagues were in the office. They realized it would quickly rise to the national consciousness.

“I went to the gym (Monday) and I got back and there were four or five text messages from different media outlets; it’s insane,” he said.

Meier, a Packers fan, said he occasionally handles marketing responsibilities for the Kingfish but has mostly worked as Elvis. He’s interested in working in sports and was looking for a summer job last year, finding one at Simmons Field, just five minutes away from his home.

“It’s great baseball, but the reason you come to the Northwoods League is the entertainment,” he said. “The Elvis zip line, the kids zone, the food, the atmosphere. It’s an all-around atmosphere. We bring out a lot of people for our weekend games.”

Meier, who qualified for the WIAA state CC meet three times and the state track and field meet in the 3,200 meters, didn’t run last year at UWM because of a foot injury but expects to be back in the fall.

COVID-19 cases more than double in Alabama – The Madison Record

A pair of special teams standouts