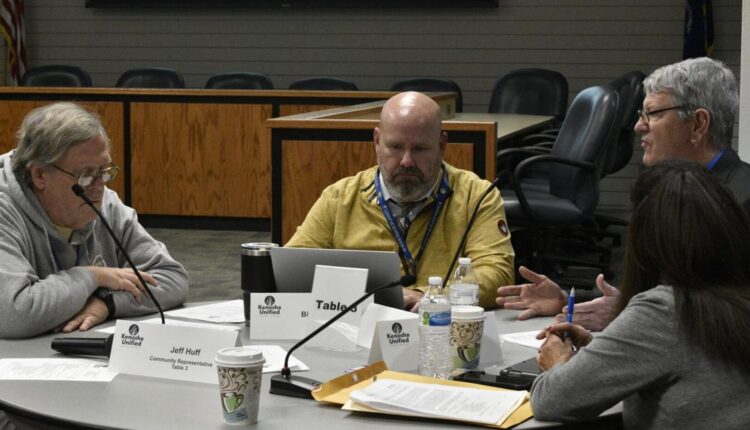 Unlike other Kenosha Unified School District Personnel Standing Committee meetings, Tuesday night’s meeting was packed with community members who watched the committee discuss School Board Policy 1510, which pertains to advertising and promotions.

At a December school board meeting, students, staff and community members spoke out against the agenda item offered for discussion.

Board member Kris Schmaling asked: “To determine whether or not there is support for providing direction to administration regarding updates that would further restrict classroom displays beyond advertisements to include items such as flags and other political items.”

In a Facebook post from Schmaling’s school board campaign page, she raised the issue: “When it was clear that some classrooms had controversial flags and posters that were on display.”

She added: “We also need to move towards focusing on lessons within the classroom that fosters non-controversial topics and when appropriate, and they are polarized, they must be within the content of the curriculum subject, giving our students the ‘how’ to think not ‘What’ to think, when teaching subjects that lean toward this type of dialog.”

Each group was asked to identify examples and non-examples of the following points laid out in the policy: “That pertains to products or services that are unlawful or prohibited in school, such as alcoholic beverages, tobacco or other harmful substances;” “That are inappropriate for the intended age group, such as those related to the promotion of sexual activity;” “Political in nature;” “Or inconsistent with the district mission or educational objectives.”

The groups were then asked to reach consensus on examples and non-examples, and identify policy changes if necessary.

When discussion concluded, some groups felt as though the policy was not the right one to address the concern.

“What we’re mostly here to discuss is the LGBTQ pride flags or something related to Black Lives Matter and we also kind of felt this policy is not the most adequately equipped to tackle that specific issue,” said Student Representative Alexa Sanchez-Nava. “It’s not really related that well in the actual verbiage of the policy. There’s very minimal parts of the policy that could actually apply to what we’re discussing.”

Others said they felt the policy needs to be examined regardless.

“At our table, we definitely had consensus that the policy needs to be looked at no matter what,” said Kenosha Unified Chief Communications Officer Tanya Ruder. “Especially if we are to use this policy to (determine) what is displayed in a classroom, we need to come to a consensus about what ‘political’ means and how to define that.”

Ruder continued to say the group had consensus on showing students they feel supported in the classroom, but did not come to a consensus on what that looks like.

Other groups completely felt that items, such as pride flags and Black Lives Matter flags, were not political in nature.

“The group did not see social justice as political,” said Kenosha Unified Chief of School Leadership Bill Haithcock. “It was consensus that political campaign materials do not belong in schools.”

Haithcock said the group had consensus that politicians should not leave campaign materials in schools and teachers shouldn’t be wearing campaign pins.

The feedback from the groups will be shared with the school board, and the next steps will be determined after that time, according to Kenosha Unified Superintendent Jeffrey Weiss.