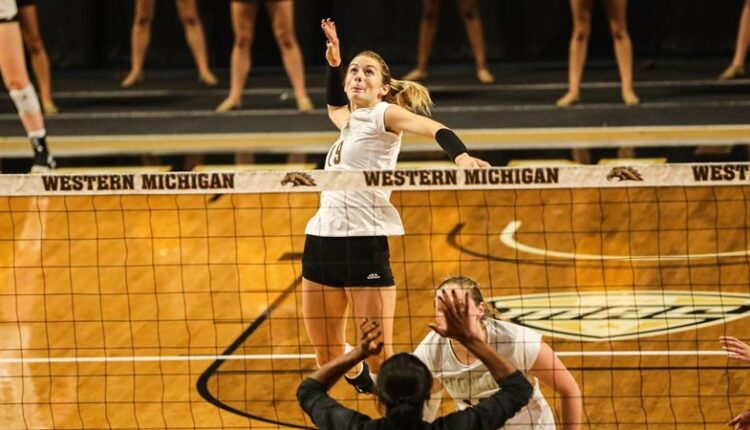 BOULDER, Colo. – Western Michigan senior outside hitter Maggie King recorded her 1,000th career kill in the first set, and led the way with 11 kills as the Broncos swept Green Bay 3-0 on Saturday at the Buffs Invitational.

Joining King in double-figures was freshman Amanda Glanton, who totaled a career-high 10 kills on a blistering .571 hitting percentage. Logan Case recorded her first double-double of the season for the Broncos, as she handed out 41 assists and posted 11 digs. Andelyn Simkins paced WMU with 13 digs for the afternoon, while Glanton tallied a team-high four blocks.

Following the match, King and Case were both named to the Buffs Invitational All-Tournament Team after helping Western Michigan to a 2-1 record for the weekend. King registered a double-double (13 kills, 13 digs) in Friday’s win over Denver, and had double-digit kills in each of WMU’s three contests. For the weekend, she totaled 36 kills, for an average of 3.27/set. The senior collected 22 digs (2.00/set) and also added seven service aces (0.64/set). Case handed out more than 40 assists in all three contests and racked up a total of 131 helpers (11.91/set) for the weekend. The junior also pitched in 27 digs (2.45/set).

In the first frame, Madison Merz notched a kill to even the score at 11-11 and begin a 9-2 surge which put Western Michigan in front, 19-13. The Phoenix reeled off four straight points to trim the margin to 23-21, but a kill and service ace by King sealed the opening set for the Broncos.

After a 4-0 WMU run wiped out an early Green Bay lead and knotted the score at 8-8, neither team could create more than two points of separation until late in the second set. With the frame deadlocked at 18-18, Western Michigan got consecutive kills from Glanton, Case and King which sparked a 7-2 run to close out the set and give the Broncos a 2-0 edge in the match.

The Broncos and Phoenix went back and forth for much of the third set as well, with a total of seven ties in the frame. With Green Bay leading 15-13, Western Michigan ripped off seven consecutive points and nine of the next 10 to seize a 22-16 advantage and put the contest away.

Western Michigan returns home on Friday night for its home opener against Wright State. First serve is scheduled for 6 pm at University Arena.

Something Brewing with Milwaukee and Boston