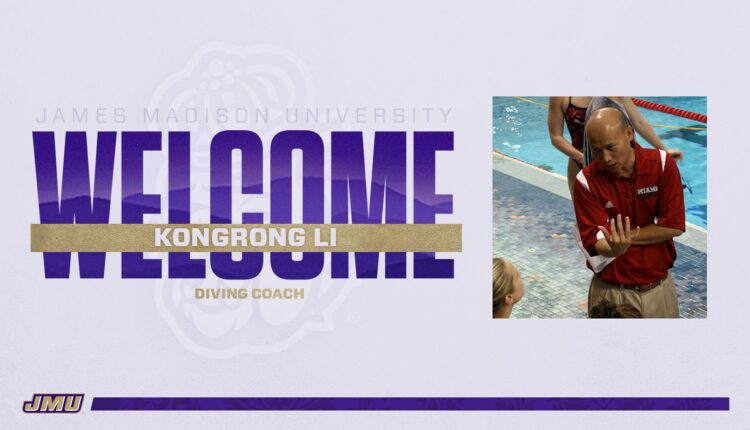 “I am so excited to have KR join our swimming & diving family,” said Pedersen. “He has been successful at every level he has coached, including collegiately and internationally. In addition to his amazing results and coaching skill set, he was also an ideal fit within our program and JMU’s culture. He is going to do amazing things at JMU and I can’t wait for the new season to arrive with him at the helm of our divers.”

Li joins the Dukes after a season spent at Illinois under Sue Novitsky, the winningest coach in program history. In his one season in Champagne, Li helped four Fighting Illini advance to the NCAA Zone Championships.

“I’m happy to join the JMU swimming and diving program and I am looking forward to a great season with this team,” Li said.

Prior to his brief stint at Illinois, Li spent 13 years at Miami University as the head diving coach for both the men’s and women’s programs. During his time in Ohio, the RedHawks saw individual success at both the national and conference level. At the national level, Miami (OH) had seven All-American selections and three second place finishes at the NCAA National Championships under Li’s tutelage.

While competing in the Mid-American Conference, the RedHawks brought home 10 Diver of the Year honors, with two separate five-year stretches of award winners. Li himself won four Diving Coach of the Year awards during his tenure, as he helped Miami (OH) win three team titles in 2009, 2013 and 2019.

While at Miami (OH), Li also served as USA Diving Junior Head Coach Consultant from 2013-14, assisting the coaches with training plans and programs, and was the assistant team leader for Team USA at the 2014 FINA Diving World Cup and the team leaders in 2018.

His work with Team USA culminates nearly 30 years of international coaching for Li. Before entering the collegiate ranks, Li served as Co-Head Diving Coach at the US Elite Diving Academy from 2001-07. He served as the head coach for Team USA at the 2004 Junior World Championships, and had a plethora of top-three team finishes at the US National Championships during his time with the academy.

Before working with Team USA, he spent six years (1996-2001) as the diving coach at Australia Institute of Sports, the country’s elite diving program. While working at AIS, he coached seven Olympians including Matthew Mitcham who won gold at the 2008 Beijing Olympics.

Li’s coaching career began with the Nanning Diving Team in Guanxi, China where he served as the head coach from 1990-95.