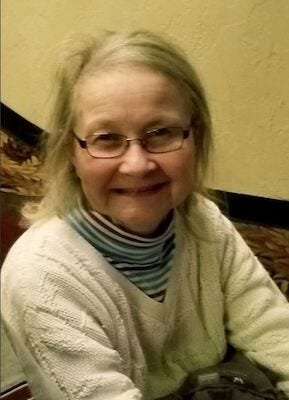 Korrin “Rin” Moede (née Jack) passed away on December 22, 2022 at the age of 71. She was a lifelong lover of art, books, animals, ballet, and the opera. She also enjoyed collecting weird obituaries she came across in the newspaper, and kept an album full of them that she could be found chuckling over quite often. Her sense of humor was legendary, and she will dearly be missed. She also hated gramar and spelling mistake’s. Korrin was born in November 1951 to Vernon and Janice Jack of Appleton. She was a 1969 graduate of Appleton East high school, and a 1973 graduate of UW-Oshkosh where she received a bachelor of science degree with a major in English and minor in library science, with honors. Korrin married Jerry Moede in 1972, and they celebrated their 50th anniversary this past November. They enjoyed many super neat things together over the years including raising llamas, taking sunset boat rides on Shay Lake, and spending time with their children (Korrin’s favorite daughter, Erin (Chris) Cooke, and the other child, Adam (Heather) Moede) . She is also survived by her lovely granddaughters, Naomi “Omerd,” Aria, and Chloe, her beloved baby brother Tim (Tammy) Jack of Appleton, and her brother-in-law Dan Moede of Keshena. After college, Korrin and Jerry moved to Blair, Wisconsin, where she was an English teacher at Taylor High School for two years. Korrin and Jerry moved to Suring in 1987, and continue to reside in the area. In 1993 Korrin became the librarian of the Suring Area Public Library, a position she loved and held for over a decade. She also worked at the Lakes County Public Library in Lakewood for several years until her retirement. Throughout all the places that Korrin lived and worked, she formed many lifelong friendships. We give a special thanks to Cindy & Gary, Kate, Kim & Tony, Linda, LouAnne, Pam, Sidney, and so many others for bringing so much love, light, and laughter into Korrin’s life. The family would also like to thank Unity Hospice (the Sarahs and Dustin especially), as well as Pastor Stoll and the congregation of Tabor Lutheran Church in Mountain for their unparalleled care and support. A memorial service for Korrin will be held at Tabor Lutheran Church in Mountain on April 22, 2023, beginning at 11:00 am In lieu of flowers, the family asks that donations be made to the Lakes County Public Library or Tabor Lutheran Church. Gruetzmacher Funeral Home in Suring is assisting the family with arrangements. Online condolences can be expressed at www.gruetzmacherfuneralhome.com.

Conservation groups complain of being shut out by conservation…