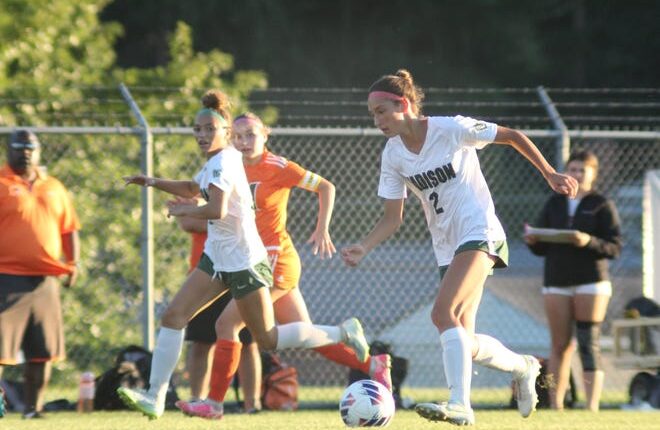 In a matchup between OCC (Ohio Cardinal Conference) adversaries, Madison took charge early and left no doubt in their 7-0 win away against an improved Mansfield Senior. Seven different players scored for the Lady Rams on the evening. Here’s what stood out:

Madison used every inch of the pitch to their advantage

Soccer, probably more than any other team sport, is a game where the side with the ball tries to find the open spaces and areas on the field and attempts to capitalize on it, by either methodically breaking an opponent down or manipulating the defense in some fashion.

Well, Madison found those spaces and utilized it to the fullest Thursday evening. It was the Lady Rams ability to combine with one another that set off a string of goals and had the Mansfield Senior defense on their heels.

Take freshman forward Jada Neal, who in the first half constantly touched the ball in the open spaces in the middle third and made a habit attracting the defense as she dribbled up the middle or near the wide areas on the right side, where she operated on . Even her goal, was her finding the space.

With the Lady Tygers backline playing somewhat between the box and the middle third area, it was Neal who made a run behind the defense and received a lovely ball over the top by midfielder Lilly Neal, which Jada finished pass the goalkeeper.

Midfielder Kyerstin Swigart occupied the wide areas nicely, who scored a goal and had an assist. Lilly Neal, who had the ball at her feet a tone throughout the match, continually made things happen in the middle third of the pitch, finding runners ahead in free areas or when the opportunity presented itself scoring from outside the penalty box. Striker Jennaca Tatum stayed involved in the link play, dropping deep at times to get the ball or just being a presence around the box. Kendyll Kershner scored late, beating a defender to a ball played behind the defense on a nice strike.

“I liked that we had multiple people score again, like we did against Ashland,” said Madison coach Zach Huff. “We got the win in conference play. Senior high, there no slouch anymore. It’s good competition. If you don’t come to play and if you don’t find the back of the net, then it’s gonna be a ball game. “

Then there was midfielder Natalee Back, who really kept the ball moving for Madison all match long. Substantially playing as a holding midfielder for most of the match, Back’s play in the central area of ​​the pitch dictated the tempo of the match. Working in the deeper areas, back continuously found teammates with short passes, passes near the flanks, balls played in behind the defense, passes between the lines and overall just spreaded the wealth.

“I liked that we played more technical, instead of just like shove it down and try to go score right off the bat,” said Back. “We tried to play slower and focus more on our ball skills in this game.”

For the game, Back would tally one assist (a pass on a corner kick to Tatum inside the box during the first half) and a goal (a header near the far post received from an on the money cross from Swigart).

“I like to try and create plays and try to give my teammates opportunities, especially on top and the chances I get I like to shoot and try and score for my team,” said Back.

Madison’s combination play was the key in the match, as everyone was heavily involved in the play. After a 0-2-1 start in their first three games, Madison have now won two in a row by outscoring their opponents in the last two games 12-0.

Madison’s defense is coming around

Madison kept a clean sheet for the second match in a row behind the stern play of Taylor Tucker, Mylah Davis and Rudy Moore.

Throughout the match, Davis stayed tight on the hips of multiple Lady Tyger forwards, while Moore covered her area well and Tucker made key clearances, while also scored on a penalty kick in the first half.

Whether lined up in a back four or a back three, Madison looked pretty comfortable.

On what’s been the difference in the last two outings for his team, Huff said, “The girls have assumed some of their roles and figured out what they need to do.”