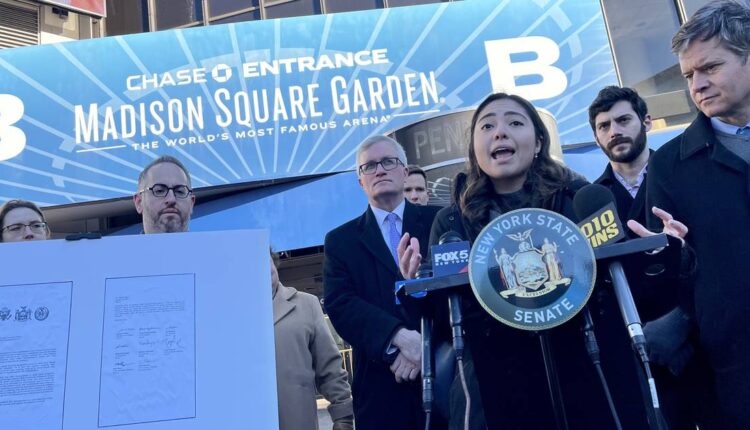 Local electeds are crying foul on Madison Square Garden’s ban on certain lawyers — and the use of facial recognition technology to impose it.

Manhattan state Sen. Brad Hoylman-Sigal and a bevy of pols gathered outside The Garden on Sunday to demand its controversial CEO James Dolan end the practices.

“Over the last six months, we have seen extraordinary, outrageous and alarming use of biometric technology,” said Hoylman-Sigal, a Democrat.

Brad Hoylman-Sigal speaks at the press facial recognition press conference on Sunday, Jan. 15, 2023 at 1pm outside Madison Square Garden. To the left is a large copy of the letter addressed to James Dolan. (Rebecca White/for New York Daily News)

On issue is a recent series of four fan ejections from the Garden and Radio City Music Hall, which Dolan also runs as part of MSG Entertainment.

Earlier this month, MSG staff unceremoniously gave Benjamin Pinczewski the boot from a Rangers game after he was detected by facial recognition tech, Hoylman said. Like two others recently kicked out of the Garden and a woman ejected from Radio City Music Hall, Pinczewski is employed by a law firm involved in litigation against MSG, though he’s not personally working on the case.

“What Jim Dolan is doing is creating an atmosphere … of retaliation,” said Manhattan Assemblyman Tony Simone, a Democrat. “He shouldn’t get away with this.”

New York Knicks owner James Dolan watches during the second half of the team’s NBA basketball game against the Detroit Pistons on Friday, Oct. 21, 2022, in New York. The Knicks won 130-106. (Adam Hunger/AP)

MSG showed no signs of backing down on Sunday.

“While we understand this policy is disappointing to some, we cannot ignore the fact that litigation creates an inherently adversarial environment,” the organization said in a statement. “All impacted attorneys were notified of the policy.”

It also defended its use of facial recognition tech as “a useful tool used widely throughout the country, including the sports and entertainment industry.”

“This technology is biased, it is error-prone and it is a threat to every New Yorker,” he said alongside the elected. “It cannot be tolerated when the rich and powerful use surveillance technology to use our own images as a weapon against us.”

MSG insisted it doesn’t keep images of people except for individuals including the banned lawyers and others whose “previous misconduct” makes them a “security risk.”

The group includes Kelly Conlin, who was kicked out of Radio City Music Hall while part of a Girl Scout trip with her daughter to see the Rockettes perform Nov. 27, according to NBC New York.

Similarly to the other incidents, guards confronted her soon after she entered and ordered her out.

She’s an associate at the New Jersey-based firm Davis, Saperstein and Solomon, which is suing a restaurant that’s part of MSG Entertainment, though she isn’t working on the case, according to NBC.

Long Island lawyer Alexis Majano was kicked out of a Rockettes show at the Garden on Nov. 5 under similar circumstances. He reportedly works for the firm Sahn Ward Braff Koblenz, which sued MSG on behalf of a man who had an accident during a Billy Joel concert. Majano says he wasn’t part of that case.

In the first known incident of this kind, lawyer Barbara Hart was ejected from a Brandi Carlile concert at the Garden on Oct. 22, telling Rolling Stone that her firm is involved in a suit against MSG. She was reportedly fingered using facial recognition tech, too.

“What I think is exceptionally frightening about the story is right now we just think it’s Dolan’s locations,” the Manhattan Democrat said Sunday. “But who knows how many other companies might go, ‘I like this idea. Let’s do this too’?”