Marie Goff Shares What it is Like to be a Centenarian | 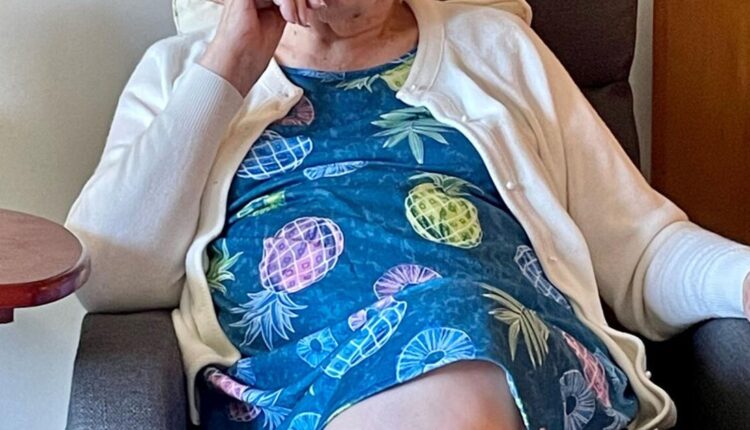 This year, July 25th marks a momentous occasion for Kenosha local Marie Goff – her 100th birthday! We caught up with Marie Goff at her apartment in Kenosha with her daughter Kristie, and granddaughter Simone. We played the 20 questions game with Marie, who shared with us her memories from her time in the SPARs, what it was like raising six children, and the key to living a long and happy life. Thank you, Marie, for welcoming us into your home and sharing with us your plethora of knowledge and experience!

“I never had time for many hobbies, because I had six children,” said Marie, “When I was young and living in Chicago though, I did enjoy the stock market. I worked in an office right across the street from the stock exchange, so I would go there during my lunch hour and sit and listen to what the men bought.”

“Well my husband lived next door growing up. We were always friendly neighbors, we went to St. George school together, and we used to go hiking a lot together. We would hike where Carthage College is now,” said Marie, “It was like a jungle then, not developed at all! We were just friends at the time though, he wasn’t a favorite yet.”

When was your first plane ride?

“I always wanted to ride in a plane, the first time I did was when I bought some liberty bonds. When you bought 10 liberty bonds, then you got to ride in an airplane!” said Marie, “It was only for about ten or fifteen minutes. I was probably about 18 years old.”

What was the most important invention in your lifetime?

“Somebody else asked me that recently!” said Marie, “We had a trolley that I would take to my job at the Jockey factory for 3 cents. That was a pretty big deal at the time.” When asked if that was a lot of money, Marie said, “Well it was pennies! I deal in pennies!”

What about your favorite foods?

“Ribs, pizza, smoked salmon,” said Marie, “It’s nice to order it, not make it myself. I never bothered to buy prepared food, I always had to cook for my family. We used to have dinner every night at 5 O’clock! That was when my husband would get home from work at American Motors.”

What inspired you to join the service?

“Well for one, I always wanted to,” said Marie, “Then my brother was a year ahead of me in school. He was just barely out of school that summer and they took him into the service. He didn’t have time for anything, they just took him the day after he graduated from High School. He never got to come home, aside from in a coffin. When he was killed in the service, that’s when I became determined that I would join too. I was working in Chicago and I joined the SPARs. There was no place to join in Wisconsin!”

What was your favorite memory from your time in the SPARs?

SPARs – An all-women’s division of the US Coast Guard which replaced traditionally male personnel roles with women. SPARs was established by the United States Congress and signed into law by President Franklin D. Roosevelt on November 23, 1942. Stationed in Seattle, Washington, Marie joined at 22 and worked at the “Ship’s Store” during her time in the SPARs. “I had a really good time. We went for an initiation in Palm Beach, Florida before I was stationed in Seattle. I made friends with a lot of the girls, especially the ones I lived with. There were six of us! We had nicknames for each other – Mine was Dusty!”

“I never really had a car, I drove my father’s car. That’s how I got my license,” said Marie, “My father never really minded if I used the car. He never used it often.”

Which election was the first that you voted in?

“I don’t exactly remember the first,” said Marie, “but I know I voted for Kennedy! I felt very bad when he was killed.”

How have the lives of women changed from when you were young until now?

“We minded our parents quite a bit more. I come from a big family,” said Marie, “We got along very frugally. I never believed in women working and not being home with their family. Now the mothers have to work and the caregivers are paid.”

What was the first movie you saw in theaters?

“I was very lucky that my brother worked for Orpheum Theater. We could get in free to movies,” said Marie, “We didn’t try to do it too often, and I don’t remember the first I saw, but we loved Shirley Temple!”

“I did when I worked in the office at Jockey,” said Marie, “I don’t use it much now. I watch TV, but only my favorite ones. Mostly western movies.”

What was your favorite, and least favorite year?

“1968! I never liked that year. There was a lot going on in the world at that time. The only good thing that came of it was my granddaughter Simone,” said Marie. “One of my favorite years was when my husband and I went to college together at Carroll College in Waukesha. My husband and I were just about the only married couple in the whole school! I liked my time at college but I didn’t get to spend much time there, I got busy with kids.”

What does a day in your life look like today?

“Well Sandy, my caretaker, helps me everyday. We live together, and she helps me a lot with cooking and things. I’ve known her since she was a little girl. She tries to get me out walking but I don’t always want to,” said Marie, “Otherwise, I always have my coffee in the morning, I take a nap and have a visitor, and on Wednesdays at 10AM Jeff comes from the church and gives me communion.”

What was it like going to high school at Bradford?

“Well we could pick our subjects at the time and I really liked shorthand and typing,” said Marie, “That’s really all I remember about the subjects I took.”

“I kind of think it’s because I came from a large family. That was a role model for me, I had a large family myself. We were always together, and we did a lot of things together,” said Marie, “My husband and I used to walk together at Petrifying Springs with the kids. My husband would walk in the front of the line, and I would walk at the end. Having a big family definitely kept me young- And the home cooked meals!”

“Oh yeah! I loved it. I did all the cooking. At one point, when my children were in school, they would come home for lunch and it was never just sandwiches. It was always something really nice, a hot home cooked meal.

When did you take your first vacation?

“We never went on vacations growing up, we really never had the time.” said Marie, “When my kids were grown up, my husband and I would take them to Door County. My husband would bring all the bikes and our small boat. Those were great memories.”

If you could travel anywhere now, where would you go?

“I used to like to go to all the little islands off of Washington when I was in Seattle with the SPARs,” said Marie, “There were a lot of little islands there, and we would all go to them during our time off on the weekends just to explore.”

What advice do you have for younger people?

“My advice is to travel – Go and see what is out there!” said Marie, “When I was in the service we would sometimes go on fishing trips, and horse riding. I loved getting to have those experiences.”

This year, Marie will be celebrating her 100th birthday with a big family party. “They’re coming from all over the world! All my grandchildren, all my grandchildren’s children,” she said. The coast guard is also scheduled to make an appearance at Marie’s birthday party for an honorary salute, much to her joy. “We had a great big cake for my 99th birthday party, so we’re going to need another great big cake for this party with all these people! I just hope it’s as good as the last one.” Marie’s granddaughter Simone has confirmed that there will in fact be an even bigger – and better – cake for Marie’s 100 year celebration. Thank you, Marie, for being such a good sport during our 20 questions. Happy 100th birthday!