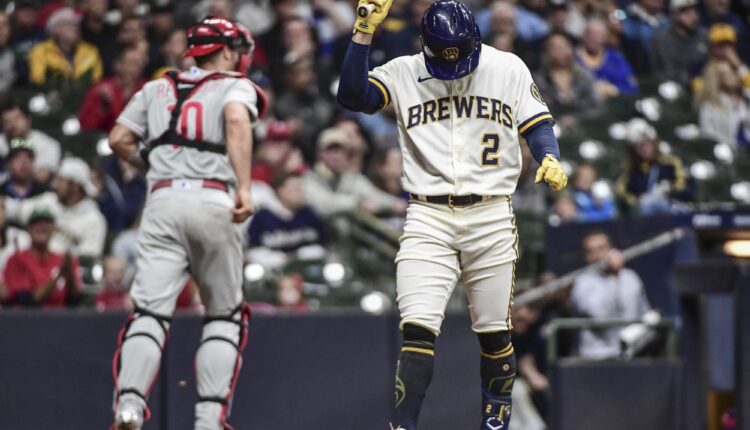 Although the Milwaukee Brewers had dropped the final two games of their series against the Chicago Cubs, they had completed what many would consider a successful 11 ​​game road trip, going 6-5 and doing so without some key members of this team at various points, including Willy Adames, Hunter Renfroe, Freddy Peralta, and Brandon Woodruff.

Next up for the Milwaukee Brewers was a seven-game home stand against San Deigo and Philadelphia, which also included a much-needed day off this past Monday.

However, it ended up being a very disappointing home stand, to put it mildly, and one in which the bats went ice cold.

Although the Brewers won their opening game against the Padres, it required them to score four runs in the ninth inning to do so, after they had scored just one run in the first eight. And following that game, Milwaukee would lose their next six games in a row.

Over the seven-game stretch, the Brewers would score 14 total runs, including only nine in the final six games, while the pitching staff gave up 36 total runs. And if we don’t include the four-run ninth inning against San Deigo, Milwaukee scored 10 runs in a 62 inning span.

While the Milwaukee Brewers have been able to find some success at the plate this season, their overall numbers at this point are a bit more reflective of where this team truly stands offensively. Currently, the Crew ranks 26th in batting average, 17th in OPS, fourth in strikeouts, and a respectable 13th in runs due to several big scoring outings.

At this time, Rowdy Tellez is the only Brewer with an OPS over .800, while five Brewers players who see regular playing time — including Christian Yelich — have an OPS below .700.

Now, if you’re looking for a silver lining or two, one is that Omar Narvaez should be returning to the lineup soon. Secondly, in addition to Milwaukee having a rough week, the entire NL Central has taken some lumps as of late as well.

Every team is currently on a losing streak of at least two games, and the Brewers still hold a half-game lead over St. Louis for the division lead, while Pittsburgh remains seven games back and the Chicago Cubs 8.5.

Unfortunately for Milwaukee, from a schedule standpoint, things aren’t going to be getting any easier for the remainder of June. On the calendar, the crew still has to play the New York Mets on the road, a four-game series with St. Louis, three games with Toronto, and then another three games on the road against Tampa Bay.

With all of that said, the MLB season is a long one, and naturally, there are going to be stretches like this for every team–and probably more than once.

However, the concerning part is that over the last year-plus of Brewers baseball, these stretches where the offense goes ice cold have happened just a little too frequently — including in last year’s playoffs — and a consistent solution continues to elude them.

All stats courtesy of Baseball Reference