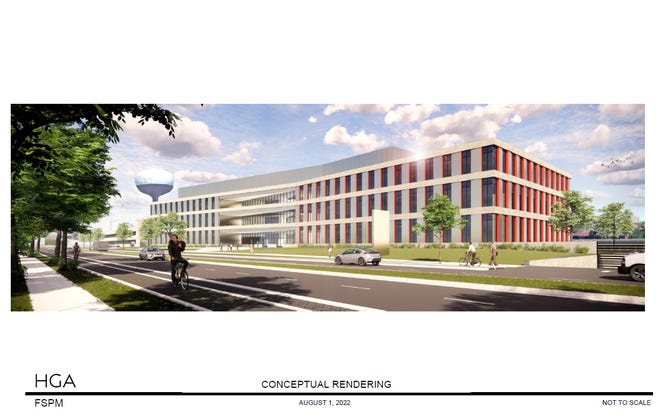 The Milwaukee County Medical Examiner’s Office has moved one step closer to exiting its disintegrating building with a vote by a key task force to put $20 million in federal pandemic aid toward a new facility in Wauwatosa.

Medical examiner Brian L. Peterson told the county’s American Rescue Plan Act Task Force on Thursday that recruiting forensic pathologists is a significant hurdle for him, and the state of his building near the courthouse only exacerbates that challenge.

“People just don’t appreciate the cockroaches and the limited space and the crumbling infrastructure and all that,” he said. “It’s frankly unpleasant. When you can walk into our front lobby and smell decomposed bodies on a lot of days, that’s just not good.”

Without a new building that allows for the recruitment of new staff, he said, “this operation will continue to fall apart.”

The office is located at 933 W. Highland Ave. in an abandoned hospital that was converted in 1989, and the county has been considering moving the operation to a new facility for a decade, according to a report to the task force.

County Office of Emergency Management Director Cassandra Libal, whose agency would also relocate to the new facility, expressed a need to move. She said having her office located in two separate places makes collaboration difficult, especially during major incidents, while the condition of the Safety Building was putting communications technology at risk.

And, she said, the office had been delaying technology upgrades to see what would happen with a new building.

“What we do not want to do is invest a significant amount of funds into a location that we will not be in the long term,” she said.

While the task force recommended setting aside the $20 million for the project, it also rejected a $19 million proposal for rehabilitating the Mitchell Park Domes that it was weighing simultaneously. The task force plays a key role in vetting and recommending spending proposals for the $183 million in American Rescue Plan Act funding the county has received.

Co-chair and county supervisor Shawn Rolland said the job of the task force is “not to just look at each one of these ideas in isolation” but to balance them against each other.

‘Incredible opportunity to bring all this together’

The task force on a 5-1 vote recommended setting aside $20 million toward a new Center for Forensic Science and Protective Medicine that would house the Medical Examiner’s Office and the Office of Emergency Management, as well as a new state Department of Justice crime lab.

It would be located on the Milwaukee Regional Medical Center campus in Wauwatosa, which is seeing nearly $800 million in new development.

The State Building Commission in August approved $99.5 million in state funding for the project.

Milwaukee County’s funding share could be as much as $127 million to purchase and outfit its portion of the building, Department of Administrative Services Director Aaron Hertzberg told the task force Thursday.

The county expects to occupy about 108,000 square feet of the planned 200,000-square-foot facility, according to a county report.

Hertzberg said the facility is “not a standard office building” in terms of structure or security needs but rather one built for very specific uses and intended to be “at the forefront of technology.”

The $20 million for the county’s portion of the project would reduce the total amount the county would have to borrow — and demonstrate a commitment to the joint project with the state, the task force heard.

“It’s been a challenge over the last five-plus years of trying to weave this partnership together of private sector involvement, the county and the state, who are somewhat unnatural partners,” Hertzberg said. “We feel like we have this incredible opportunity to bring all this together.”

The state and county would each own their portions of the building, which would be jointly managed through a condo association for common areas and overall building management. With regular care and maintenance, it is expected to last for more than five decades.

He noted the state had already made its full funding commitment and while the county still needs to do some work on its total costs, Hertzberg said the $20 million would be “a big, important step.”

That funding would come in addition to about $14 million the county has set aside for the project in previous years, plus nearly $1 million for design funds that are currently being spent, he said.

Staff are also looking for ways to decrease the costs of the project, including through medical examination fees, on-site parking revenues, use of reserves and more.

The plan is to begin construction in May and occupy the building in the second quarter of 2025, according to the report to the task force.

“The need to address the conditions of the current Medical Examiner space are urgent,” the report states. “Inflation of construction pricing and financing are also project drivers.”

The county’s funding share would need approval from the County Board and County Executive David Crowley.

While advocates for the Domes pushed for the funding, the task force quickly rejected the proposal after hearing from the Parks Department.

The county has struggled for years to chart a path for preserving the Domes as the Parks Department contends with a huge backlog of capital projects.

Supervisor Juan Miguel Martinez, the measure’s lead sponsor, said the funding would jumpstart other possible philanthropy by showing the county has a financial stake in the project and improve the area around the Domes.

But Deputy Parks Director Jim Tarantino raised concerns about the proposal, comparing it to putting a down payment on a home without having a mortgage approved or even possible.

“It should be surprising to you and all the members of the public listening that a department with a half-billion dollar deferred maintenance backlog is not actively advocating for a $19 million investment, but we feel that making this investment does not fundamentally change the quality of services that the public experiences without also a serious plan for addressing all of the Domes’ needs,” he said.

He said saving the Domes required a “serious plan” to save the plant collection, set the facility on a sustainable path operationally, reduce energy consumption and address the other tens of millions of dollars in repairs that are needed to keep the Domes open.

The money would not go as far as the public expects and would be ineffective in the sense that it would be aimed at addressing only one part of an interrelated system, he said.

In a statement late Thursday, Martinez slammed the task force’s rejection of the Domes funding and its simultaneous consideration of the two spending proposals.

“While I support Milwaukee County constructing a new facility for the Office of the Medical Examiner, and the Office of Emergency Management, pitting these two items against one another was a calculated way to justify not funding our Domes,” he said in the statement.