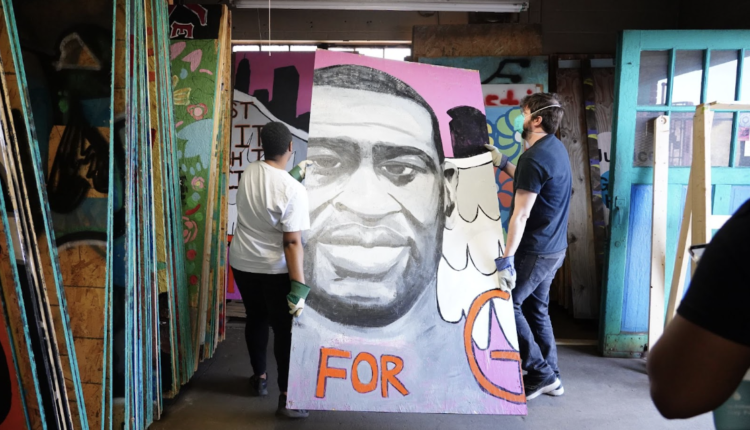 In 2020, Semhar Solomon, an 18-year-old activist from St. Anthony, Minnesota, painted a mural on four 4 x 8-foot plywood sheets to honor Philando Castile, who was killed by former St. Anthony police officer Jeronimo Yanez. After she carried it to local rallies, residents offered to take turns displaying the painting in front of their homes. It became a traveling artwork.

“Art is a powerful form because it tells a story without your presence,” Solomon said. “It extends the conversation without the exhaustion of being redundant.”

As winter approached that year, Solomon found herself scrambling to find a way to preserve the mural. That led her to Memorialize the Movement, a project to preserve and exhibit plywood art created during the 2020 unrest that followed the murder of George Floyd by a Minneapolis police officer.

The collection is meant to keep the conversation about race and police brutality going, during a time when many feel the momentum has been lost.

Memorialize the Movement hosted its first large-scale public exhibition of plywood art in 2021. “Justice for George: Our Strength, Our Story,” their second exhibition, opened recently in Phelps Field Park, steps away from where George Floyd was killed.

“After 2020, a lot of people were like, ‘Okay, racism is over,’” said Amira McLendon, the exhibition’s co-curator.  “It’s as if we only talk about injustice after someone is hurt, rather than being proactive in preventing it from happening again. So I hope the exhibition can start the conversation again.”

In the summer of 2020, the video of Floyd’s death while his neck was pinned to the ground by a police officer’s knee sparked outrage throughout the country. Concerned about vandalism, many business owners affixed plywood sheets to their storefronts. These boards erected to protect buildings became vehicles of expression for devastated and angry marchers.

When the city reopened after the COVID-19 pandemic, the businesses were at a loss about what to do with the wooden planks. So, Memorialize the Movement founder Leesa Kelly and her friends began strapping the murals to the tops of their cars. She eventually set up a social media page to recruit more volunteers, moving the piles of boards to their building, labeling and organizing them according to where they came from in the city.

More than 1,000 pieces of plywood art are now stored in an industrial building in the arts district of northeast Minneapolis. Piles of painted plywood boards lean against every available wall space. There are portraits of Floyd’s unsmiling face among them, as well as paintings of fists raised in the air. One board is blue and says, “Silence Is Betrayal,” while another says, “Please Don’t Hurt Us.”

Other organizations are also working to preserve Floyd’s legacy through art. George Floyd Square at 38th Street and Chicago Avenue is filled with murals, fist sculptures, and a symbolic cemetery that displays headstones with the names of 100 Black people who were killed by the police, from Breonna Taylor to Amir Locke.

The city of Minneapolis is working with the community to redesign and rebuild this area, with the goal of incorporating a memorial site into the square.

Kelly, however, is opposed to the government being involved in the memorialization process. She believes that the art born out of the 2020 protest should be in the hands of the Black community, and that they should be the ones telling the story of George Floyd and the following uprising.

“Our work is intended to honor the murals’ original purpose, which was to protest and memorialize this time and place in history,” Kelly said. “The city and institutions…have a history of excluding and marginalizing Black and brown artists’ work. Why should we trust them that they will do the right thing this time?” 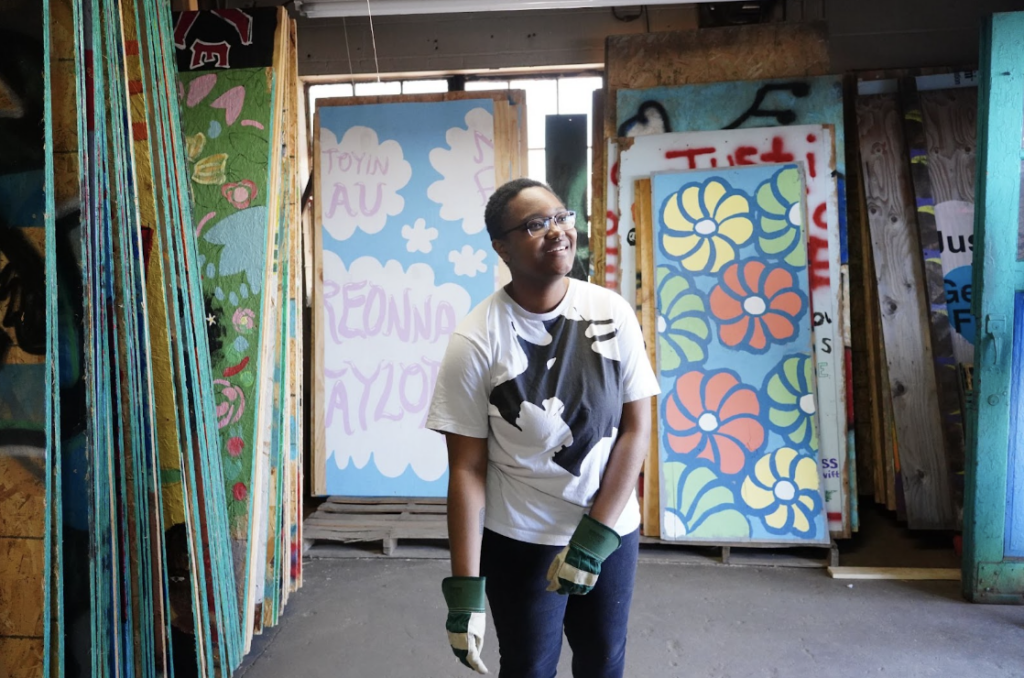 When Solomon, the 18-year-old activist, first proposed in 2020 a mural honoring Castile not on the plywood, but outside City Hall, the city rejected her idea. Council members told her that it would set a problematic precedent, and the mural would further divide the community.

One of Memorialize the Movement’s missions is to highlight Black artists and Black arts organizations. Kelly said it has been difficult, given the city’s relatively small Black population.

The exhibition’s co-curator, McLendon, was struck by how few plywood pieces are created by artists of color. About 75% of the murals were created by white people, making it difficult to center the exhibition around Black artists.

McLendon, a 21-year-old art student at the University of Minnesota, said it felt especially important to bring the exhibition to light at this moment, as the urgency of reform seems to fade. Last year, McLendon said, she could easily find volunteers and money for their memorializing effort. Now, even finding volunteers has become difficult.

People at Memorialize the Movement recognize that plywood is not the best medium for preserving art. It can warp easily if the pieces are improperly stored or exposed to moisture. But they also see beauty in the texture’s fragility, echoing the movement’s unstable nature.

“Our fight for justice has been ongoing, and the flame constantly gets extinguished, until something happens to reignite it again,” said Kelly, the founder. “In many ways, plywood is the perfect embodiment of this movement. It’s finicky, it’s fragile, but it works. It’s imperfect, but it’s durable.”

This story originally appeared in the Minnesota Reformer, a States Newsroom outlet.